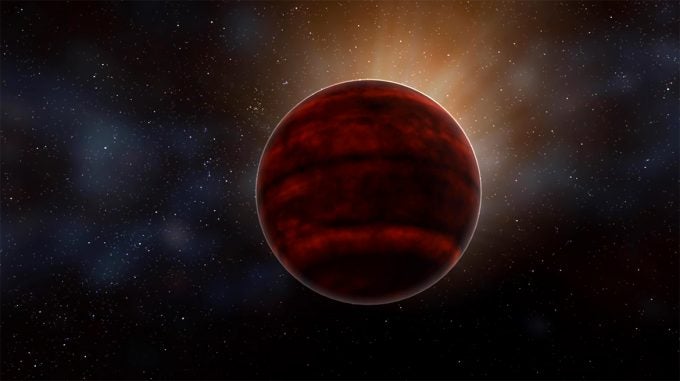 There’s a planet just over 4 light-years away orbiting a star at just the right distance—not too close, not too far—that it could support liquid water on its surface. We don’t know much about its atmosphere, if it even has one, and we’re trying to figure out more about its interior. There’s a lot more to uncover, but it sure sounds like it could be a promising place to find some alien neighbors, right?

If only we could figure out how to deal with the massive stellar flares.

A study published this week in The Astrophysical Journal Letters found that instead of a nice warm ring of dust around the star—which could indicate a cozy nursery of planets, as a study last fall reported—there was actually a huge stellar flare. (That’s the same as a solar flare, but on a star other than our own Sun).

It was the dust study that originally intrigued Meredith MacGregor, an astrophysicist at the Carnegie Institute who studies debris discs around other stars.

“Our solar system has discs, we have the asteroid belt and Kuiper belt, which we think are leftover material from when our planetary system formed. The ability to look at other stars and see the same structures is pretty exciting,” MacGregor says.

She’d looked at stars like Proxima Centauri before, and knew that they could be incredibly active—frequently firing off radiation-laden flares across many wavelengths of light, including the millimeter wavelength, which is often used to detect dust in other star systems.

“I was curious whether there was any possibility that the star had any major activity during these observations, and whether that had affected the results,” MacGregor says.

So she decided to dig into the data used in the previous study. The team had used 15 observations made over three months, totaling 10 hours of watching Proxima Centauri. For the most part, the star was quiet.

“In most of the observations the star wasn’t doing anything very exciting at all,” MacGregor says. “But for two minutes it had this massive brightening, and you can trace the evolution of the flux over time.”

That short period of brightening was a stellar flare. The previous study, MacGregor says, looked at the combined total of observations and interpreted the increased brightness as a potential planetary system, including a ring of star-warmed dust near the interior. That’s what the ALMA observatory looks for. It searches specifically for signals in the millimeter wavelength of electromagnetic radiation—similar to what comes out of your microwave.

“We’re probing different sized populations of grains by looking at different wavelengths,” MacGregor says. “The rule we use when observing systems is, the wavelength of the light that we’re looking at is the size of the grains that we’re seeing. So in the millimeter wavelength we’re tracing millimeter sized dust particles or ice particles.”

That’s important for understanding the underlying structure of stellar systems. But there are plenty of other things that show up in the millimeter wavelength, including stellar and solar flares.

“If you compare the absolute brightness of this flare to solar flares [in the millimeter wavelength], this flare we saw on Proxima Centauri is 10 times brighter than what we see on the Sun.” MacGregor says. But that doesn’t mean that this solar flare was 10 times larger than a flare from our Sun. This comparison is only for the millimeter wavelength, not all the other forms of radiation released by a flare event. Plus, the Sun and Proxima Centauri aren’t even in the same class of star.

“Proxima Centauri is an M dwarf, which is a much smaller star, and it has a much stronger magnetic field. We’re still learning a lot about how to compare the two different kinds of star,” MacGregor says.

Guillem Anglada, an astrophysicist and first author of the study that found dust in the Proxima Centauri system, agrees. “This is an important result that potentially will help to better understand the behavior of the atmospheres of M-dwarf stars. Proxima Centauri is the star closest to our Sun, and therefore an excellent laboratory to learn about the more distant ones,” Anglada says in an email.

Proxima Centauri captures our attention because it’s the closest star to our own, and it has a planet situated in just the right orbit to support liquid water. But Proxima b having an atmosphere—which is crucial to maintaining liquid water—becomes doubtful as solar flares increase.

“We caught this one flare in 10 hours of observing time on ALMA. Either it’s an incredibly lucky event, or chances are flares of this magnitude are happening pretty frequently on Proxima Centauri,” MacGregor says. “That would likely mean bad things in terms of the atmosphere of the planet, I would hazard to say.”

Large solar flares are typically accompanied by coronal mass ejections, or huge eruptions of heated, charged particles from the sun. If CMEs accompany flares on Centauri, the combo could not only bombard the planet with radiation, but also strip away any atmosphere.

“We don’t know yet whether flares on M dwarfs are also accompanied by coronal mass ejections. That’s kind of an open question,” MacGregor says.

Anglada says that he and his colleagues had also unexpectedly found the flare in a subsequent analysis of the data, independent of MacGregor’s work. “Our new estimates indicate that the amount of dust might be about one half our previous estimate, but we are still working in confirming this value. On the other hand, the paper by MacGregor et al suggests that the close environment of Proxima Centauri could be devoid of dust. The two studies have been carried out with a limited dataset obtained in an exploratory program. New observations with better sensitivity could provide resolved images that would definitely establish the architecture and main properties of the system.” Anglada says.

New observations will certainly be conducted, with plenty of interest in Proxima Centauri from both the public and the scientific community.

“A lot of questions need to be answered. This new result and the previous report with ALMA show that we know very little about our closest neighbors, and that we need to be especially careful and thorough in interpreting the data,” says Guillem Anglada Escude, an astrophysicist who helped discover Proxima b but who was not involved in the most recent study. (No relation to Guillem Anglada.)

Those questions include how frequent flares are, what their nature is, whether there might be other, cooler, debris discs further out in the Proxima system, what Proxima b is really like, and whether it has any planetary company. None of those answers will be easy to come by, but that makes hunting for them all the more exciting.