Hubble just captured a lunar eclipse for the first time ever

The act could even reveal how to look for life on alien planets. 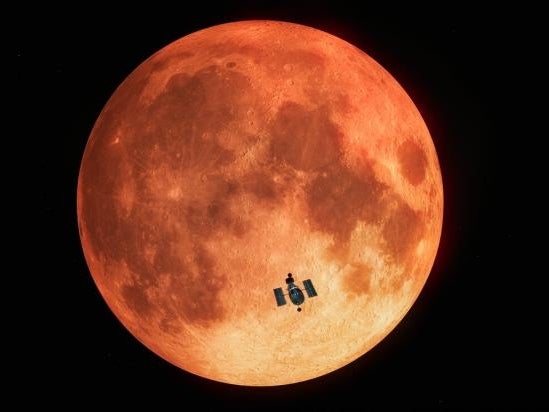 In the search for life in far-flung worlds, astronomers are harnessing a very large and nearby tool—our very own moon.

During a total lunar eclipse last year, astronomers trained the Hubble Space Telescope on our moon, which served as a giant lunar mirror. This marks the first time a space telescope captured a total lunar eclipse, and the exercise may even help us track down life elsewhere in the universe.

Hubble’s observations of this display of cosmic clockwork, which were the first of its kind, were detailed in a study published last week in The Astronomical Journal.

“We wanted to treat Earth as an exoplanet and observe a part of Earth’s spectrum that had never been observed before in this way,” says Giada Arney of NASA’s Goddard Space Flight Center, a co-author of the science paper. That way, the technique can be applied to actual exoplanets down the line.

Earth serves as the perfect—and only—analog for finding life on other planets. Researchers realized the light reflected off of the Moon would resemble something they’re currently on the hunt for: light streaming through the atmosphere of a far off world while it’s transiting in front of its host star. It’s a similar geometry of what happens during a local lunar eclipse, Arney says. In other words, researchers were looking to understand what our own planet might look like if an alien observer were peering at Earth from light-years away.

Thanks to Hubble’s stare, scientists were able to parse out a key chemical during the eclipse: ozone. Previous detections of the Earth’s ozone layer have always been from our side here on the ground, accompanied by distortion from other parts of our atmosphere. From its unique vantage point in space, Hubble was able to eliminate that distortion by scanning for ultraviolet light bouncing off the moon during the eclipse. Ozone is three oxygen atoms bound together; it’s produced when the sun zaps molecular oxygen, O2, with ultraviolet light, rearranging that duo of atoms into a trio—crafting ozone. A massive web of ozone molecules known as the ozone layer serves as a protective shield from the Sun’s ultraviolet radiation.

“These new observations by Hubble demonstrate that a sufficiently powerful observatory would be able to identify the fingerprints of ozone in the spectrum of a distant Earth-like planet transiting its host star,” says Edward Schwieterman, assistant professor of astrobiology at the University of California at Riverside who was not involved in the study. “The study is an important contribution to the field as previous observations of Earth’s transmission spectrum have mostly been in the near-infrared where ozone absorption is less notable.”

We already knew that ozone surrounds Earth, of course. But the new study represents the strongest detection of the molecule to date. Hubble was able to look at the ultraviolet light part of the spectrum, which is absorbed by our atmosphere and can’t be observed by ground-based telescopes.

The new observation was also a proof-of-concept for future exoplanet observations. According to Arney, the new data is now our “ground truth,” or a sort of baseline of expectations, and researchers have models that they want to test against that ground truth.

“Someday, we’re going to be observing exoplanets where we don’t know what the ground truth is,” Arney says. “With studies like this, we can then use it to better validate and improve the models that we’re going to use in the future.”

That someday is inching closer and closer as astronomers usher in a new era of exoplanet research. To date, they’ve catalogued more than 4,000 exoplanets outside our Solar System. A new generation of space observatories such as the much-awaited planet hunter James Webb Space Telescope, set to launch in October 2021, could use this method to unlock the secrets of other Earth-like worlds.