And you thought this summer was hot 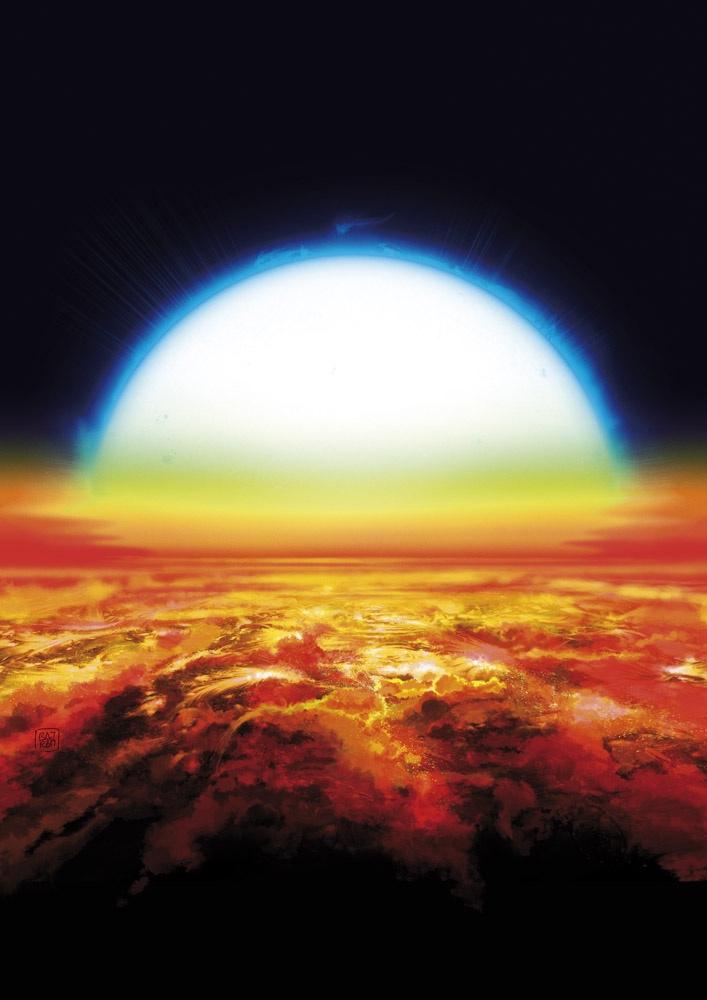 For the first time, astronomers have detected iron and titanium vapors in a planet’s sky—the metals glowing hot like the filaments in a light bulb in the searing atmosphere. The strategy used to make this discovery might one day hunt for signs of life on alien worlds, researchers added.

Scientists investigated the exoplanet KELT-9b, the hottest alien world discovered yet, with daytime temperatures reaching more than 4,300 degrees C, hotter than many stars. This planet is located about 650 light years from Earth in the constellation Cygnus the Swan. It circles the young blue star KELT-9, which is nearly twice as hot as our sun. KELT-9b, which is about 2.8 times Jupiter’s mass, orbits its star roughly 10 times closer than Mercury does the sun.

KELT-9b belongs to a class of worlds known as ultra-hot Jupiters that blur the lines between stars and gas giants. The scorching heat of these exoplanets gives researchers an exceptional opportunity to analyze the ingredients of their atmospheres. When chemicals are heated, they each can give off a unique pattern or spectrum of light that can help identify them like fingerprints. The fact that such Jupiter-like worlds are ultra-hot means that atoms or molecules that might not ordinarily reach high enough temperatures in regular planets to give off light, such as iron, might emit detectable spectra.

Now exoplanet astronomer Jens Hoeijmakers at the Universities of Geneva and Bern in Switzerland and his colleagues have detected light from iron and titanium from KELT-9b. Using Italy’s Galileo National Telescope on the Canary Island of La Palma on the night of July 31, 2017, they detected the spectra of neutrally charged iron atoms and positively charged iron and titanium ions. Their results were published this week in Nature.

“It is the first time that iron and titanium have been robustly detected in the atmosphere of any planet beyond the solar system,” said study co-author Kevin Heng, a theoretical astrophysicist at the University of Bern in Switzerland.

Indeed, since none of the worlds in the solar system are hot enough to possess iron or titanium vapors in their atmospheres, this is the first time such metal gases have been detected in the sky of any planet, said astronomer Laura Kreidberg at Harvard University, who did not take part in this research. “You have to have insanely high temperatures — more like stellar temps than planetary — to get these elements in gaseous atomic form,” she said. “”It’s a very exciting result!”

The material in KELT-9b almost certainly had a common origin with its star. “Our understanding of exoplanet formation tells us that the star and the exoplanet formed from a common disk of dust and gas,” Heng said. “Deciphering the chemical composition of KELT-9b’s atmosphere will give us some chance at understanding its formation history.”

Normally, a major portion of the atoms and molecules making up a planet are hidden in clouds or deep under the atmosphere. Think of Earth—most of the molecules that make up our planet, from the core to the surface, aren’t represented in the atmosphere. In contrast, KELT-9b “is so incredibly hot, all the atoms and molecules are uniformly mixed through the atmosphere,” Kreidberg said. “We can therefore see the raw materials that the planet is made of. This planet is an unmatched laboratory for studying the building blocks of planet formation.”

While Kelt-9b is too hot to ever support life as we know it, the strategy used to detect iron and titanium in KELT-9b’s atmosphere “is the same exact technique that can be used to detect molecules interesting for biology in a future, yet-to-be-discovered exoplanet,” Heng said, such as oxygen or organic molecules. “You can say that hot exoplanets are a training ground for us to hone our techniques and prepare for the exciting targets to emerge in the coming decade.”