The unique system could teach us about how planets are born. 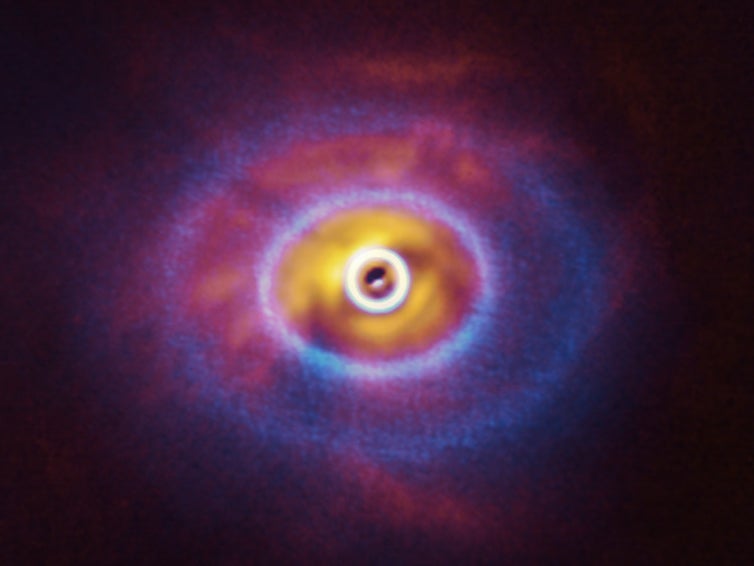 ALMA, in which ESO is a partner, and the SPHERE instrument on ESO’s Very Large Telescope have imaged GW Orionis, a triple star system with a peculiar inner region. Unlike the flat planet-forming discs we see around many stars, GW Orionis features a warped disc, deformed by the movements of the three stars at its centre. This composite image shows both the ALMA and SPHERE observations of the disc.  The ALMA image shows the disc’s ringed structure, with the innermost ring (part of which is visible as an oblong dot at the very centre of the image) separated from the rest of the disc. The SPHERE observations allowed astronomers to see for the first time the shadow of this innermost ring on the rest of the disc, which made it possible for them to reconstruct its warped shape. ESO/Exeter/Kraus et al., ALMA (ESO/NAOJ/NRAO)
SHARE

About 1,300 light-years away, a young triple-star system is warping and splitting a disk of dust and gas where planets could one day form. Unlike the flat disk that gave rise to the planets in our own Solar System, the system’s disk consists of three misaligned rings.

GW Orionis, as the wonky system is known, consists of two stars locked in a close do-si-do that are orbited by a third star farther out at a distance of eight times that of Earth to the sun. According to new research, as the stellar trio move in their complicated paths, their gravities tug on the gas around and between them. The findings, published in Science last week, provide the first concrete evidence that stars’ gravities can carve bizarre and fantastic shapes in planet-forming disks, providing new insight into how planets are born in bizarre orbits.

“This is the first time that we see this disk-tearing effect in a real astrophysical system,” says Stefan Kraus, professor of astrophysics at the University of Exeter and lead author of the paper. “We can directly link it to the gravitational influence from the three stars that are in the center of the disk.”

There are three separate rings with different orientations in the massive protoplanetary disk of the triple system, located roughly 46, 185, and 336 times the Earth-Sun distance from the disk’s center. (For perspective, Neptune is about 30 times the distance from Earth to the sun.) Properly envisioning the shape and cause of the system’s misalignment meant studying GW Ori for a staggering 11 years—one complete orbital period—using different instruments on the Very Large Telescope (VLT) and the Atacama Large Millimeter/submillimeter Array (ALMA). The extensive observations allowed them to reconstruct the three-dimensional structure of the disk torn apart by the influences of the three stars.

GW Ori has long been an exemplar for all the special dynamical effects that go on in such a system. But this is the first time there’s really been a clear picture of the system’s geometry: “This study is really a truly comprehensive look at the stellar orbits and the disk at very high spatial resolution,” says Penn State astronomer Ian Czekala, who was not involved in the study.

An independent team of researchers had also examined GW Ori and its tilted discs in a study published in May. However, the researchers speculate that a separate, existing planet may have caused the disk to be torn apart in the first place—not only by the star trio. “Our simulations show that the gravitational pull from the triple stars alone cannot explain the observed large misalignment,” says Nienke van der Marel, co-author of the May study, in a press release. “We think that the presence of a planet between these rings is needed to explain why the disc was torn apart.”

Kraus and his team don’t rule out a planet as a potential cause: The system’s inner ring has enough dust to build 30 Earths, which he says is sufficient to form a planet within the ring. He adds that a planet formed in this misaligned part of the fractured disk would have a highly unusual orbit.

“What we find here is that multiple stars can move material out of the disk plane and put it onto these extreme oblique orbits,” Kraus says. “That’s a completely new mechanism for forming wide separation planets on misaligned orbits; you can basically get any orbit orientation with this mechanism.”

Future studies will have to determine for certain what is happening in the cattywampus system. With the next generation of telescopes like the European Southern Observatory’s Extremely Large Telescope (ELT) scheduled to come online in 2025, the hunt for young, wonky-ringed stellar systems like GW Ori should pick up steam.