The universe was filled with fog until three galaxies started clearing it out. 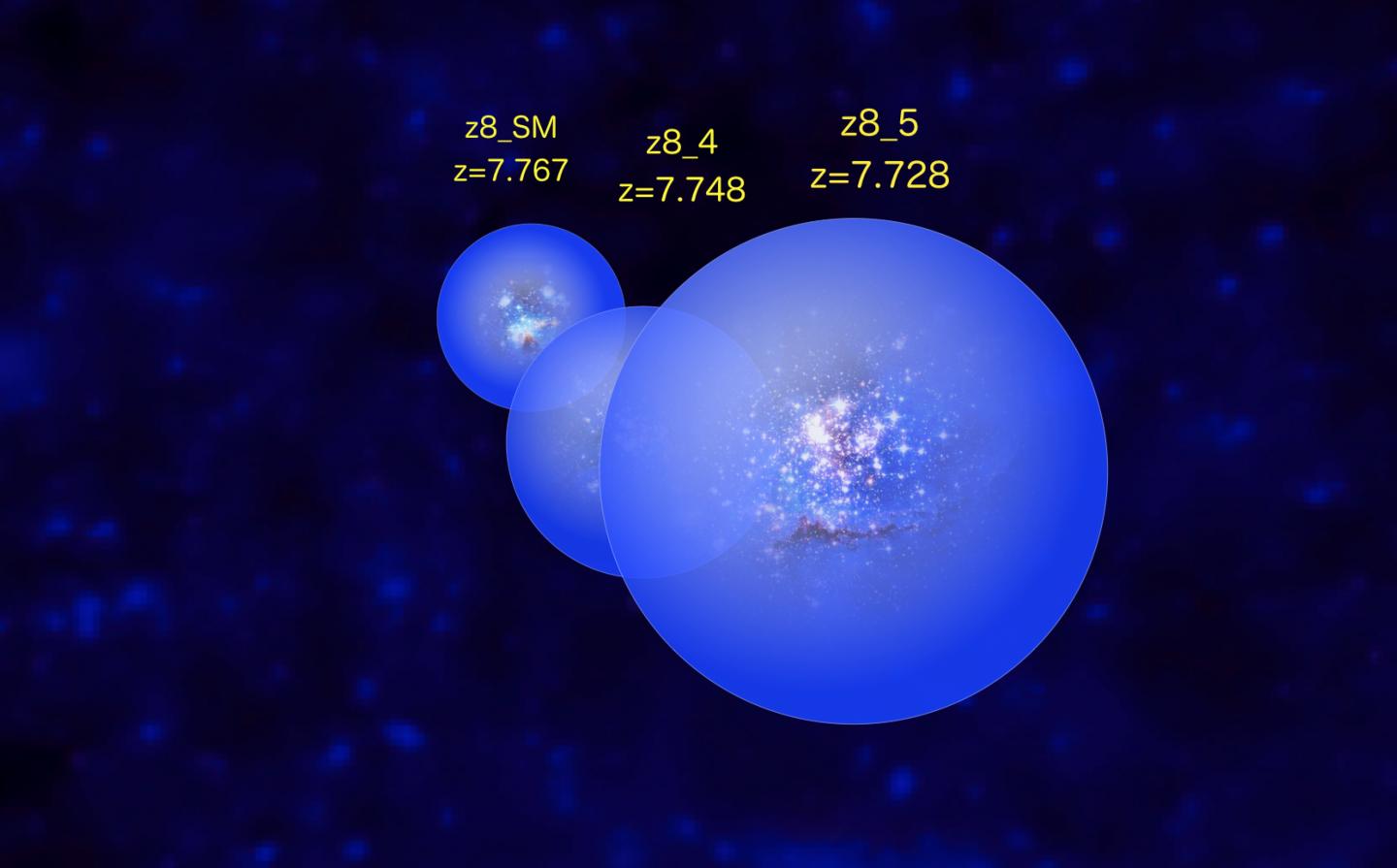 Space looks empty from an everyday perspective, but those vast stretches of nothingness between galaxies are actually filled with something like an extremely thin gas—a smattering of protons and electrons with dashes of more exotic elements. As insubstantial as it is, that cosmic substance has undergone two complete makeovers over the universe’s history—and researchers just got their first concrete look at how the second transformation came to be. The work is a step toward figuring out when early stars gave the universe its current form.

“This is one of the things we don’t know at the moment,” says Garth Illingworth, a Professor Emeritus at the University of California Santa Cruz, who was not involved with the research.

The first makeover happened hundreds of thousands of years after the Big Bang, when the cosmos’s protons and electrons paired off into hydrogen atoms as things cooled down. At this point most colors of light in the Big Bang’s afterglow could move freely without banging into interfering particles that would obscure them from view, and the universe became largely transparent. But all those electron-proton couples formed an omnipresent hydrogen fog that stopped one particular ultraviolet hue from breaking through. For hundreds of millions of years though, it didn’t matter, because without stars darkness reigned.

The second transformation began when gargantuan stars sputtered to life, monstrosities compared to our modest sun. After organizing themselves into the first galaxies, they set about ending the “cosmic dark ages,” filling the void with light and transforming the entire substance of the universe yet again.

As the violently energetic light from these galaxies penetrated deeper into the darkness, it ripped apart the hydrogen atoms it encountered, leaving behind regions filled with the crystal-clear proton-electron substance that fills the universe today. When did this clearing start? How quickly did galaxies open up the space around them? We don’t know enough to say, but on Thursday at the American Astronomical Society’s conference in Hawai’i, astronomers presented the first observations of a trio of galaxies inflating bubbles of clear space around them and pushing back the hydrogen fog.

“That’s exciting because we’re catching them in the act [at a time] when the bubbles were relatively rare,” says Sangeeta Malhotra, an astronomer at Arizona State University who worked on the new study.

The key to spotting the dim flickers from this so-called “cosmic dawn” is to look deeply into the sky (because the light from more distant galaxies has been traveling longer to reach us, letting us view them as they were in the past) for a certain color of ultraviolet light: the Lyman alpha line. Light waves of this type can’t get through the hydrogen fog, so any stars or galaxies sitting in that early pea soup remain invisible. But these three galaxies in particular had cleared out large enough bubbles for Lyman alpha light to escape, setting off on a journey that would end in present day Arizona at the Kitt Peak National Observatory. Painstaking follow-up observations from the Hubble Space Telescope and the Keck Observatory on Hawai’i confirmed that the astronomers had found those earliest cosmic beacons.

“It took many hours of deep observations because these galaxies are faint,” Malhotra says. “They’re more than 13.1 billion light years away.”

Dubbed EGS77, the trio was shining just 680 million years after the Big Bang (compress the universe’s 13.8-billion-year history into a calendar year and they would have been active by mid-January). While instruments can’t detect the bubbles directly, the fact that any Lyman alpha-colored light from EGS77 reaches Earth at all proves that they must have been present.

The team calculated that the largest galaxy of the three had cleared out a space about 3 million light years across, creating a bubble that, crucially, overlapped with the bubbles of the fainter galaxies. Clearing out more fog collectively let their light shine through more brightly than they could have otherwise. “The larger galaxies are making large bubbles that the smaller galaxies are exploiting,” says Illingworth.

Earlier galaxies have been found before, but not ones shining as clearly in the Lyman-alpha color—a possible indication that those younger galaxies had not yet blown substantial bubbles.

EGS77’s neighbors would have then cleared their local regions of hydrogen gas too, until all the bubbles merged, permanently transforming the hydrogen gas throughout the entire universe. Malhotra likens her team’s work to watching campers make fires on distant fog-enveloped hills. At first you can only see a dim glow, but eventually enough fires dissolve away the fog and the entire hillside becomes clear.

“It’s hard work doing anything out in this first billion-year timeframe,” Illingworth says. “They deserve significant credit for this contribution to the field and to our understanding of this area.”

Next, Malhotra says she’s searching for galaxies a bit closer (and therefore a bit more recent). At this point the cosmic hydrogen fog should be closer to lifting, although perhaps still lying thicker in places. By observing how well the Lyman-alpha light from these galaxies gets through, astronomers will measure how efficiently the first stars were able to transform the universe. Observations from the upcoming James Webb Space Telescope (JWST) will greatly support this effort.

“JWST will be what really makes the difference in unveiling what’s going on in the [the cosmos’s] first billion years,” Illingworth says.