Meteoric smoke could be key to putting clouds on Mars 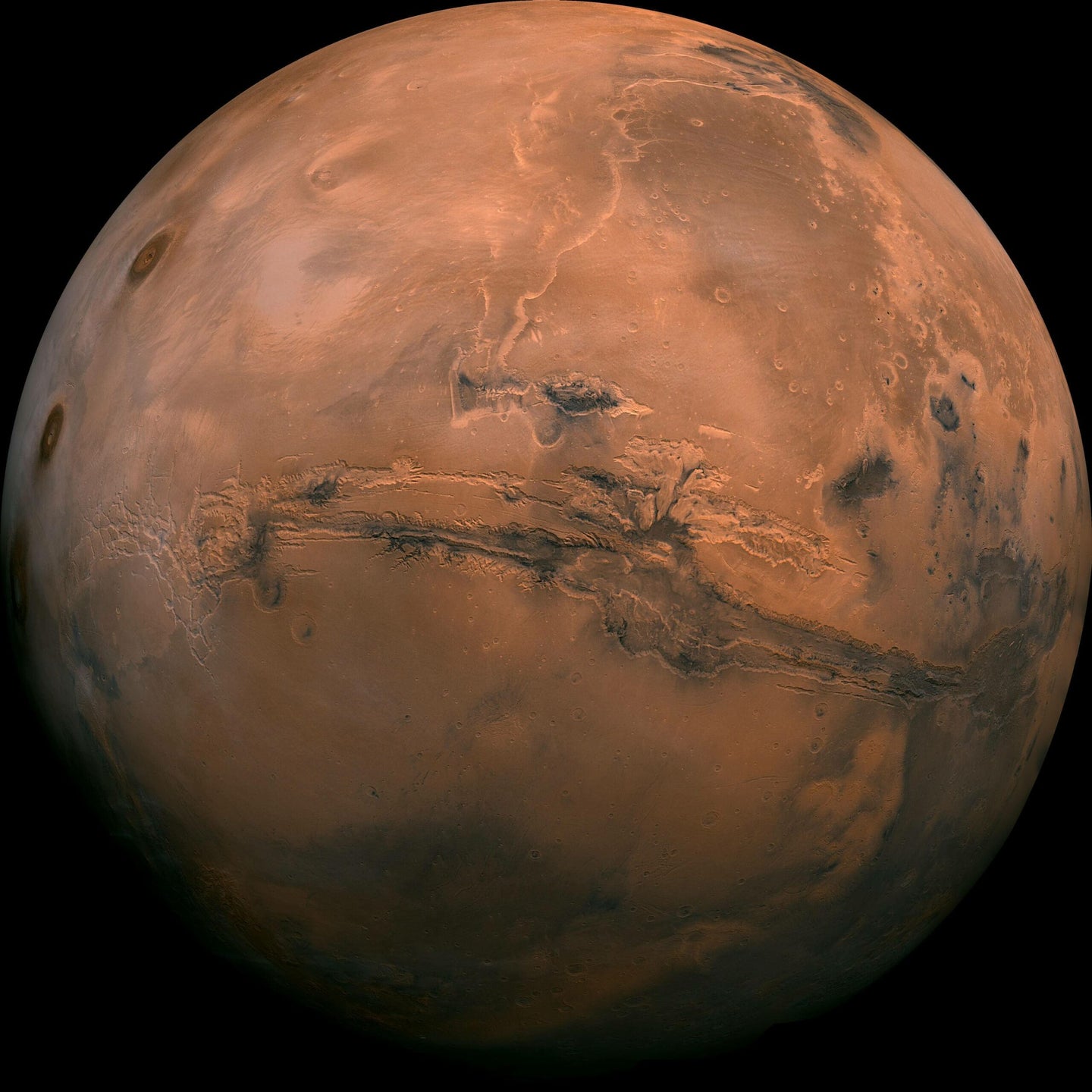 Martian clouds are certainly not as awe-inspiring as the ones we enjoy on Earth, but the fact that the planet is able to make them at all is quite remarkable. It’s a small, cold, hellishly dry red rock—a far cry from the warmer, wetter world it probably was billions of years ago. Its atmosphere is only 1 percent as thick as Earth’s. Scientists have always struggled to understand how Mars could continue to make clouds in spite of so much going against it.

It turns out the red planet as a little trick up its sleeve. In new findings published in Nature Geoscience this week, a group of scientists suggest that meteor impacts could be the key to Martian cloud formation.

“Clouds on Mars are extremely tenuous,” says Victoria Hartwick, a research assistant at the University of Colorado at Boulder and the lead author of the new study. They’re made of water ice like the ones hovering above Earth: droplets of water condense over a particle (often sea salt, smoke, or pollutants of some kind) and form a small nucleus of ice that continues to accrete more and more condensation. It’s been assumed for some time that mineral dust lofted up from the surface provided the only particles for seeding these clouds.

“That’s where the problem started,” says Hartwick. It’s easy to see how winds on Mars can lift dust up into the air by about a dozen miles. But clouds regularly form at stratas of up to 30 miles or so.

One clue as to how this might happen actually comes from Earth. The closest analog for Martian clouds that we have are the thin, wispy, high-altitude types, including noctilucent clouds. “Those clouds on Earth are very beautiful in the sky just after sunset, which is why they are called night-glowing,” says study co-author Brain Toon, also at the University of Colorado at Boulder. “Victoria knew these clouds on Earth form on debris from meteorites burning up in the atmosphere as shooting stars.”

The formal name for that debris is actually quite metal: meteoric smoke, a.k.a. the burnt-up byproduct of interplanetary dust grains originating from a meteor that rips through the atmosphere. “The smoke particles are incredibly small, perhaps ten times as big as an atom,” says Toon. “But for every shooting star, there are a lot of them.”

Mars is no stranger to meteoric visitors. And NASA’s MAVEN orbiter, tasked with studying the planet’s atmosphere and responsible for figuring out why Mars’ atmosphere disappeared, has previously found that the resulting icy grains can end up Mars’ atmosphere. Approximately 2.2 to 3.3 tons of dust grains originating from meteoric smoke falls into the atmosphere every Martian day.

“We wanted to add this source of high altitude ice nuclei to our model, to see if we could reproduce the observed middle atmosphere water ice cloud fields,” says Hartwick.

Hartwick and her team ran a series of computer simulations for cloud formation on Mars, and found that factoring in meteoric smoke led to the sort of middle atmosphere cloud fields observed time and time again. Inject some more meteors into the equation, and the resulting particles help provide seeds that allow ice nuclei to form well above 18 miles in the air.

For now, it’s not clear whether there are any fluctuations caused by seasons or other changes. Hartwick and her team suspect that events like a comet’s flyby would probably help deliver more dust to the planet and encourage more cloud formation. Clouds in the red planet’s atmosphere have been observed above 60 miles (largely invisible to the naked eye), but it’s not quite clear if meteoric smoke is a driver for their formation at such a high altitude. All of this still requires much more investigation.

But overall, the findings help to illuminate how important external variables are in governing the Martian weather and climate system—a huge realm of interest as humans make more serious plans to visit the red planet and one day put a settlement there. High-altitude clouds, for instance, have been shown in some models to warm the early Martian climate. “Early in the solar system’s history, the flux of meteoric material would have been higher, so cloud formation by this method could be more prevalent and potentially important,” says Hartwick.

Toon suspects an abundance in high-altitude clouds in the past might explain how Mars’ river valleys were able to form several billion years ago, at a time Mars should have been colder than it is now (since the sun was actually dimmer). This theory is not without controversy, since high-altitude clouds would have had trouble forming, but this newest understanding of how clouds in the middle strata are seeded might still apply to higher layers in the atmosphere.

Future terraformers, take note: “It is possible,” says Hartwick, “that clouds forming in the middle atmosphere could warm the planet above freezing,” a very intriguing prospect for anyone interested in making Mars habitable again. It’s hard to believe something as transient as a cloud could be such a big deal, but as with most things in science, it’s never a good idea to count out the small things.