It could join the ranks of Pluto and four others in our celestial neighborhood. 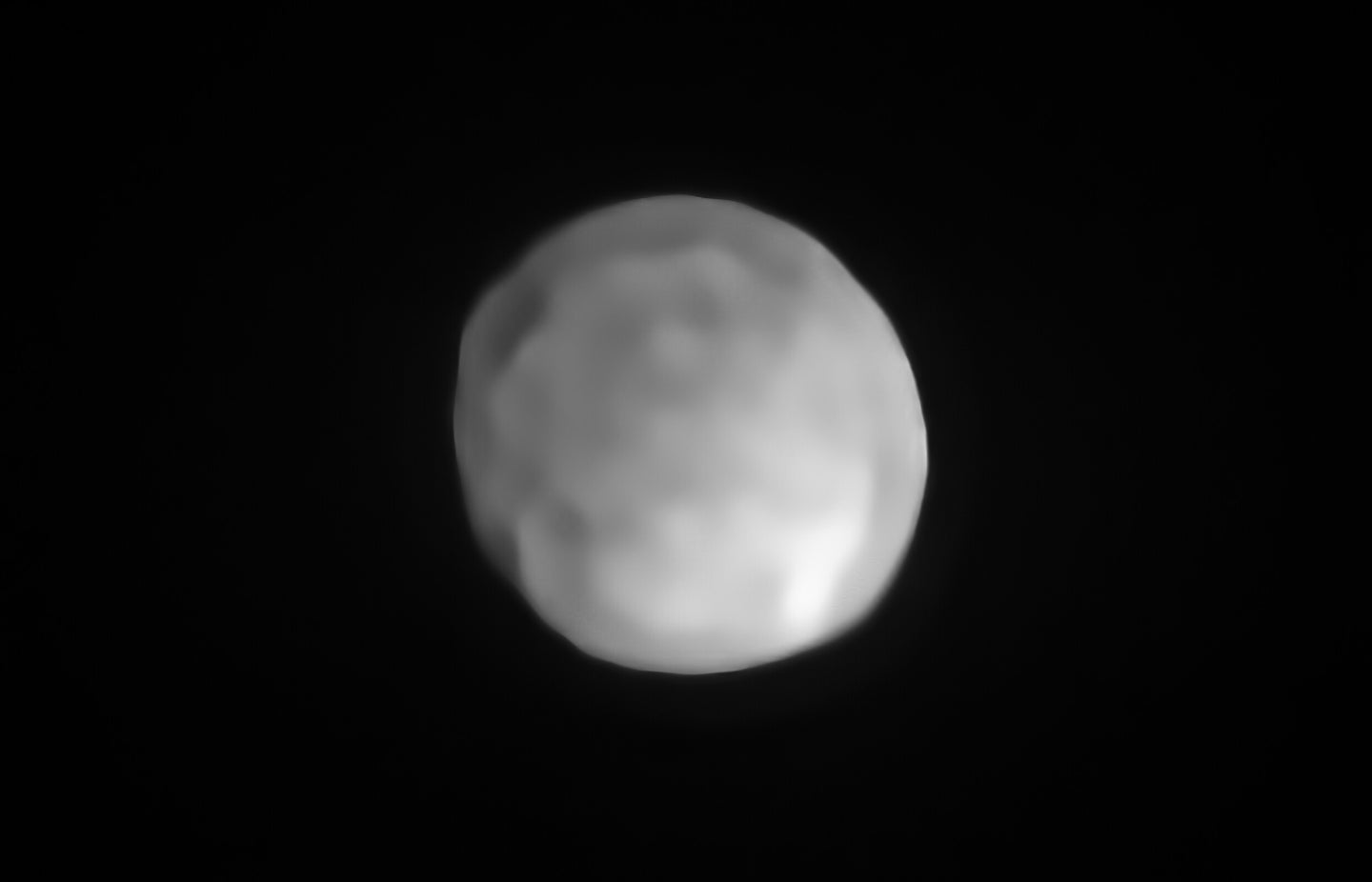 A new SPHERE/VLT image of Hygiea, which could be the Solar System’s smallest dwarf planet yet. As an object in the main asteroid belt, Hygiea satisfies right away three of the four requirements to be classified as a dwarf planet: it orbits around the Sun, it is not a moon and, unlike a planet, it has not cleared the neighbourhood around its orbit. The final requirement is that it have enough mass that its own gravity pulls it into a roughly spherical shape. This is what VLT observations have now revealed about Hygiea.
SHARE

Two billion years ago, somewhere out past Mars, a small world ended. Then, after picking up its pieces, a new world was born. Astronomers call that new world Hygiea, and they just caught their first direct glimpse of it and its catastrophic history.

Until now, Hygiea (named after the Greek god of health and hygiene) was just one of millions of asteroids in the asteroid belt, the pre-planetary wreckage that fills the solar system between Mars and Jupiter. But advances in astronomy have brought the body into focus for the first time, revealing a smooth, round form at odds with its cratered, misshapen companions. The new observation, published Monday in Nature Astronomy, suggests that Hygiea hides a cataclysmic past, one that could gain it admission into the exclusive but poorly understood club of dwarf planets—potentially re-shaping the club itself in the process.

Asteroids have historically been too small to see clearly from Earth, but with the introduction of adaptive optics—a technology that cancels the atmosphere’s blurring effect for crisp Hubble-like photos—astronomers have spent years using the Very Large Telescope in Chile to work their way through the largest, brightest asteroids. At about 270 miles wide, Hygiea ranks fourth largest in the belt, after Ceres, Vesta, and Pallas. While Ceres is heavy enough for gravity to draw it into a sphere during formation (classifying it as a dwarf planet), Vesta and Pallas aren’t, so the punier Hygiea’s rotundness puzzled researchers. “When we started analyzing the data, we were kind of surprised to see how spherical this asteroid is,” says Franck Marchis, a coauthor and planetary astronomer at the SETI institute.

Instead, the researchers hypothesize that the shape represents a scar from a past trauma. According to their simulations, another asteroid roughly 50 miles across could have torn through the originally lumpy pre-Hygiea, basically liquifying it. Some pieces continue in similar orbits today, but gravity collected most of the remains and sculpted them into the smooth world astronomers are now seeing. The study emphasizes that objects in the asteroid belt are more than inert leftovers, that they, like planets, have their own unique stories. “Some have moons, some have been destroyed,” Marchis says. “These bodies are truly geological worlds.”

In keeping with Hygiea’s complex history, the team also points out that the object now satisfies the official criteria to join Eris (about 1440 miles across), Pluto, Makemake, Haumea, and Ceres (about 600 miles across) as the sixth and smallest dwarf planet: it orbits the sun, is not a moon, is part of an entourage of similar objects, and—crucially—has enough heft for gravity to make it round.

The team has plans to submit Hygiea to the International Astronomical Union (IAU)—the organization that names and classifies objects and features in space—for consideration, but the road to official dwarf planethood is long and uncertain. Most astronomers agree that Sedna, Quaoar, and Orcus (Pluto-like planetoids orbiting beyond Neptune) also fit the definition, and their candidacy was discussed during an IAU symposium in 2009, yet a decade later their status remains in limbo. Caltech astronomer Mike Brown, who has discovered many planetoids, also maintains a database of hundreds more possible dwarf planets.

Receiving a dwarf planet classification wouldn’t change how scientists view Hygiea, but it could affect the public perception of the object’s significance, not to mention textbooks and encyclopedias. More than a decade after Pluto’s astronomical demotion, for instance, the topic still inspires strong feelings on both sides.

One reason for the candidate pileup is bureaucratic. The IAU has two working groups for naming objects, one for planets and moons, and another for “small bodies” below a certain brightness. Both work together to name dwarf planets, but dimmer objects like Sedna or Hygiea fall exclusively under the purview of the small bodies group, which doesn’t try to draw a line between small bodies and dwarf planets, according to group member Keith Noll. This process ends up adding a soft requirement that a body be at minimum 550 miles wide for both groups to consider it, and for it to have a chance at dwarf planethood.

Another reason is scientific. The dwarf planet category remains poorly defined because the community has so few examples to go on. Hygiea, for instance, probably didn’t have the mass to become round while forming, but only did so after being destroyed. Whether that counts as planetary enough for the IAU remains an open question, but researchers can learn a lot from such categorical edge cases regardless. “This is going to be very much an object that helps us probe the transition zone for how impacts affect an object,” says Michele Bannister, a planetary astronomer at the University of Canterbury in New Zealand.

And Hygiea is likely just the first of an upcoming batch of dwarf planet examples. As a new generation of astronomical equipment (such as the Extremely Large Telescope) switches on over the next decade, astronomers should be able to move beyond the asteroid belt and resolve the shapes of even the dim objects beyond Neptune. Researchers have been able to infer a lot about the icy bodies from indirect observations, but seeing is believing, and more detailed surface maps similar to Hygiea’s will help researchers better sort the diversity of solar system objects into useful categories.

“That’s the way science works. It’s not a rigid law that we never change,” Marchis says. “The IAU may come back to a better definition of dwarf planet that will include Pluto, Quaoar, Eris, Hygiea, and so on, based on seeing those bodies and truly understanding what those bodies are about.”