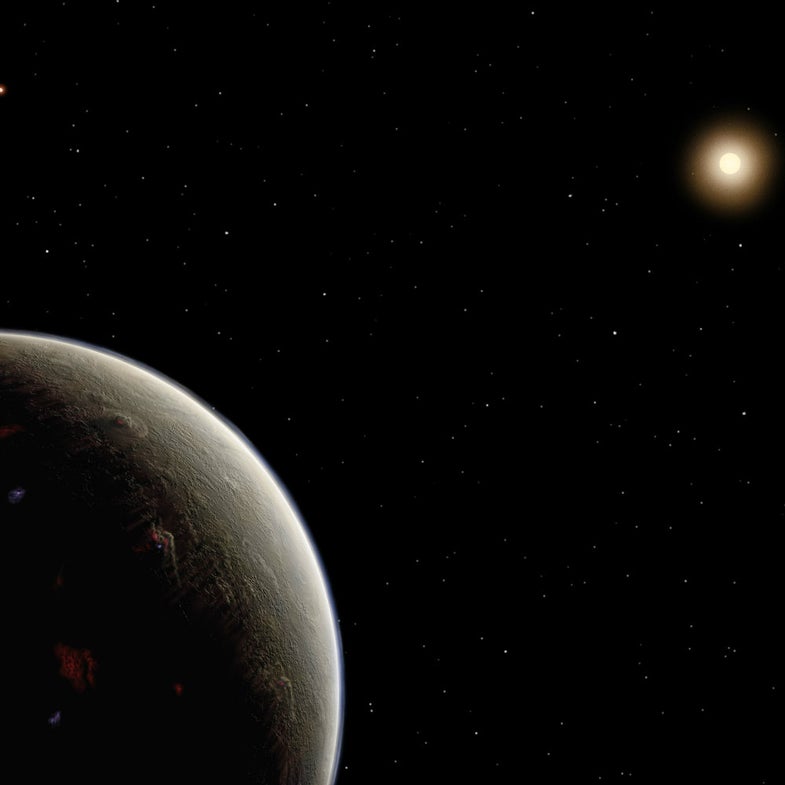 Astrophysicists just found a planet orbiting the star HD 26965, 16 light years away from Earth. Finding exoplanets is always fun, and the fact that this one is in the star’s habitable zone (where liquid water could exist on its surface) is a bonus. But that’s not why people are particularly psyched about the announcement.

See, HD 26965 also goes by 40 Eridani A—the star orbited by Spock’s homeworld in Star Trek. That means they found Vulcan. Ok, fine, they found a real-world analog to a completely fictional world, but you can’t blame Star Trek fans for being excited.

The star was first suggested as a possible candidate for Vulcan’s host in a 1968 collection of short stories by James Blish adapted from episodes of the iconic original series. It became canon decades later in a letter co-authored by Star Trek creator Gene Roddenberry published in Sky and Telescope in 1991 (see page five).

From the letter: “This year we celebrate the 25th anniversary of the launch of two important enterprises. One is the HK Project at Mount Wilson Observatory, where astronomers have been monitoring surface magnetic activity on EDO solar-type stars to understand our own Sun’s magnetic history. The other is the starship Enterprise on the television series “Star Trek.” Surprisingly, the two have more in common than their silver anniversaries.”

In 1966—at the same time Star Trek premiered—the HK project started looking at the light of distant stars, trying to get more information about how these flaming balls of charged gas worked. One of those stars was 40 Eridani A, a single star in a triple-star system.

They also looked at another star, Epsilon Eridani, which is frequently cited in science fiction as a distant alien homeworld. Thanks to a different, 1980 Star Trek book, Epsilon Eridani was also in contention to be Vulcan’s star. Here’s where it gets really fun: Citing the work of the HK Project, Roddenberry and three Harvard astrophysicists wrote in their Sky and Telescope letter that 40 Eridani A was the better candidate for Vulcan’s star since it was 4 billion years old (similar to Earth) while Epsilon Eridani was only 1 billion years old. A comparative infant, any planets around Epsilon Eridani wouldn’t have had time to evolve complex and advanced life forms.

We get it, you nerd. What about the actual science?

The data published in a paper in the Monthly Notices of the Royal Astronomical Society is just as cool as the sci-fi. To find this planet, the researchers looked for small changes in the star’s light that could indicate something was orbiting it.

Instead of looking for a dip in light as a planet moves between its star and a telescope (called a transit) these researchers watched the wavelengths of light coming off the star, looking for little shifts that would indicate how it’s moving relative to Earth. That gives them a general idea of how often the planet orbits its star, and how big it is.

“The new planet is a ‘super-Earth’ orbiting the star HD 26965, which is only 16 light years from Earth, making it the closest super-Earth orbiting another Sun-like star,” lead author Jian Ge said in a statement. “The planet is roughly twice the size of Earth and orbits its star with a 42-day period just inside the star’s optimal habitable zone.”

But a super-Earth isn’t necessarily Earth-like—the term refers to any planet with a mass higher than our home world’s but significantly less than the ice giants Uranus and Neptune. The researchers don’t yet know what kind of planet the real-life Vulcan is; it could be a big ol’ version of the rocky Earth, but it could also be a gaseous planet something like a pint-sized Neptune.

Without more data, we won’t know. But luckily we’re about to get more data. NASA’s TESS satellite will be looking toward that star later this year, and if the planet transits, we could get more information about its density or atmosphere.

If TESS does show that Vulcan is more like Earth than Neptune, that still doesn’t mean a bunch of green-blooded, pointy-eared aliens with an extremely advanced and logical society are hanging out on the surface. That’s incredibly unlikely. We’ll be lucky if there’s even microbial life for us to hunt down traces of. But we can still hope. Roddenberry was right about cell phones, tablets, and automatic sliding doors so clearly that means we’ve got 45 years left before we invent warp drive and make first contact. Make it so.