This pair of dancing stars will one day collide and explode

They could give us insight into the biggest kinds of explosions in the Universe. 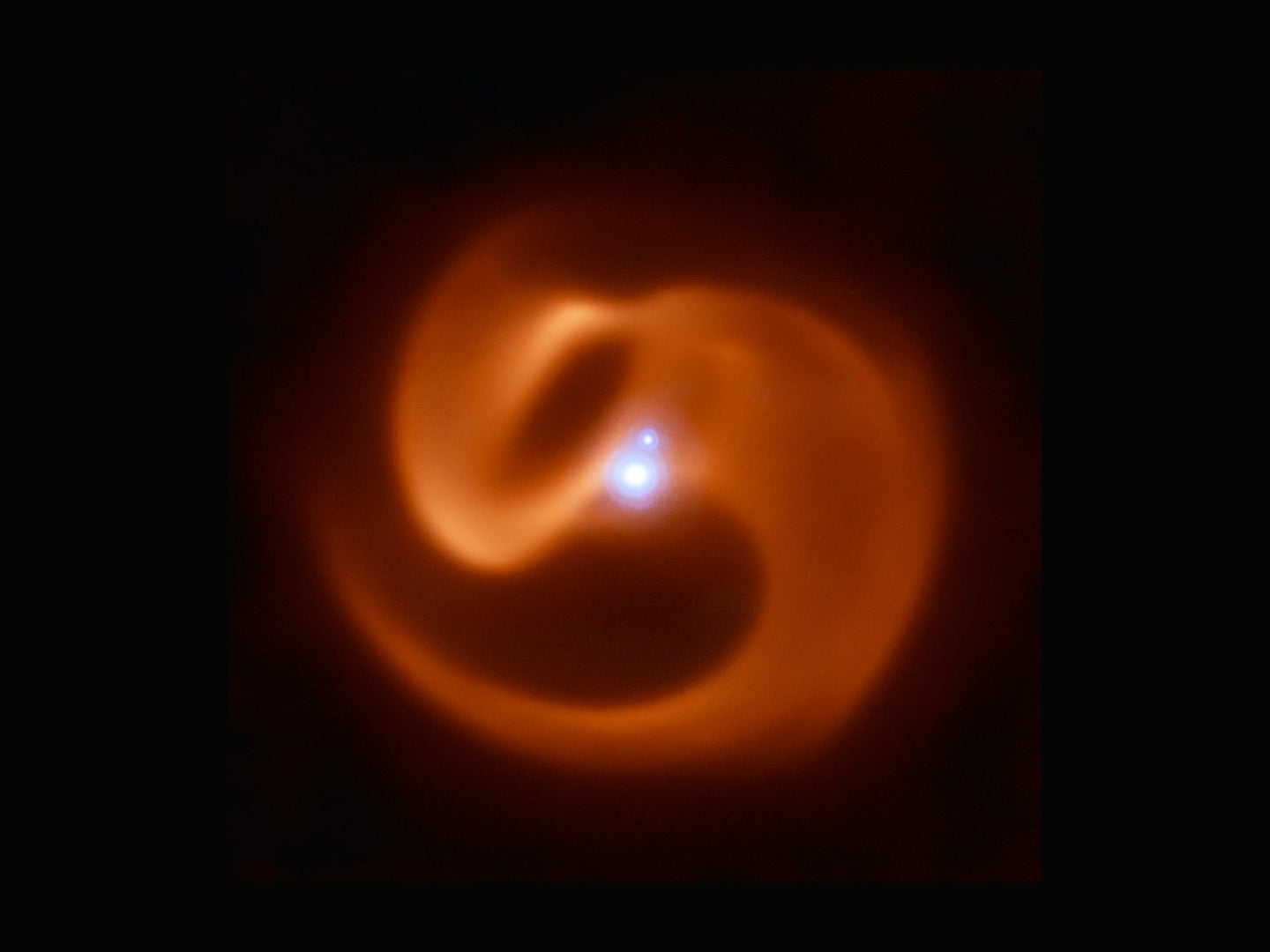 The star system is called "Apep" after the Egyptian god of chaos with the same name. European Southern Observatory
SHARE

About 8,000 light-years from Earth, two stars dance. One of them takes the lead and spins aggressively around the other, with so much energy that it sucks away matter from its partner, forcing it to reveal its core. But the stationary star is powerful, too, boasting enough power to strip down the outer layers of its orbiting partner. The naked pair of stars is what astronomers call a “wolf-rayet binary star system,” and their dance will continue until they collapse into one another. Last week, a team of researchers uncovered some of the pair’s most intricate secrets.

This could be the first sighting of a fast-spinning wolf-rayet star binary system, “an idea that’s been floating around for 30 years, but we have not necessarily seen one until now,” says Mathieu Renzo, a researcher at the Center for Computational Astrophysics of the Flatiron Institute in NYC, and who was not involved with the study.

Since its discovery in 2018, Apep, as researchers call this particular pair of wolf-rayet stars, has baffled astronomers. Not only is it a real oddity—we have only found a few hundred in our galaxy—but it has some extremely rare features. The pair of stars is so incredibly hot and bright, that when they spin, they create stellar winds that can go as fast as 1% of the speed of light. This stellar wind is responsible for stripping the stars to their cores, and in the process creates a halo of dust around the pair. This dust should expand at the same speed as the wind moving it—but when researchers at the University of Sydney found Apep, they noticed that its dust was moving at just a quarter of the wind speed. That shouldn’t be—the finding almost defied logic.

“The logic was absolutely convoluted,” says astronomer Yinuo Han, lead author of the paper. In the paper published in the Monthly Notices of the Royal Astronomical Society, the team proposes a mathematical model that explains the mismatches they saw in Apep’s images.

To craft this model, the team first had to analyze thousands of images taken over three years at the European Southern Observatory’s Very Large Telescope in Chile. “It’s not like we received a JPEG file. We receive the images in a very messy, almost obscure format,” Han explains. His first task was ‘cleaning up’ the images, removing all the light emitted by other stars and stellar bodies so they could see Apep more clearly.

Removing all that light noise allowed the team to take a detailed look at the two stars. They discovered that both stars are about 10 to 15 times more massive than the Sun and more than 100,000 times brighter. It takes them 125 years to complete a full orbit around each other, at a distance comparable to the size of our Solar System, according to a press release. This movement inspired the team, led by astronomer Peter Tuthill, to name the system after the Egyptian god of chaos, explains Han. “Apep [is represented] as a snake coiled up and sort of chasing the light in the middle,” he says. “[Apep] has to fight Ra, the Sun, and they chase each other every night.”

But more importantly, they were able to figure out that from Earth, we are looking at the central star “from above” so we see just one of its poles (like the Earth, stars have poles and equator). It was precisely that last bit of information that allowed them to develop a model that might explain the difference in speeds they were observing. They measured the wind speed coming out of the pole facing Earth, but the dust was coming out of the star’s equator. “It’s a very special star where the wind from the poles is much faster than the wind from the equator,” Han says.

How is this even possible? “When you have something moving very fast, you have the effect of centrifugal force on the spinning object,” explains Renzo. This force reshapes the star, making it flatter in the poles and rounder in the center—similar to a football—which makes the wind coming out of the star’s poles faster than the one pushing dust out of the equator. Since the two stars are dancing in a circular motion, the dust doesn’t expand in a straight line, but rather one that wraps into a spiral. “As the two stars orbit one another, this dust gets twisted and sculpted into a vast glowing sooty tail,” explained co-author Tuthill in a post about the discovery.

If the model is correct, the dance of Apep will end in the most intense explosion that we know of, a gamma ray burst. If the system was pointing towards the Earth, its future explosion could erase our planet’s ozone layer, exposing all living creatures to the Sun’s ultraviolet radiation. Thankfully, it’s pointed elsewhere; and having a fast spinning pair of wolf-rayet stars in our neighborhood will give us valuable information about the formation of other gamma-ray bursts, Han explains.

“The field of massive stars’ evolution and explosion is booming right now,” Renzo says. “But most [telescopes] look for systems that are very far away, outside of our galaxy, and so it’s difficult to have a lot of data. This system provides you with a very complex system very close, so you can have a lot of detail. It’s very important to push both these directions to understand better the life of stars.”