The dead star is enjoying its final meal. 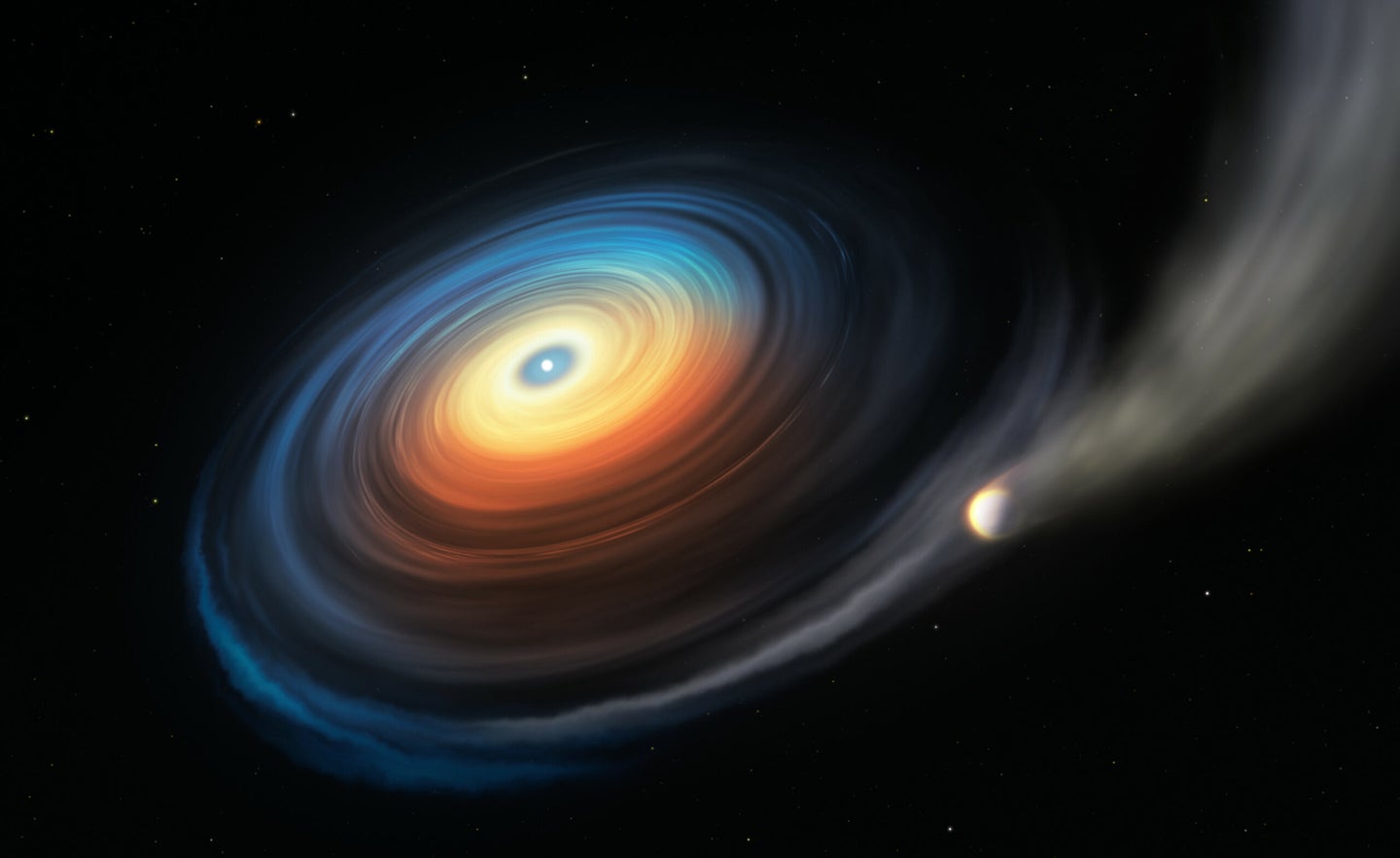 Someday, our sun will swell into a red giant and scorch everything in its path before collapsing into a white-hot dwarf star. In solar systems with stars like our own, this apocalypse tends to wipe out any inner planets. But whatever survives has a shot at enjoying a second act, astronomers recently confirmed.

White dwarf stars, burnt out cores light enough to avoid collapsing into neutron stars or black holes, pepper the Milky Way. At least some should host exoplanets, considering their previous lives as normal sun-like stars, but no one has ever detected a white dwarf solar system. But now, researchers think they may have found one through careful astronomical detective work. A puzzling chemical footprint many hundreds of lightyears away suggests the presence of a white dwarf that’s feeding on the atmosphere of a nearby planet.

“It’s such a unique composition that I think it has to be related to some type of planet,” says Boris Gänsicke, a physicist at the University of Warwick in the UK and co-author of the research, which recently appeared in Nature, “and because of its atmospheric material, it has to be a planet with a very large, very deep atmosphere.”

On top of proving that at least some planets out there have a post-red giant future, the first-ever detection of a white dwarf planetary system also showcases a new technique for investigating the atmospheres of exoplanets.

Amidst thousands of white dwarfs spotted by the Sloan Digital Sky Survey, this star—which sits 1500 to 2000 light years from Earth in the direction of the constellation Cancer—looked odd from the beginning. Like many others, this telescope can measure an object’s chemical makeup by studying the colors of light it emits. An excess of light from hydrogen suggested that it was sucking the gas from a companion star, but Gänsicke also noticed a hint of light shining from oxygen atoms—a rarity in stars.

To take a closer look, he and his team won four hours of prized observing time on the Very Large Telescope (VLT) in Chile, one of the world’s most powerful telescopes. Within the first half hour, he knew they were onto something big. VLT’s keen eye clearly picked out photons originating from both oxygen and sulfur atoms, something Gänsicke and his colleagues had never seen before. “It was exceptional,” he said. They could also tell that the star wasn’t naked, but sat clothed in a rotating disk of gas, which also contained hydrogen, oxygen, and sulfur.

The group first considered the usual suspects. Could the three out-of-place elements be streaming off a nearby star? Unlikely. A companion would tug the white dwarf back and forth, and it looked pretty steady. What about local asteroids, or wreckage from past Earth- or Mars-type planets? Such small rocky bodies are rich with calcium, magnesium, and iron, Gänsicke says, but the astronomers saw no sign of such minerals.

The dwarf’s bizarre light had the team stumped, until they started thinking about the ingredients that go into making big planets. Gänsicke’s big break came while skimming a textbook about our solar system’s chemistry. Dig deep into icy giants like Uranus and Neptune, he read, and you’ll find layers of water ice (hydrogen and oxygen) and hydrogen sulfide ice (hydrogen and sulfur). Suddenly, the white dwarf’s unusual elements made sense: They were coming from the disk of gas, which was boiling off a nearby Neptune analog.

While the team can’t measure the size, location, or mass of the planet directly, modeling suggests that the Neptune- to Jupiter-sized ice giant cuddles right up against the white dwarf, racing around it once every ten days. The star blasts the planet with violent ultraviolet light, which pulverizes the ice molecules in its atmosphere and blows them out into space. There, they stream behind the planet like the tail of a comet. The ultraviolet radiation pushes much of the tail out further into space, but some falls inward into the gas disk, and from there some atoms eventually spiral in onto the white dwarf itself.

As the star cools, it won’t irradiate the planet quite as hard, and eventually the stream of atoms will cease. Overall, the planet will lose perhaps a few percent of its total mass, the team estimates.

The final puzzle is how a Neptune-like planet found its way from the icy outer depths of the system into the balmy inner realm of the rocky planets, and how it escaped destruction during the star’s red giant rampage. “The most plausible thing,” Gänsicke says, “is that there is at least one additional planet in the system, maybe more.”

The group suspects that even bigger giants lurk far out. Sometime after this star became a white dwarf, a close encounter between the ice giant and one of these other planets must have sent it ricocheting inward toward the star.

Next, the group hopes to use the system to figure out exactly how Neptune-like the planet really is. Examining the atmospheres of exoplanets is a burgeoning field in astronomy, but because planets are dark, picking out specific atoms remains largely out of reach. The white dwarf and its gas disk shine directly with pilfered elements, however, making the makeup of this Neptune a bit more accessible.

Next year the Hubble Space Telescope will turn its mirror toward the system to observe the white dwarf in ultraviolet light, giving the team a good chance of spotting carbon and nitrogen. In addition to cosmic chemistry, Gänsicke also harbors hope of eventually catching a glimpse of the dynamics of the system itself, such as traces of the planet’s tail spiraling outward and away from the star. “That’s something that we will try to see if we can detect in future observations,” he says. “That would be awesome.”