Good news: these exoplanets probably have water. Bad news: AHHH SO MUCH WATER.

You can get too wet for life. 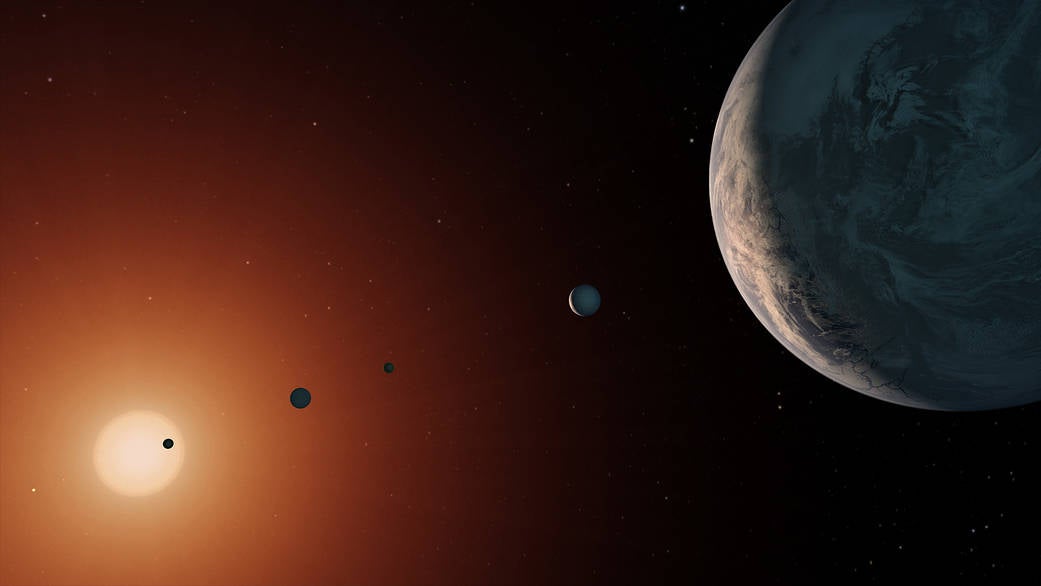 Last year, the world got a look at an incredible star system, TRAPPIST-1, which had seven intriguing planets orbiting it. In those initial glances researchers figured out that—optimistically—five could potentially have temperatures that allowed for liquid water on their surfaces, with three of the seven planets located in orbits within the star’s habitable zone.

This was particularly exciting because where there’s water, there might be life. Here on Earth, life thrives when we just add water. But a closer inspection of those wet worlds, published this week in Nature Astronomy says they might be so bloated with water as to snuff out any potential for life. And even if some organisms did manage to develop, the study suggests, the massive quantities of water might keep us from detecting them.

But after years of looking for signs of water on other worlds, how could there possibly be a place where there’s too much water for life? Let’s take a look.

Earth seems like a pretty wet place. We drink our recommended eight cups of water a day, and our bodies are about 60 percent water by volume. Heck, water covers about 71 percent of this planet’s surface. That’s a pretty wet world, right?

Not compared to most of the planets at TRAPPIST-1. Though it might seem like Earth is awash in water, dihydrogen monoxide makes up just 0.02 percent of our planet’s mass. 0.02 percent. The rest of it is rocks and metals and organic matter and everything else on this world. In contrast, some of the planets around TRAPPIST-1 could have water that accounts for 15 percent of their mass. Or even more.

The data used by the authors of the Nature Astronomy paper suggest that in a few cases some of the world might be 50 percent water by mass, though later observations, published last month, put those estimates much lower, at around 10-15 or as low as 5 percent. Either way, that’s still tons of water. Two hundred fifty times the water in Earth’s oceans, in fact.

“We’re quibbling over lots and lots of water, or lots of water,” jokes Cayman Unterborn, a geoscientist and lead author of the paper.

Researchers can make those estimates even from 39 light years away by observing planets as they pass in front of their star. They can get a general idea of a planet’s size, but also its density, which tells us a lot about what it’s made of. These were about the size of Earth, but much, much lighter. Not so light that their weight could be attributed to some gaseous atmosphere, but not solid as a rock, either. That leaves water, and presents a world of new questions for planetary scientists.

A world with all that water would look really different from Earth, and even from the watery moons of Enceladus and Europa, which are vastly smaller than the planets of TRAPPIST-1.

On a truly water-rich planet, like the ones we’re talking about, there might be a thin outer layer of liquid water. But as you descended further into the planet, the pressure of the oceans above would grow greater, compressing the liquid water into solid, high-pressure forms of ice. That ice essentially acts as those planet’s mantle, surrounding some sort of core of even more solid material.

The dynamics of a world like that are alien to us.

On Earth, paleobiologists look to dynamic places on our fragile crust to find that first evidence of life, places where molten rock wells up to form hot spots at the bottom of cold oceans, or sends gasses from the deep interior out into the atmosphere. But on a world where the interior is solid, could life even develop?

“A really critical aspect of having an active planet is having it melt,” says Unterborn. “With enough water you’ll effectively shut off melting entirely, because the pressure is so high you’ll never get hot enough to do it. Yes, there is water on the surface—it is a habitable planet by the minimum definition—but you’re shutting off a lot of the geology. A lot of the communication between the surface and the interior is gone, and we think that’s necessary to be a habitable planet over geologic time scales.”

The low estimates for the planets in question are about 250 times as much water as is found in the Earth’s oceans, spread across planets the size of Earth. It would only take about a fifth of that amount to completely cover all of the land on our world.

Without dry land, the ability of water to weather stones down into their constituent parts is more limited. That means fewer raw materials produced by weathering, like phosphorous, the backbone of DNA. With that raw material limited, there’s less of a chance for life to develop in large enough numbers to produce a signal—like increased oxygen in the atmosphere—that would be detectable from Earth.

With our current understanding of how life develops, it’s hard to imagine a scenario for its evolution on those super-watery worlds. And even if life had a shot, we probably wouldn’t be able to spot it.

But that doesn’t mean these planets are a dead end. Part of the reason the water worlds are so interesting to researchers is that accumulating lots of water (or lots and lots of water) is a complicated planetary process. The focus of this paper wasn’t really life, but how the planets got to be where they are. The high water content means they probably did not form in the positions that we see them today.

Planets start out as protoplanetary disks of gas and dust circling around host stars. Close to the star it’s hotter, so water stays vaporized. Water particles farther out become ice, which can slowly accumulate onto nascent planets. The line between these two is the ice line, (referred to in the paper as the ‘primordial snow line’ during the system’s early days), which shifts throughout a star’s lifetime as it dims.

In our solar system, planets close to the sun tend to be dry, while planets farther away are more water-rich. In the TRAPPIST-1 system, even planets closer to the sun have high concentrations of water. That means the planets probably had to migrate to their current positions over time, something that astrophysicists are still trying to explore.

Steven Desch, a co-author of the paper, says that one way this migration could occur is for planets to interact with gas within that protoplanetary disk. “The planets lose angular momentum making waves in the gas disk, and slow down and spiral in to the star,” Desch says. “That also provides a way to keep the orbits circular. Other mechanisms wouldn’t leave the system as orderly as we infer the Trappist-1 system to be.”

Their observations indicate that migration could have been substantial if the planets formed early on in the star’s 8 billion year history, or the planets could only have moved a small amount if they formed slowly over time, as the ice line moved closer to the star.

We still have a lot to learn about the development of other worlds, and looking at planets beyond our own small system can give us ever more interesting looks into the growth of the universe. But it’s going to take a lot of us to get the whole picture.

“I like to stress the interdisciplinary nature of exoplanets especially,” Unterborn says. “It’s not just astronomy—they’re really good at discovering them—but its the geology and chemistry that’s going to help contextualize everything. There’s a whole field that knows a lot about rocks. We should talk.”