This pitch-black exoplanet is spiraling toward its doom 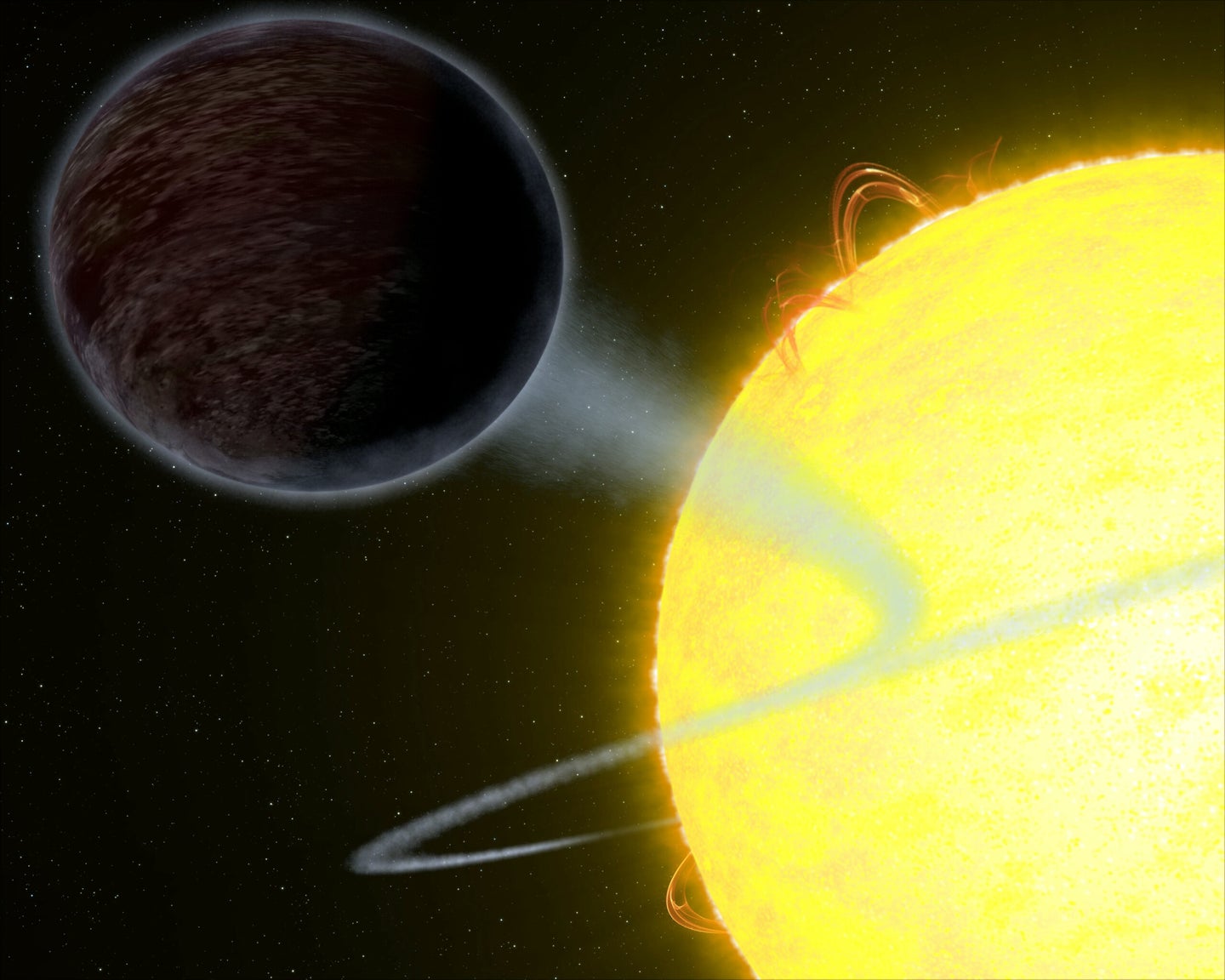 WASP-12b is hot, black, and spiraling toward a violent end.
SHARE

Somewhere in the constellation Auriga, a world is ending. Fortunately, WASP-12b is an inhospitable planet, so all casualties will be limited to gaseous explosions of apocalyptic proportion. Despite possessing twice the waistline of Jupiter and half again its heft, this giant exoplanet lives so close to its star that it whizzes around once each (Earth) day. It also appears darker than fresh asphalt, trapping almost all of the light that falls on it as heat.

Being this hot, swift, and dark comes with a downside: Under such conditions, the atmosphere burns so intensely that it can’t quite keep itself together. “The planet is so hot that the outermost layers are pumped up,” says Samuel Yee, an astrophysicist at Princeton University. Eventually parts of the planet’s atmosphere expand so far from its core that they fall into its hungry host star. In 2010, researchers gave the planet just ten million years left to live.

But according to new research, WASP-12b may not even have that long. As it wastes away to nothing, a separate gravitational effect also drags the world toward its star, which will rip the planet apart in perhaps 3 million years, Yee and his colleagues argue in their latest paper. Astronomers have long suspected that such planets, appropriately known as “hot Jupiters,” should be especially prone to this fate, but WASP-12b’s death spiral is the first to confirm it.

Researchers discovered WASP-12b in 2008, as its passage in front of its star dimmed the host’s light, causing a daily flicker. Follow-up observations also revealed that the planet’s heat makes it glow, letting astronomers tell when it disappeared behind the star as well.

After years of scrutiny from multiple teams, astronomers noticed that the star wasn’t flickering with perfect regularity. Rather, the sun started to dim earlier and earlier. Researchers initially wondered if a second, unseen planet was mucking with WASP-12b’s orbit, but after further observations the community settled on two possibilities: either the planet traced out an oval path, and the tips of that oval were also advancing slowly around the sun, or the planet was getting closer to its star, and its orbits were getting shorter.

The new research, which appeared in The Astrophysical Journal Letters, settles this debate. The researchers report new data from ten transits (which happen when the planet passes in front of the star) and four “occultations” (when it slips behind). If WASP12-b’s orbital oval were turning, the timing of the planet’s disappearances would evolve differently from those of its transits, because a planet’s speed changes more in an elliptical orbit. By combining their new data with a historical catalog of around 160 transits and occultations, Yee says, the team showed that both events are happening earlier and earlier—a nearly sure sign that the planet’s path shrinks with each new orbit.

The observations suggest that each Earth year, the planet orbits the star about 30 milliseconds faster. Over the course of this past decade, those imperceptible accelerations have accumulated, shifting the onset of WASP-12b’s transits by more than seven minutes overall, Yee says. He and his colleagues predict that in the next three to three and a half million years (a blip in the billion-year lifetime of the system), the planet will dive so close to its star that the increased intensity of gravitational forces will tear it apart.

WASP-12b’s impending demise marks a first for exoplanet astronomy and presents a rare opportunity to peer inside a star by studying its tides.

This alien planet is falling toward its star for the same reason that our moon is moving away from Earth. As the moon gravitationally stretches our planet, it raises the oceans around the equator, creating a tidal bulge. The Earth spins faster than the moon does, so this swell sits a bit ahead of the moon. All objects attract each other gravitationally, and the additional bulk from the higher oceans act as a carrot in front of the moon, spinning it faster and pushing it into a higher orbit. Because of this effect, the moon moves an inch or two further out into space each year.

The WASP-12b is big enough and close enough to its star to act as the moon does to Earth, raising a tide in the stellar material itself (tides stretch the entire planet, land and sea, into a slight, football-like shape. The shift is only noticeable to us in the oceans, though). The star spins much slower than the planet though, so the tidal tango plays out in reverse. The star’s bulge lags behind WASP-12b, slowing its rotation and dragging it inwards into a lower orbit.

While the Earth’s bulging depends on how its oceans rub against the ocean floor, the exact structure of tides on WASP-12b’s yellow dwarf star remains mysterious. “In the star there’s no ocean or surface, so what’s actually going on,” Yee asks.

Some sort of stellar waves must be brokering the transfer of energy from the planet to the star, he says, so measuring WASP-12b’s spiral more precisely will help researchers get a handle on the internal structure of its host star. The planet’s current three-million-year prognosis is already about 10 times shorter than simple calculations predict, indicating that the star may be running out of fuel and entering the final stages of its life.

In the bigger picture, Yee and his colleagues wonder whether tidally induced spirals have killed off other exoplanets. Research from last year has shown that stars hosting hot Jupiters tend to be young, perhaps because older stars have already destroyed their planetary companions. Other researchers speculate that the abundance of heavy elements in some stars could mark the final resting places of dead planets, Yee says. Only further observations of other close orbiting giants will help scientists better understand their fates.

“This is just one particular planet around one particular star,” Yee says, “but as we get more examples we can understand if this is a weird situation or if most [hot Jupiters] end up like this.”