Some exoplanets tilt too much, and it’s pushing everyone apart

Orbits are getting a bit less mysterious. 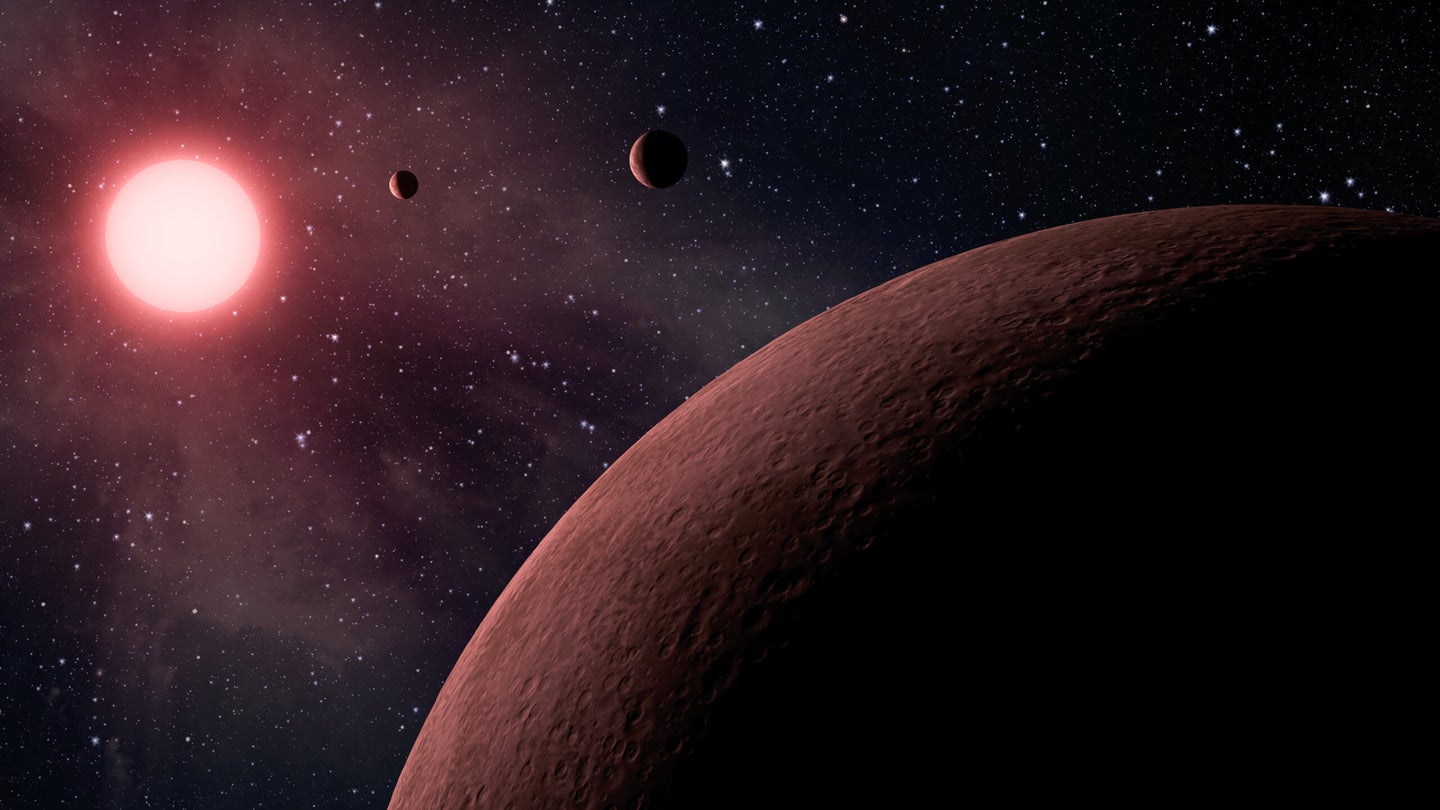 An artist's impression of exoplanets orbiting a star. NASA/JPL-Caltech
SHARE

The explosion of exoplanet discoveries in the last decade has boosted our hopes of finding another world like Earth somewhere in the galaxy. But it’s also contributed to a new awareness of strange peculiarities in star systems beyond our own—where planets exhibit bizarre alignments and eccentric configurations without any good explanation. The proclivity for pairs of exoplanets to seemingly push themselves into orbits that are more irregular from one another than they ought to be, for example, has confounded astronomers for almost a decade.

Finally, it looks like we have some answers as to why this happens, and what it means for finding habitable worlds. New findings published in Nature Astronomy suggest that these exoplanet pairs often exhibit poles that are very sharply tilted, promoting an “obliquity” (the relationship between a planet’s axis and its orbit) that pushes the planets apart. Planets could experience extreme seasonal changes and harsh climates as a result, affecting their ability to sustain environments habitable to life of some kind.

From what we currently know about the orbital mechanics of planets around stars, we expect to see certain configurations. Planets and moons often fall into what are called orbital resonances, where they pass each other at the same points as they go on their separate orbits. Certainly not all planets and moons behave this way, but resonances happen more often than not. It’s not just a coincidental phenomenon—it’s physics.

But since we began discovering more and more exoplanets, astronomers have noticed that many planetary pairs in other star systems have orbital periods that defy resonances, falling into orbits that are much farther apart than expected. And none of the suspected reasons—like the gravitational effects of asteroids or excess cosmic gas—have ever stuck.

Still, we’ve always had a few clues to work with. It was already known from prior research (including observations of Jupiter’s moons and the infamously-tilted Uranus) that orbits between two bodies could be pried apart if there was enough energy being dissipated. If the planet had a close orbit to its star, then the star could raise more extreme tides on the planet, which would then be efficient at converting orbital energy into heat energy. The dissipation of that heat energy might then be enough to actually shift the planet’s orbit.

But a close orbit in itself wouldn’t explain what astronomers were seeing in many of these exoplanetary systems. Something else was contributing to the extreme tidal dissipation that could shift entire worlds. And as it turned out, that factor could very well be large axial tilts. Young planets with fresh new orbits in concentrated regions may be forced to maintain high obliquities, and in turn this causes orbits to shift much more radically than predicted. In pairs of planets, the orbits would move farther away from resonance patterns.

“Obliquities create strong tides, and tides move, or ‘sculpt,’ orbits,” says Sarah Millholland, an astronomer at Yale University and the lead author of the new study. “Up until now, the typical assumption was that close-in exoplanets have zero axial tilt. Our study suggests otherwise.”

The study is only pitching a theory, and there haven’t been any direct measurements of exoplanet axial tilts to bolster this hypothesis. But this is still probably the best explanation for what has been a decade-long mystery in the astronomy community, and the effects are nothing to scoff at. The entire endeavor of exoplanet research moves forward on the hope of finding a habitable world, and the new findings affirm the importance that certain astrophysical mechanics have when it comes to that search. These obliquities wouldn’t just disturb climates and weather patterns, but they might also result in excess heat deposition in the planet. That could make the difference between potentially cozy Earths from searing and suffocating Venuses.

“Virtually all of the planets Kepler discovered are completely uninhabitable,” says Yale astronomer Gregory Laughlin, a coauthor of the new paper. “This includes the planet pairs that we think have at least one member with high obliquity. What we find interesting going forward, however, is that many potentially habitable planets orbiting low-mass stars might be subject to the obliquity mechanism that we’ve explored.” Most notably, this includes the notorious seven-planet TRAPPIST-1 system, in which three worlds reside in the habitable zone and five in total exhibit varying potentials for possessing liquid surface water.

Laughlin emphasizes that while it’s clear having a high obliquity will have tangible impacts on a planet’s climate, it’s still a matter of debate as to how large obliquities will impact a planet’s habitability as a whole. Earth’s 23.5 degree tilt obviously doesn’t pose a problem here, but that might be sharp enough to cause disturbing effects in a star system just dozens of light-years away.

There will need to be plenty of follow-up work to actually confirm what’s happening, and it starts with actually observing and characterizing exoplanet obliquities. But without a study like this, obliquities would still be under the radar for most astronomers. “We used a theory that had been applied to somewhat obscure special cases in our own solar system, and showed that it can work beautifully in the extrasolar context,” says Laughlin.