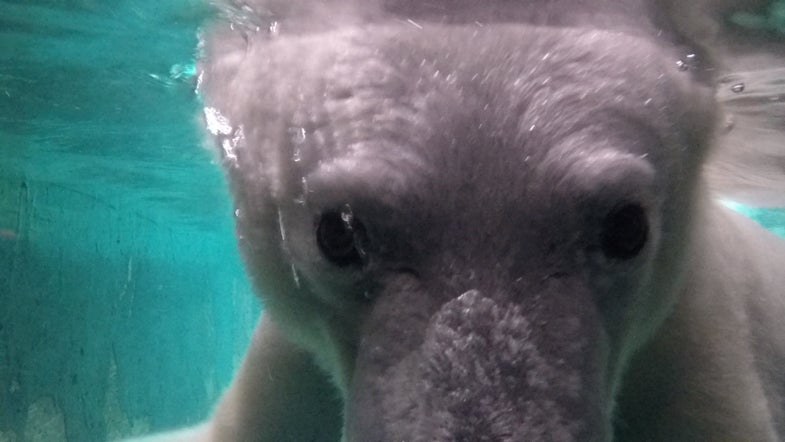 Nora the polar bear swims in for her close-up. Oregon Zoo
SHARE

The endlessly patient creators of the bear treadmill are bringing you another animal research invention: the polar bear swim chamber.

Ice in the Arctic continues to melt earlier, freeze later, and cover less area than ever before. That means polar bears find themselves traveling much longer distances by land—and sea—to find their food.

Anthony Pagano, a wildlife biologist with the U.S. Geological Survey’s Changing Arctic Ecosystems research project, is working to calculate the energetic cost of all that movement. In April 2017, Pagano and collaborators put polar bears on treadmills and found the bears don’t have to work quite as hard when moving on land as previously thought.

But the everyday exercise machine was just the start. In November, Pagano and his collaborators at the Oregon Zoo published a study where they looked at how much energy a polar bear uses when swimming in the journal Marine Mammal Science. They found swimming is more energy intensive than walking for these massive, seal-eating mammals—a worrisome fact in an increasingly ice-free world.

To figure this out, Pagano and his Oregon Zoo colleagues built a “swim chamber” out of a small rectangular room that originally housed a wave machine for the polar bear exhibit. They removed the underwater metal grate at one end and installed a small motor used to create endless pools that humans love to use at hotels on the other. They also capped the chamber with a metal and plexiglass cover to make the room relatively airtight, to allow researchers to track how the air changed as the bear swam and breathed. With this setup, the bear could swim in through the underwater entrance and start swimming in the water treadmill while the researchers sat above the plexiglass and monitored the oxygen content of the air to see how many calories a bear burned.

Amy Cutting, an animal manager at the Oregon Zoo, and her colleagues then spent about a year teaching a young female polar bear named Nora to voluntarily enter and spend time in the swim chamber. It wasn’t too difficult to get Nora to love the room, says Cutting, because the two-year-old bear used the space as a playpen, dragging her toys in with her and throwing them around. 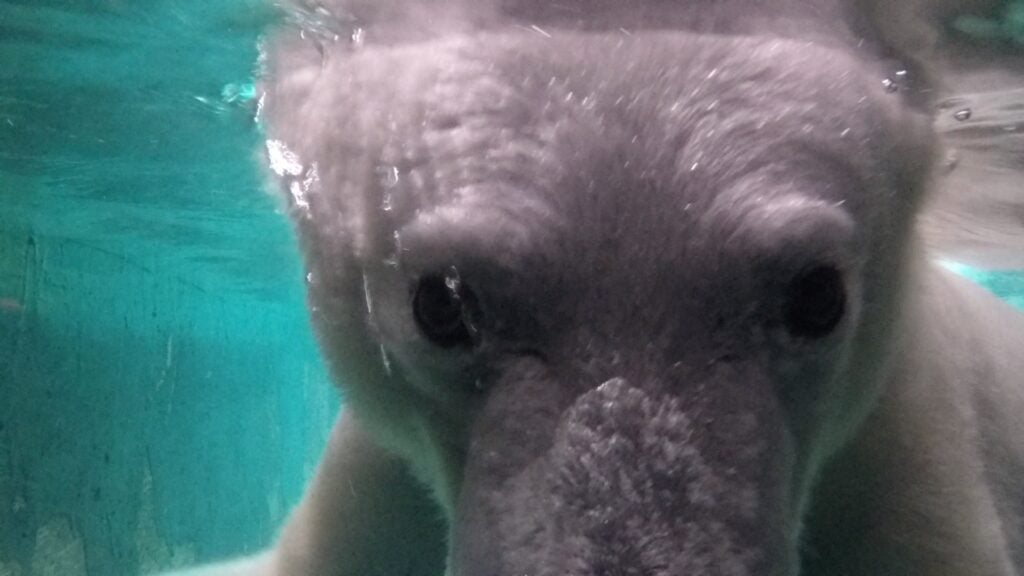 Nora the polar bear swims in for her close-up.

When Nora was ready, Cutting and Pagano started the experiment in earnest. During each swim session, they had her enter the chamber and took initial measurements of the oxygen content of the air while the swim current was turned off, and she rested on the side. Then, they turned the engine on and measured the oxygen content while she swam and dove for motivational fish for at least 10 minutes at a time.

By watching video footage of the swim later, they determined how quickly she paddled at a given moment. By comparing stroke rate to the amount of oxygen in the swim chamber at that time, Pagano could estimate energy used per stroke. Nora is a playful bear and wouldn’t just swim straight, diving when it pleased her, which made it difficult to directly calculate the relationship between speed and calories burned. But he did find a polar bear swim stroke was, on average, 1.5 times metabolically costlier than a stride on the treadmill.

This wasn’t a big surprise for Pagano, but it was troubling. Polar bears are semi-aquatic mammals that rely on the ocean for survival, but their bodies aren’t exactly built for underwater efficiency. The further the bears have to travel across the Arctic to find their high fat, seal diet, the more calories they will burn along the way. This puts polar bear reproduction, and the health of the adult polar bears themselves, into question.

The Oregon Zoo is currently redoing its polar bear exhibit, and when it’s finished, Pagano and Cutting hope to use the lessons learned with Nora to measure bears swimming at different speeds. Getting a more detailed look at how bears swim and walk in captivity will hopefully give researchers insights into the risks and lives of polar bears trying to survive in wild landscape that continues to change around them. Whether Pagano needs a new contraption (polar bear elliptical, anybody?) to do this research remains to be seen.