Why some places flood while others stay dry 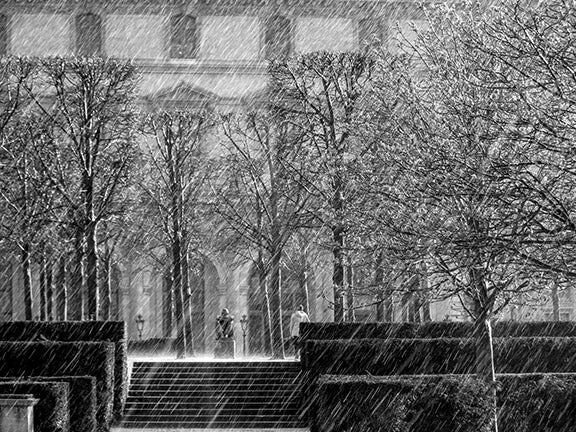 According to climate models, as the Earth warms due to climate change some parts of the globe will get more rain—a lot more—than others.

“If you look at a global map of model projected changes and precipitation, we see that the models in some regions produce a strong increase,” says Stephan Pfahl, an atmospheric scientist at the Institute for Atmospheric and Climate Science in Zurich Switzerland. “In other regions, they produce hardly any change, and some oceanic regions even show a decrease in extreme precipitation.”

While this has been understood for a while, scientists haven’t been sure why. Our basic understanding of the main driver of extreme precipitation—the kind of rain and storms that caused catastrophic flooding in South Carolina in 2015 and southeastern Canada this month—has focused mainly on the changes associated with the extra moisture in the atmosphere. The atmosphere will be more moist in the future, because warmer air carries more water.

“But just based on this moisture content, one would not expect this spatial variability,” says Pfahl.

In other words, that explains an increase in precipitation—but not why some areas will flood and others will stay dry.

In a study released today in the journal Nature Climate Change, Pfahl and his colleagues attempt to create a clearer picture of these coming changes, to allow researchers to better refine regional climate models. The ultimate goal is for communities to have a better sense of how climate change will affect them so they can attempt to adapt accordingly. While those projections exist, their results come with a lot of uncertainty. Pfahl’s study helps deconstruct existing global climate models to understand what factors are contributing to the projections we already have, so that the models can be improved moving forward.

If studying the model data to get a better understanding of how the climate works sounds backwards—like an aeronautical engineer designing a plane and then taking it apart to understand how it flies—you might not quite understand how climate models work. Climate models are mathematical representations of the interactions between the atmosphere, oceans, land surface, ice, and the sun. We input most of what we know about how the Earth works (and basic physics, chemistry etc.) and test them against recorded climate data to show their accuracy. A 2016 study in the journal Ocean Science found that climate models correctly predicted the ocean warming within three percent of the recorded measurements from 1970-2005.

Because climate models tap into trends that we might fail to notice in the swarm of available datasets that make up the real world, they sometimes create projections or results that seem odd. That’s why, as this study and others illustrate, researchers sometimes have to go looking for explanations of unusual results.

“We looked at the output from a lot of climate simulations,” says Pfahl. “These models can produce changes in extreme precipitation for different reasons. If the moisture content in the atmosphere changes, then this will lead to a change in extreme precipitation.” No surprise there. But the researchers found that changes in vertical wind speeds lead to projected precipitation changes as well. You can think of horizontal winds as layers of a cake. The winds may move from left to right, or even within a circular fashion, but they still stay within those cake layers. Vertical winds, by contrast, move up and down, crashing through those cake layers.

Formalizing the relationship between moisture content, vertical winds, and precipitation, Pfahl was able to look at the influence of those factors separately and calculate how extreme precipitation would change if the vertical winds stayed the same, for example, and only the moisture content of the atmosphere changed. Doing this enabled Pfahl to realize that the vertical winds seem to cause the spatial differences in extreme rain events—his modeled data matches that of the present-day climate.

While Pfahl’s study focused on global climate models, if the results are confirmed by other researchers and incorporated into the next generation of climate models, they could hopefully improve regional predictions as well. Scientists could use vertical wind speeds in specific regions to predict just how much rain their respective moisture increases would yield.

“We can be more confident in these models if we really understand the physics behind the projections,” says Pfahl. “And in this case, our study contributes to this confidence.”