What it takes to find food in the rapidly melting Arctic. 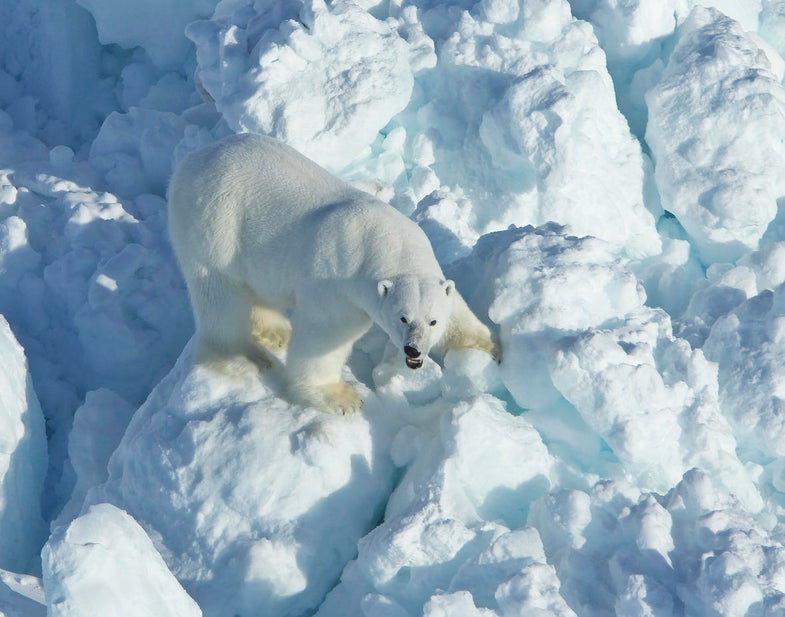 You probably won’t see this at your local gym. Researchers used furry Fitbit technology to find out how much energy bears use up while walking.

Tatqiq seemed unsure about the treadmill. After all, the 580-pound polar bear had never even seen such an apparatus, let alone walked on one.

The first time it moved, Tatqiq just stood there and watched herself slide backwards. Nate Wagner, senior zookeeper at the San Diego Zoo, tried enticing her with a dead fish. Tatqiq took a tentative step forward, and then another—she couldn’t resist a fish-flavored bribe. Those first few steps marked the start of a five-month training process teaching Tatqiq to walk on a treadmill not for exercise, but for science.

In a recent study published in the Journal of Experimental Biology, biologists put bears on treadmills to determine how much energy it costs them to walk. Polar bear habitats in the Arctic are rapidly diminishing due to climate change, and the study data could help predict how much stamina these animals need to find food and survive as sea ice continues to disappear. And so Wagner, co-author of the study, trained Tatqiq to walk on a treadmill.

“It isn’t as complicated as it might sound,” says Wagner. “The training unfolded quite quickly. Tatqiq is a very inquisitive and smart bear—she was ready to come into this new, strange object.”

The object was pretty strange. A human treadmill probably looks like a band-aid to a polar bear, so researchers used a horse treadmill. They built a 10-foot-long chamber made of shatterproof plastic and reinforced steel around the machine, and keepers rewarded bears with meat and fish through a small, circular opening in the front. The whole contraption weighed 4,400 pounds.

The experience was a novel one for Wagner, too. He mostly trained bears to get comfortable with medical exams and tolerate routine injections to avoid putting the animals under anesthesia. But with a moving object like a treadmill, he had to be careful; if it moved too slowly, Tatqiq would get bored and try to sit down. But if the treadmill moved too fast, it would skew the data—which has been a problem in the past.

Anthony Pagano, lead author of the study and wildlife biologist with the U.S. Geological Survey Alaska Science Center, says similar research conducted almost 50 years ago found polar bears spend three times as much energy walking as other carnivorous mammals. But the speed in that treadmill experiment—3.4 miles per hour—was much faster than the polar bear pace previous studies had documented in the wild (just 2.1 miles per hour).

To compare, Pagano also assessed the walking speeds of another polar bear at the Oregon Zoo, and seven grizzly bears from Washington State University. Using an accelerometer (the same technology found in your trusty Fitbit tracker) Pagano concluded the price of walking was not much different for a polar bear than other land-dwelling meateaters.

For those of us with a heartbreaking image in our head of an exhausted polar bear laboriously lumbering across the sea ice in search of food, this might seem like good news. Polar bears might not have to work three times as hard to walk as previously thought. But as Arctic habitats continue to melt away, these creatures have to travel farther and farther in search of increasingly scarce food sources.

“These increases in walking they’re likely having to perform because of declines in sea ice means it’s certainly going to cost a lot of energy, regardless of whether they’re similar to other mammals,” he says.

Another of Pagano’s studies published earlier this year in the journal Science discovered the metabolic rate of a polar bear is 50 percent higher than previously thought. Bears in the study burned almost 12,500 calories a day, and even when food was inaccessible, their metabolisms didn’t slow.

Ringed seals rich in fat provide the bulk of that caloric intake for polar bears. And they’re difficult to catch even before climate change factors in. Bears will stake out a seal’s breathing hole for hours—sometimes days—waiting for their blubbery breakfast to surface for air. Because of the immense weight of a polar bear, they travel across the ice like giant, furry starfish, spreading their legs far apart to help distribute their hundreds of pounds.

The ice is tricky enough to navigate, but without it, bears have to swim for miles in the icy, open water searching for food.

The distribution of sea ice in the Arctic is the second lowest seen in 39 years (2017 marking the lowest), according to the National Snow & Ice Data Center. Polar bears have been endangered for years—some populations, like bears of the south Beaufort Sea, have dropped by 40 percent—and scientists issued a warning earlier this year that if temperatures continue to climb at such a high rate, these majestic creatures will be extinct by 2100.

Some like Tatqiq, who arrived at the San Diego at two-months-old after her mother died in the wild, would never have survived in the Arctic, anyway. But by putting her paws forward, researchers hope they can help conserve relatives of Tatqiq’s who may one day be lost forever.