New research on the teeth of lions who've hunted humans 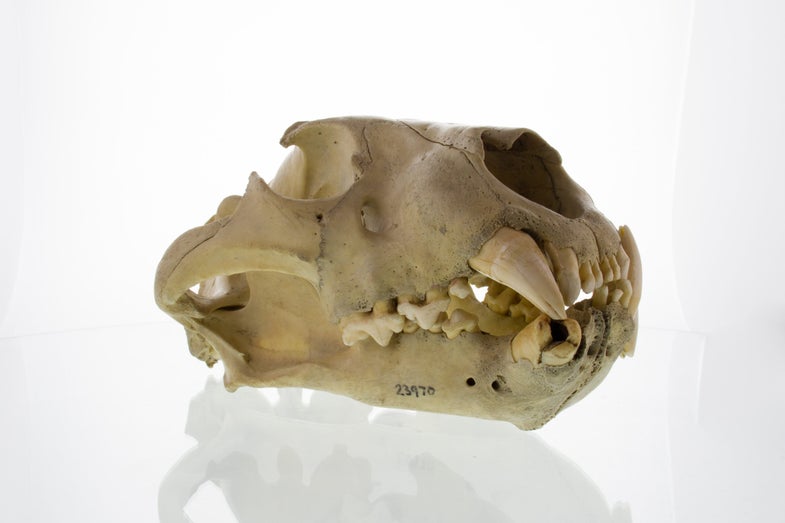 In 1898, a British effort to build a railroad bridge across a ravine in Tsavo, Kenya ground to a halt when a pair of lions started picking off workers one by one and eating them.

Understandably, the workers who had not (yet) been eaten were not happy about this. Neither was the British military, who oversaw the construction project. Lieutenant Colonel John Patterson eventually shot and killed the two lions, ensuring that he would always be a hit at dinner parties. “Oh, Bertie, you shot a fox? Good for you, dear chap. Did I ever tell you about the time I shot two man-eating lions?”

Patterson also made some money on the tale, writing a vivid book about the experience, including hearing the lions eating a person outside his tent, crunching the bones, and purring in a reportedly terrifying manner. He also sold the lions’ remains to The Field Museum in Chicago, where they were stuffed, put on display and have been studied intensely ever since.

Now, in a paper published Wednesday in Scientific Reports, biologists have found evidence that suggests that Patterson might have been exaggerating just a tiny bit. Previous research showed that the man-eating lions probably killed 35 people instead of the 130-something victims that Patterson claimed to have avenged. But now, researchers are also calling into question the bone-crunching that Patterson reported thanks to a new way of looking at microscopic scratches on teeth.

“It’s hard to fathom the motivations of animals that lived over a hundred years ago, but scientific specimens allow us to do just that,” Bruce Patterson (no relation to John), said in a statement. “Since The Field Museum preserves these lions’ remains, we can study them using techniques that would have been unimaginable a hundred years ago.”

Bruce Patterson, a co-author on the new paper, is the MacArthur Curator of Mammals at The Field Museum and has studied the lions for years. Back in 2000, he found damage to the lions’ teeth that suggested that they couldn’t go after their normal food sources, like gazelles, which require a lot of jaw power to take down. The lions’ toothaches might have prompted them to turn their attention to the next tasty morsel on the menu: humans.

But were these lions so hard-up for food that they ate the humans nose-to-tail? Probably not, according to scratches on their teeth.

Paleontologist Larisa DeSantis usually studies the fossilized teeth of long-extinct saber tooth cats, American lions, and direwolves, looking at fine scratches on their teeth to figure out what kinds of food they ate right before they died.

She also looks at the teeth of modern animals, scanning the surface to see how a diet of flesh vs a diet of flesh and bones translates onto the microwear of pearly whites. DeSantis scans the teeth (or casts of the teeth) at 100 times magnification, and runs the scans through a program that figures out if the scratches in the enamel are all going the same way, or if they’re more random, with pitting and scarring on the tooth.

In her scans, hyenas—who chow down on bones—have teeth more heavily pitted and scarred (on a microscopic level) than cheetahs, which tend to leave the bones of their prey behind. Modern lions, DeSantis says, tend to fall somewhere in between these two.

But the man-eating lions she studied—including a man-eater from Mfuwe, Zambia that killed six people in 1991—had teeth that were far more like captive lions, who are fed softer, prepared meats, than anything else. Far from eating bones, their teeth showed that the man-eaters stuck to the softer stuff, like human flesh.

It’s hard to parse a lion’s motivations, but it looks like these lions weren’t desperately hungry—if they had been, they’d probably have finished the scraps of their meal. Instead, they were simply taking advantage of a plentiful prey source: us.

“Humans became an easy solution to their problem. Humans have not been a typical prey item for lions,” DeSantis says, pausing. “We’re not atypical either.”

The Tsavo and Mfuwe lions aren’t the only human-eating lions out there. Between 1990 and 2004, 563 people were killed in by lions in Tanzania. And as climate change and growing human populations force humans and lions closer together, there’s no reason to think that lions won’t take advantage of the situation.

“As prey abundances are on the decline, people are increasing in numbers,” DeSantis says.

DeSantis says that analyzing historical specimens like the Tsavo and Mfuwe lions could help researchers analyze how dietary preferences in predators have changed over time, and what influence human activities might have had on those preferences.

But that means preserving specimens in museum collections is increasingly important. Even if modern analytics can’t tease information out of a specimen, there’s no telling what the future might hold.

“These are techniques that weren’t possible when the specimens were sold to The Field Museum 100 years ago,” DeSantis says.