Lots of calls from the second-largest whale in the world 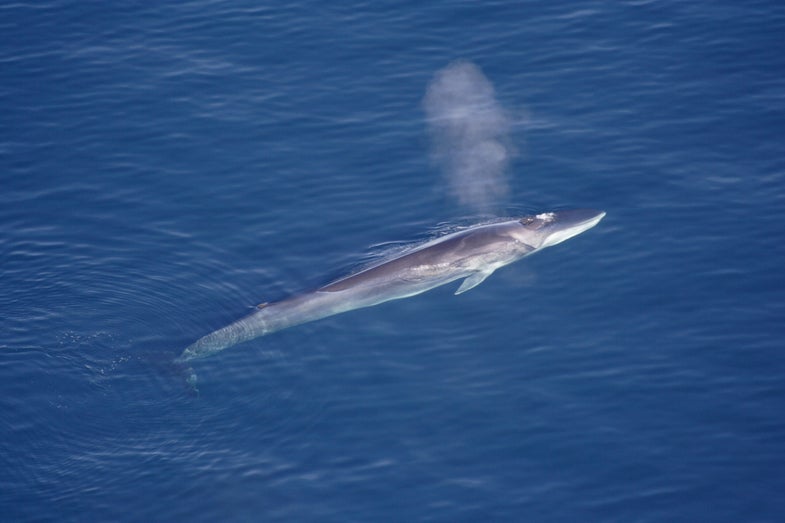 A new high-tech acoustic buoy off the coast of Long Island has recorded its first whale calls, only days after being placed in the Atlantic Ocean. All songs were from the Fin Whale, the second-largest whale in the world. Aqqa Rosing-Asvid / Wikimedia Commons
SHARE

On July 4th a momentous song was recorded that was so low in pitch that researchers at the Woods Hole Oceanographic Institution in Cape Cod, Massachusetts had to speed up the track to listen.

It was the song of the fin whale, captured by a high-tech buoy 22 miles south of New York’s Fire Island. Then, again the buoy captured songs two days later, and now, at the end of July, there have been a total of eleven days of song, though the recording device was only placed in the ocean at the end of June.

It’s the work of the Wildlife Conservation Society‘s New York Aquarium and the Woods Hole team. The researchers plan to learn more about these gentle giants, along with the surrounding ecosystem in the New York blight, from Cape May, New Jersey to Montauk, New York. They specifically want to look into the sounds of the sea, monitoring our cetacean friends and the environment in which they live.

“By detecting whales in this area, we will get a much better understanding of how they are using the waters off New York and how to better protect them,” said Howard Rosenbaum, Director of WCS’s Ocean Giants Program and co-lead on this project, in a press release.

Fin whales, the only species to be heard so far, are common in the waters surrounding New York City, but they are endangered due to a long history of whaling, with an estimated 1,500 off of the east coast. They can grow to 70 feet long (calves can be 20 feet at birth), and they are the only mammal to have an asymmetrical color pattern, where their left jaw is black, while their right jawline is white.

The Woods Hole Oceanographic Institution is making the data readily accessible online, without the actual records to listen to. So for your listening pleasure, hear this fin whale call, below.