Why Was This Bear Chewing On A Kayak? 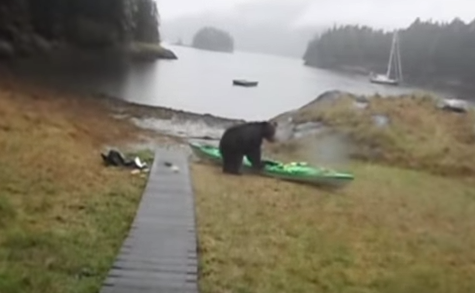 When in bear country, don’t leave your kayak lying around for bears to tamper with. The logic seems simple enough, but Mary Maley, a woman who posted a YouTube video of a bear eating her kayak, must have missed the memo.

According to her caption for the video, which she posted on Tuesday, Maley was on a 107-mile solo kayak trip and passing through a cabin owned by the U.S. Forest Service on Berg Bay in Southeast Alaska when she encountered a black bear gnawing on her boat.

At the beginning of the video, the bear is approaching Maley, and as it gets close, Maley yells “go away!” and lets out a short burst of pepper spray. The spray successfully deters the creature, but Maley seems unprepared for what happens next — the bear turns around and transfers its attention to the untended kayak instead. At that point, Maley changes her entreaty, asking the bear to leave the kayak and come back to her.

As the video proceeds, Maley’s imploring grows desperate. “What am I going to do,” she laments, then screams for the bear to stop over and over. When that doesn’t work, she tries a rational approach with the bear, exclaiming, “It doesn’t even taste good, it’s just plastic.” At one point, she yells at the bear, “It’s the end of September, why are you here? You’re supposed to be asleep.”

Since the video’s release, many YouTube commenters have criticized Maley for the way she handled the situation. We were also curious. So we reached out to a few bear experts to see what Maley should have done.

The experts’ first point of consensus is that Maley probably shouldn’t have been surprised to see a bear rummaging around her kayak — they are notoriously curious animals. “Bears ask questions with their teeth and claws,” says Tom Smith, a wildlife scientist at Brigham Young University in Utah, “and when they get done with the Q&A session, there’s not a lot left.”

It’s not unusual to see a bear chomping specifically on something like a kayak either, according to Douglas Clark, an environmental studies professor at the University of Saskatchewan in Canada. Bears like exploring things that are oily or made of plastic, says Clark, and the kayak’s foam seat was probably a big attractant. “When you’ve got a kayak seat, you’ve got sweat, body odors, all kinds of things,” he says. “It didn’t surprise me at all to see the bear chewing on it.”

But while Maley probably invited trouble by leaving her kayak unprotected, bear experts do agree that she was correct to pepper spray the bear. “She did exactly the right thing,” says Clark, who is more concerned with what happened in the first 15 seconds of the video than anything that happened afterwards. “What the bear was doing to the kayak really isn’t the most interesting thing that’s going on here,” he says. “This is actually a really good video for illustrating offensive aggression.”

Offensive aggression, according to Clark, refers to when a bear proactively approaches a person, whether in search of food that person may have, or treating that person as prey (it’s extremely rare, but it does happen, says Clark). His guess is that Maley’s bear knew that there was food around the cabin, and came up to investigate. “It’s coming in and approaching her directly,” he says. “It looks like a bear that knows it can get food.”

In her video caption, Maley indeed said she had been lunching when the bear approached. The bear’s audacity seems to indicate that it was familiar with humans, according to David Garshelis, a bear researcher with the Minnesota Department of Natural Resources. “It is unusual that a bear would be that unafraid of a person,” he says.

As for Maley’s point that the bear should have been asleep, Ryan Scott, the Alaska Department of Fish and Game’s regional wildlife supervisor for Southeast Alaska, says it’s not out of the ordinary that the bear was there. “Certainly there are bears through Southeast Alaska that have already denned up, but I never would think that they’d all be denned up by September 30,” he says.

In fact, this time of year would be a particularly ravenous time for bears, according to Heiko Jansen, a professor at Washington State University’s College of Veterinary Medicine. “It’s well-established that their appetites this time of year are just peaking, as they’re trying to put on as much body fat as they can to get into hibernation.”

For those who were concerned about the welfare of the bear after getting pepper sprayed, Clark says not to worry — he himself has been sprayed twice while training to become a park warden. “It feels like someone put needles in your eye sockets and threw you across the room,” he says, “but there’s no lasting damage.”

Ultimately, though, experts agree that Maley should have employed some intimidation tactics after she sprayed the bear, rather than simply standing there and asking the bear to leave. “She was just sort of whining,” says Garshelis. “She should have walked down that walkway right to where the bear was and yelled at it and sprayed it from there. I’m sure she could have chased it out.”

“It’s like standing there and yelling at a seagull for crapping on you,” Smith says. “I don’t know what language bears speak, but I don’t think it’s English.”

On her YouTube post, Maley wrote that she swam out to an anchored sailboat shortly after the bear left and got a ride to a nearby city to repair her boat.