This ancient predator stalked the seas with can-opener shaped claws 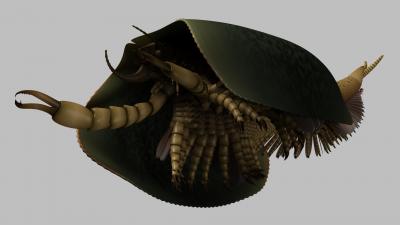 508 million years ago, long before some brilliant mind came up with the idea of cramming food into metal cans, a creature was cruising the ocean floor with claws like can openers.

At least, that’s what the claw shape resembled to researchers who described the fossil this week in a paper in Nature.

To be clear, this critter would not have had much success in opening cans, even if they were rolling around on the seafloor with the newly identified fossil Tokummia katalepsis.

“We think they might have been too fragile to be handling shelly animals, and might have been better adapted to the capture of sizable soft prey items, perhaps hiding away in mud,” study author Cédric Aria said of the claws in a statement. “Once torn apart by the spiny limb bases under the trunk, the mandibles would have served as a revolutionary tool to cut the flesh into small, easily digestible pieces.”

It’s considered a large predator for the time period when it was alive, as life was just beginning to explode with diversity here on Earth. Researchers think it occasionally swam, but probably spent more time walking around the seafloor, kind of like a lobster.

Tokummia is of interest to researchers because it is among the earliest evidence of the evolution of mandibulates, a group of arthropods that numbers in the millions of species today, encompassing crayfish to houseflies.

Mandibulates’ distinguishing characteristics are their distinctive jaws, or mandibles. In this case, Tokummia’s mandibles are described as broad and serrated. But like a lot of mandibulates today, the animal also had pincers (the aforementioned can-openers) to grab onto food.

But those aren’t the only odd features of this animal. It also has over 50 segments to its body, and was covered with a Darth-Vader-meets-Handmaid’s-Tale carapace, or protective shell-like covering.

Tokummia had small segmented structures on the end of its legs, a feature that is still seen on crustacean larvae today. The well-preserved fossils, collected in 2014, helped researchers fit these creatures into the broader evolutionary picture.

“In spite of their colossal diversity today, the origin of mandibulates had largely remained a mystery,” Aria said. “Before now we’ve had only sparse hints at what the first arthropods with mandibles could have looked like, and no idea of what could have been the other key characteristics that triggered the unrivaled diversification of that group.”