Officials want to find out who did it 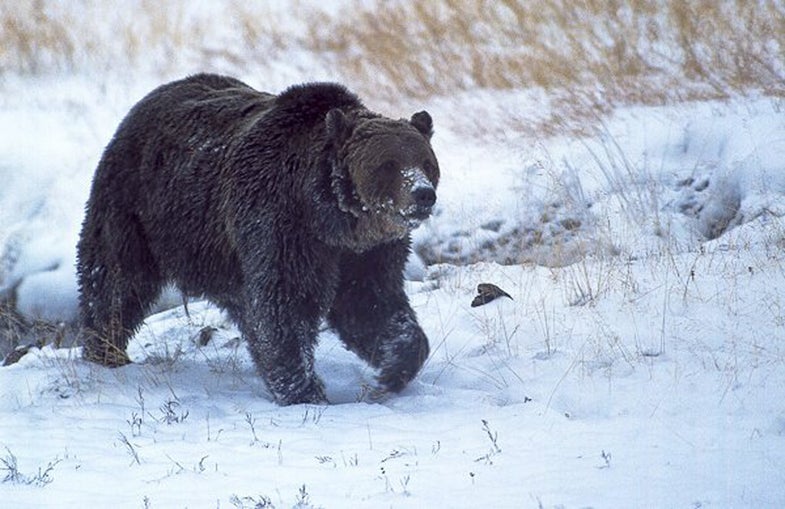 In this October 2005 photo a well-known Yellowstone National Park grizzly bear known as Scarface is shown in his prime. Scientists say the 25-year-old bear has been captured 17 times as part of a long-running study on the region???s grizzly bears. Scientists say the Greater Yellowstone Ecosystem grizzly bear population during his life has grown from about 300 to more than 750. Scientists say it could be time to remove federal protections for the bears, and that will be one of the topics at an Interagency Grizzly Bear subcommittee meeting Nov. 3-4, 2015, in Jackson, Wyoming. (Courtesy of Ray Paunovich via AP) FX801 (Ray Paunovich / The Associated Press). Ray Paunovich
SHARE

Scarface is dead. Not the ruthless drug kingpin of pop culture fame, but the beloved grizzly of Yellowstone, who was a favorite among parkgoers. The aged bruin—he was 25 years old—was illegally shot by a poacher just outside the park boundary near Gardiner, Montana late last year. Grizzly bears are protected under the Endangered Species Act (ESA) and are off limits to hunting.

Montana Fish, Wildlife and Parks confirmed recently in a release that the dead bear was indeed Bear No. 211, as he was known by researchers and park officials. No. 211 was famous among tourists and photographers, who gave him his nickname because of the gnarly scars and floppy right ear he had accrued over his decades of scraps with other male grizzlies over mates and elk carcasses.

His life was also heavily documented by park officials who captured and collared him repeatedly 17 times throughout the years. At his peak, he tipped the scale at a hulking 600 pounds, but had slimmed to about half that in recent times, weighing 338 pounds in 2015. The Montana Fish, Wildlife, and Parks department attributes this to his advanced age, noting that only 5 percent of male bears in the Greater Yellowstone Ecosystem survive to age 25.

U.S. Fish and Wildlife officials have already started an investigation to find out who Scarface’s killer is. Grizzly bears are listed as “threatened” under the ESA. The punishment for killing a threatened species is stiff—up to a $25,000 fine and six months in prison. Killing an animal listed as “endangered” is even worse,, with perpetrators facing a $50,000 fine and a year in prison.

An outpouring of grief has already flooded the web. Scarface’s death is sure to fan the flames of an already contentious debate over whether grizzlies should be removed from the Endangered Species List. The U.S. Fish and Wildlife Service proposed the species be removed this year. In 1976, when the bears were placed on the list, their population numbered 136. There are now over 700 bears in the park. Removing grizzlies from the list could open them up to hunting, a major fear among those who wish to keep them protected.

The proposal is currently still open for public comment.

Correction: this story originally incorrectly characterized the person who shot the grizzly in this case as a “hunter,” when in fact, they were a poacher. We’ve since updated the story and regret the error.