Do Skunks Hate The Smell Of Their Own Spray?

Short answer: Not as much as humans do 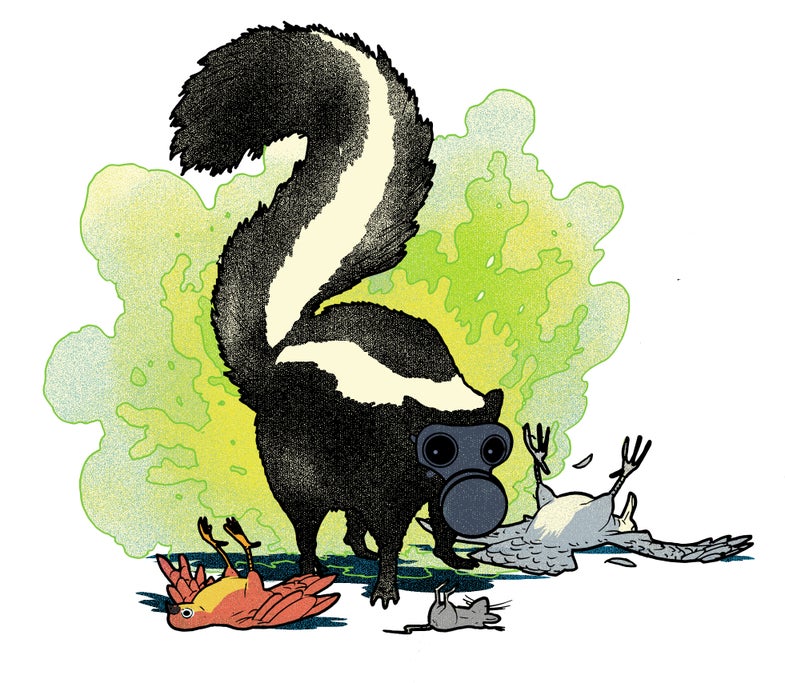 While no one has polled skunks on the topic, experts have made some keen observations … from a distance.

“When a skunk gets sprayed in the face, it will react much like a dog does,” says Jerry Dragoo, a biology professor at the University of New Mexico, who heads up what he calls the Dragoo Institute for the Betterment of Skunks and Skunk Reputations. “It will rub its face along the ground, trying to wipe it off. I suspect the skunk is coping with the burning sensation of high-concentration liquid in its eyes and the mucous membranes of its nose.”

As for the odor itself, the story might be different. Skunks do have sensitive noses—they probe their environment by sniffing the air and rely on olfaction for finding food. But Dragoo suspects they’ve grown accustomed to the smell of their own spray, so it doesn’t bother them the way it bothers other species. “I’ve seen them in covered traps after they have sprayed, and they appeared to have no reaction,” Dragoo says.

The most offensive component of skunk spray is a sulfur compound called thiol. It’s similar to the chemical added to natural and propane gases to give them a distinctive “danger” odor. “Our noses happen to be very sensitive to that,” says William Wood, Ph.D., professor emeritus in the Chemistry Department at Humboldt State University in Arcata, California, who has studied the chemistry of skunk secretions. But prolonged or repeated exposure to even the stinkiest compounds can lead to olfactory fatigue, Wood says. High concentrations of the compounds can keep the olfactory receptors in the nose from resetting so that the odor is no longer detected.

“Even I have experienced olfactory fatigue with skunk spray,” says Wood. “I smell it once and then cannot detect the odor for minutes to hours. I assume it is the same with skunks.”

Animals
Ask Us Anything
Wildlife