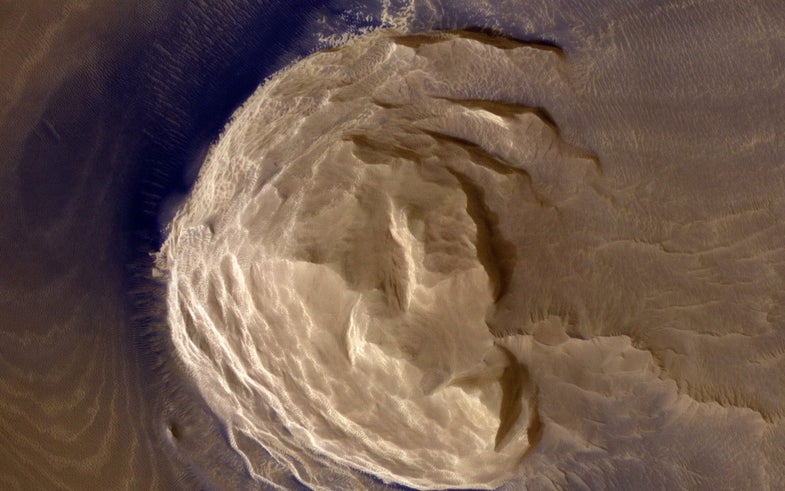 Most images we see of Mars make its landscape look flat and vast, but it’s actually home to some of the largest mountains in the entire solar system. And while the planet is pretty inactive, it was once very active. Mars has winds and dunes that form distinct features on its surface similar to what we see here on Earth, and a new study suggests that Mars might have a lot more in common with Earth than we thought.

Meteorites fall through our skies constantly, landing all over the world. Occasionally little pieces of Mars survive the entry through our atmosphere and are discovered—mostly in the Saharan desert and Antarctica—where researchers collect them for future study. A new paper released today in Nature Communications says that these Martian meteorites could be formed from the same volcanic processes that create volcanoes in Hawaii.

The islands’ fiery mountains are created by what is called a “hot spot,” or when material from the earth’s mantle comes up toward the surface and creates melting. A good example of this is the very active Kilauea volcano. But when these “hot spot” volcanoes get heavier and heavier from the constant creation and hardening of material, they can actually create an entirely different sort of volcano. They become so heavy with rock that they physically bend and warp the massive oceanic plate below Hawaii. As that bending takes place, much like a see-saw, the area surrounding the larger, heavier volcanoes gets flexed and uplifted—creating new, potentially eruptive peaks.

“If you go to Oahu or some of the older islands you find this volcanism that occurred a long time after the original volcanism. A good example of that is Diamond head crater,” says geologist James Day, study lead at the Scripps Institution of Oceanography at the University of California San Diego.

The Diamond Head crater on Oahu formed as a result of tectonic stress from older, more massive volcanoes. “This matches exactly what we see in the martian meteorites,” says Day.

Enter Mars: Scientists know of two types of Martian meteorites called shergottites and nakhlites, and while they sound like they are on the same superhero team, they are very different in age and chemical composition. And despite having collected over 200 Martian meteorites, scientists still have no idea where they come from on Mars. While they do know they are volcanic in origin, if you’ve ever seen a geological map of Mars, you know the planet is littered with volcanoes.

But the new research could provide a big clue. Day and his team analyzed 40 Martian meteorites for their chemical composition and found that they shared some similarities to one another—not unlike the way that volcanic rocks here on Earth are related. The nakhlites have a unique composition that doesn’t really fit most volcanoes we find on earth, while the shergottites look similar to the leavings of volcanoes like Kilauea that form over a hot spot. This is what Day thinks might have happened on Mars. And Olympus Mons—the largest volcano in the solar system, rising several times higher than Mt. Everest—is certainly up to the task. Other regions of Mars host smaller, lesser known volcanoes similar to Diamondhead. Day suggests that just like what we see around Hawaii, weight from large volcanoes like Olympus Mons has bent and flexed an entire region of Mars upward—creating the smaller mountains, which is where nakhlites might come from.

“What’s remarkable about these two similar styles of lava or volcanoes is that they both require a source that’s already been melted before,” says Day. “What is happening at Diamondhead is that the plate is getting bent and squeezed and squished, and a little more of that enriched material can get pushed out—and that is what we see with the nahkalites from Mars.”

Kayla Iacovino, a postdoctoral researcher in experimental petrology at Arizona State University, says what’s cool about the study is its ability to explain all Martian volcanoes, both big and small. “Their model seems to fit our geochemical observations of Martian volcanism [from meteorite samples], and it does not require a strange, otherworldly explanation for how or why volcanoes form on Mars.”

Dr. Paul Byrne, assistant professor of planetary geology at North Carolina State University says, “We’ve long known that the gigantic volcanoes on Mars are bigger, older versions of the Hawaiian shield volcanoes. This study takes an interesting approach by combining what we know of the chemical makeup of Martian meteorites with large-scale geophysical processes like the flexing of these large plates.”

Understanding the volcanic processes that once happened on Mars is not only important for completing the Martian history books, but it can help determine habitability as well. “If you don’t have volcanism on Earth then you don’t have some of the necessary gases in the atmosphere to keep our biosphere alive,” says Day. The nakhlites we have found on Earth are water-rich, which means that water is needed to help the melting take place. This could suggest that the volcanoes on Mars are linked to the hydrological cycle.

“If we see this process happening on Earth, could it be similar to volcanism on other planets? The answer, based on Martian meteorites, is yes,” says Day. Now he and his colleagues have to wait for more satellite observations of these volcanic regions to see how well the data aligns with his hypothesis.

“It’s up to remote sensors now to go and take a look at their imaging and their spectral data and decide if they match.”