Hawaii’s latest eruption has much to teach us about hazard mitigation, volcanology, and even outer space. 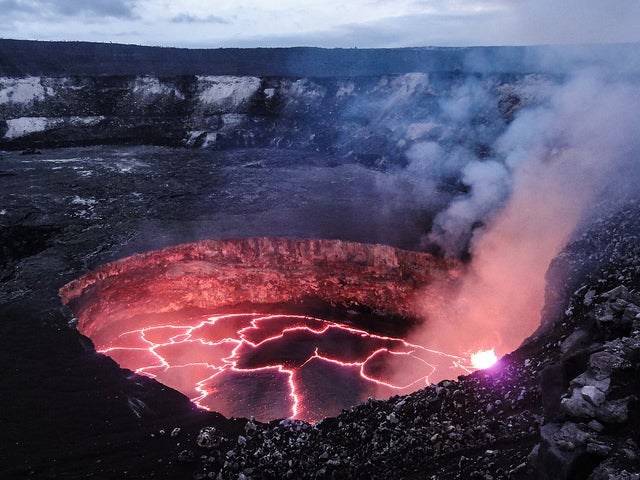 Last week, new lava vents burst open in the earth around the Kilauea volcano on the Big Island of Hawaii, accompanied by the rumbling of earthquakes, and fiery fountains of earth shooting hundreds of feet into the sky. Whether you ascribe the cracks to the unpredictable behavior of the fire goddess Pele (who, according to traditional Hawaiian beliefs, currently resides in Kilauea’s great crater), a flare-up in the chronic rumblings of our planet’s mantle, or both, it’s clear that the blistering molten rock slithering across the island is having a dramatic impact on both the land and the people that live on it.

In just a few short days, the lava has swept through the neighborhood of Leilani Estates, displacing thousands of residents, and eating up dozens of homes. As it continues its flow—this wave is one of countless many since Kilauea’s three-decade-long eruption began in 1983—the volcano has also released tons of vog (that’s short for volcanic smog) into the atmosphere. The main component of the haze, sulfur dioxide gas, is a precursor to acid rain and a potential cause of breathing issues and other health conditions in humans. Tourists, traipsing across the Big Island’s cooled lava flows and summiting its other, dormant peaks, are forced to contend with the dark side of paradise.

“This is not the time for sightseeing,” the Hawaii County Civil Defense Agency said succinctly. But, experts say, it sure is an excellent time for science.

Tracy Gregg is a volcanologist at the University at Buffalo. She studies earthly volcanoes, including Kilauea, often with the hope of better understanding volcanoes in outer space, especially those on our closest celestial neighbors, Mars, Venus, and even our moon. She says while safety is the top priority, “all data are good data.”

The Hawaiian archipelago was first settled by residents of south Pacific islands like the Marquesas who moved north across the Pacific by canoe. Their new home consisted of five major islands, as well as many smaller ones, several of which were still teeming with volcanic activity. While these early Polynesian pioneers and their descendants saw many changes in the volcanoes over time—and perhaps witnessed the formation of whole new tracts of land as lava hardened—they did not create written records, instead passing down the geologic history of the islands through the spoken word.

Recently, some scientists have investigated the oral traditions of these Hawaiian islands and found many stories correspond with verifiable seismic events. Still, Gregg says, contemporary volcanologists rely primarily on data points gathered in the last 240 years, from the earliest days of colonialism to the modern era, where scientists keep round-the-clock watch on volcanic activity from their perch at the Hawaiian Volcano Observatory, which just so happens to sit on the rim of the Kilauea’s great caldera. There, they can monitor magma (that’s the word for molten rock inside the earth) and lava (the name scientists use for magma once it surfaces) as well as other features of the volcano.

Even now, Gregg says, much remains a mystery. The forces driving this volcanic eruption are embedded deep down in the bottom of the ocean, at the earth’s crust, they can’t be observed directly. No tool can go that deep, let alone withstand that kind of heat and pressure. So scientists rely on proxies—namely bulging or deflating magma reserves inside the mountain, steam and other activity in the volcano’s vents, and seismic disturbances like earthquakes—to paint a picture of what’s going on right beneath their feet. “It’s almost like it’s speaking in a code—and we don’t quite have the code broken yet,” Gregg says.

But events like the one taking place at the base of Kilauea this week, while devastating to many, could one day add up to a Rosetta…igneous rock.

“Any more information we can learn about how magma moves in this volcano will help us better predict locations of future eruptions,” Gregg says. Based on the knowledge gained during past eruptions, scientists were able to estimate, within a few miles of accuracy, where the lava flows would appear during this month’s eruption, according to Gregg. They monitored increasing earthquake activity and tracked fissures opening up along the island.Eventually, the authorities were confident enough to call for a targeted evacuation of the Leilani Estates, parts of which were subsequently deluged by piping hot lava. “That’s amazingly accurate from a scientific perspective,” Gregg says. “But from a neighborhood perspective?” Not so much.

In the future, as more data is collected and volcanologists better understand how signals like rising (or falling) magma levels and earthquakes correspond, Gregg hopes to move from directives to evacuate an entire neighborhood, to directives to clear out half a block, or even just a few homes. “There’s a video of the lava flow from this eruption slowly and immeasurably coming toward a car and crushing a car,” she says. With more information, “we could have said, ‘move your car!’”

Data could also provide estimates on exactly how long people had to collect their things. News reports over the last week document resident’s efforts to defy the evacuation and return home to find their pets, or collect their belongings. More recently, though, residents have been allowed back in, “to check on their property” (or, in some cases, what’s left of it), according to county officials. If Gregg has her way, we’d be able to grant citizens even a few more minutes, depending on the impending danger, to evacuate more comfortably. “The best case scenario [is always] to save as many lives and as much property as we can,” she says.

There’s also the potential for lessons from this eruption to be applied off-planet. “When we’re looking at the moon or Mars or Venus, there haven’t been any volcanic eruptions [on these astronomical bodies] in human history, as far as we can tell,” Gregg says. By studying the activity of Earth’s volcanoes, we can hopefully piece together how the volcanic activity on our solar system sisters began and ultimately fell dormant—perhaps even extinct.

As much as volcanologists hope to gain new insight from every volcanic eruption around the globe, an old lesson keeps resurfacing, bubbling up like molten rocks from the core of the earth. “The first people who lived on the island, their permanent dwellings were pretty far away from any active volcanic zones,” Gregg says. “They were pretty aware. They didn’t build in the zones with young rock.” Today, however, people build wherever they want, often prizing a great view over the long-term stability of the site. “Knowledge and respect for the natural world is definitely diminishing with time,” she says. But hope it not lost. “I think one of the important things about these disasters is to remind our culture, there are still things we cannot control,” Gregg adds. “And we have to respect these natural processes in order to live with them.”

While this Kilauea eruption is wreaking havoc, it’s ultimately nothing new. The Hawaiian “hot spot” has acted up a thousand times before, and will do so a thousand times more. How we respond is up to us.