Ask Anything: Could You Build A Spaceship Out Of Wood?

Short answer: Yes, but you’d be asking for trouble. 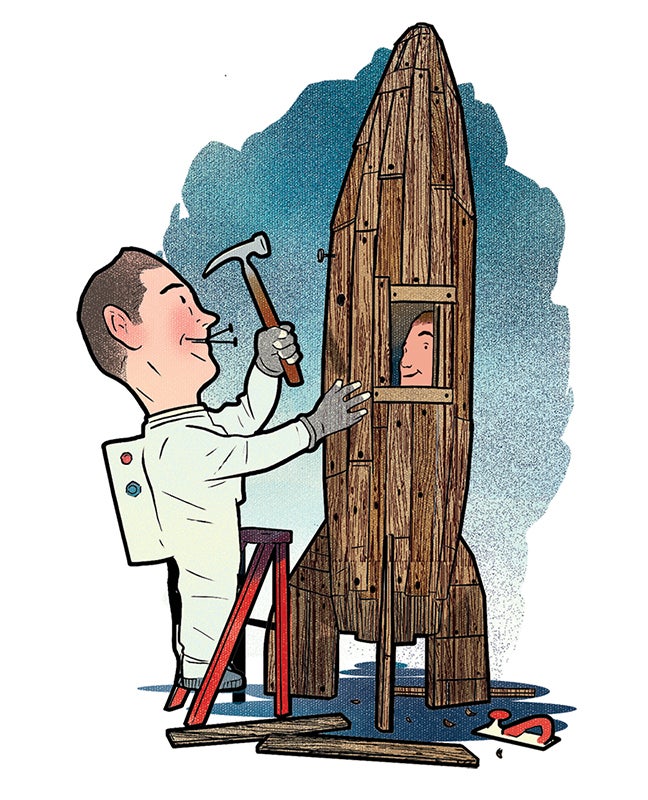 “In terms of strength, wood is pretty good,” says Mike Gruntman, professor of astronautics at the University of Southern California. Early airplanes were built with wood, all the way into the early 1930s. (There were also wooden submarines.) Gruntman thinks it may be possible to build a wooden spacecraft that could survive the stress of a rocket launch.

Once your timber ship made it into space, however, you’d have a lot of problems. For starters, the organic matter would contain a fair amount of water. In a vacuum, that water would leak out and evaporate, which could affect the structure—especially in places where screws and brackets were attached. Even if this process unfolded over many weeks or months, the integrity of the spacecraft might be compromised.

“If I were designing a manned spacecraft, I would make it out of things that do not burn.”

That’s not all. “A spacecraft’s structure doesn’t only serve to hold everything together,” Gruntman explains. It also performs two other key roles. First, it provides thermal conductivity, so that heat can dissipate across the entire surface of the vessel. That becomes significant when one side of a spaceship is exposed to direct sunlight while the other is in darkness, or when thrusters fire at one end. If a spacecraft’s hull were not sufficiently conductive—which would be the case if it were made from spruce or hickory instead of, say, aluminum—then intense heat in certain parts of the craft could damage batteries and other crucial components.

Second, the structure should provide electrical conductivity, since this allows for grounding of the spacecraft and protects against built-up charge. If a wooden satellite were orbiting in space 300 miles up, this excess charge might simply dissipate into the surrounding plasma. But up in higher orbits, the poor conductivity of wood could be a disaster. Wood would also give off gases as it aged, which might damage delicate sensors or other equipment. And finally, wood is flammable. “If I were designing a manned spacecraft,” says Gruntman, “I would make it out of things that do not burn.”