So far, the phenomenon has only been seen in flies, but it’s possible it could be happening in other animals. 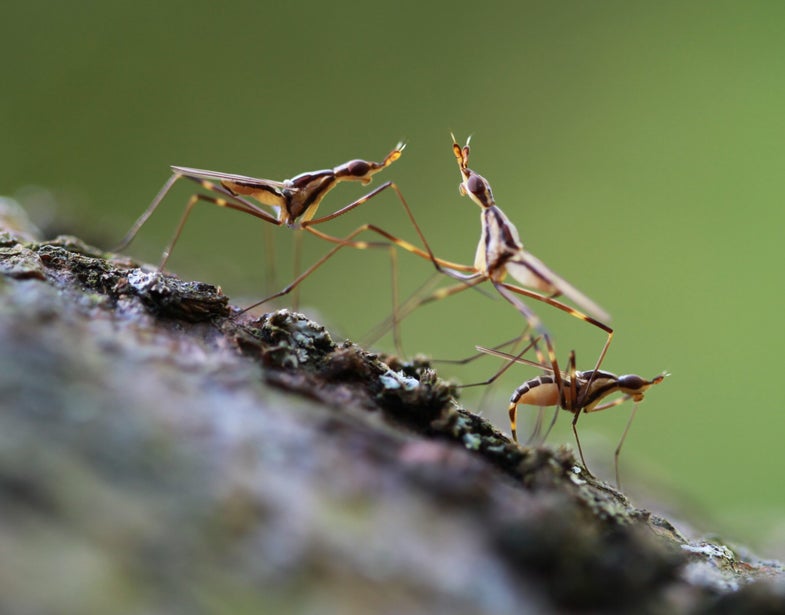 Even after a breakup, past boyfriends can still have a hold over your future relationships (usually by providing a negative point of comparison). But for some types of flies, ex-lovers can pop up in a much more permanent way – by passing on traits to another male’s offspring.

That’s right: It’s possible for a female fly’s children to resemble a previous sexual partner, rather than the male that fertilized her eggs.

Discovered by researchers at the University of New South Wales in Australia, the phenomenon represents a new form of non-genetic inheritance. The idea that such telegony is possible was first proposed by Aristotle, and was a popular theory of heredity in the 19th century, but it was discredited when scientists discovered what genetics was all about.

According to lead researcher Angela Crean, a post-doctoral fellow in the school of biological sciences, the researchers came across this discovery after noticing an interesting paternal effect in their neriid flies. They found that what they fed the fly fathers could influence their offspring’s size. “If we make big males, they produce larger offspring,” says Crean.

An unknown molecule could remain within the female, somehow influencing the development of her kids.

But what they didn’t know was how this trait was passed on to the kids. Did it come from a gene carried over on the sperm itself or was it something within the seminal fluid. Crean explains that sometimes it’s possible that something else within semen can influence an offspring’s traits.

“The entire ejaculate has a whole bunch of other things in it; only 5 percent is the sperm itself,” she tells_ Popular Science_. “The sperm is what fertilizes the egg, but you have all these sugars and proteins and fluid that carry that sperm. And we know it can carry things like STDs and lots of other things like peptides.” Crean sites an example of a known sex peptide carried by semen that can influence a female fly’s behavior, causing her to lay more eggs and reducing her wiliness to mate with other males.

The researchers suspected that something like this peptide could be causing the sizing effects seen in the offspring. So the team decided to create a group of large and small male flies, by feeding them different diets when they were larvae. They then mated these diverse-sized males to immature females (so they could not produce eggs).

Then when the females were mature, the researchers re-mated them to either a big or small male and studied the resulting offspring. That’s when they found that the offspring’s size was determined not by their fathers, but by their mothers’ previous mates.

This means that an unknown molecule in the males’ ejaculate could remain within the female, somehow influencing the development of her kids. Crean says the discovery complicated everything they know about how variation is transmitted between generations, which is what drives their research. She notes it’s possible that such a scenario could be seen in other species as well.

“There are a lot of old wives’ tales and very anecdotal evidence and rumors that this sort of thing happens from animal breeders,” Crean says. “But I’m not aware of any scientific evidence that shows this.” And as for such an effect occurring in humans, Crean says it’s nearly impossible to prove, as you can’t do these types of manipulative experiments on people. But she’s not keeping her mind closed: “There is a possibility.”

The researchers published their work in the journal Ecology Letters.