An unexpected composition of two meteorites could rewrite our understanding of the Red Planet’s history. 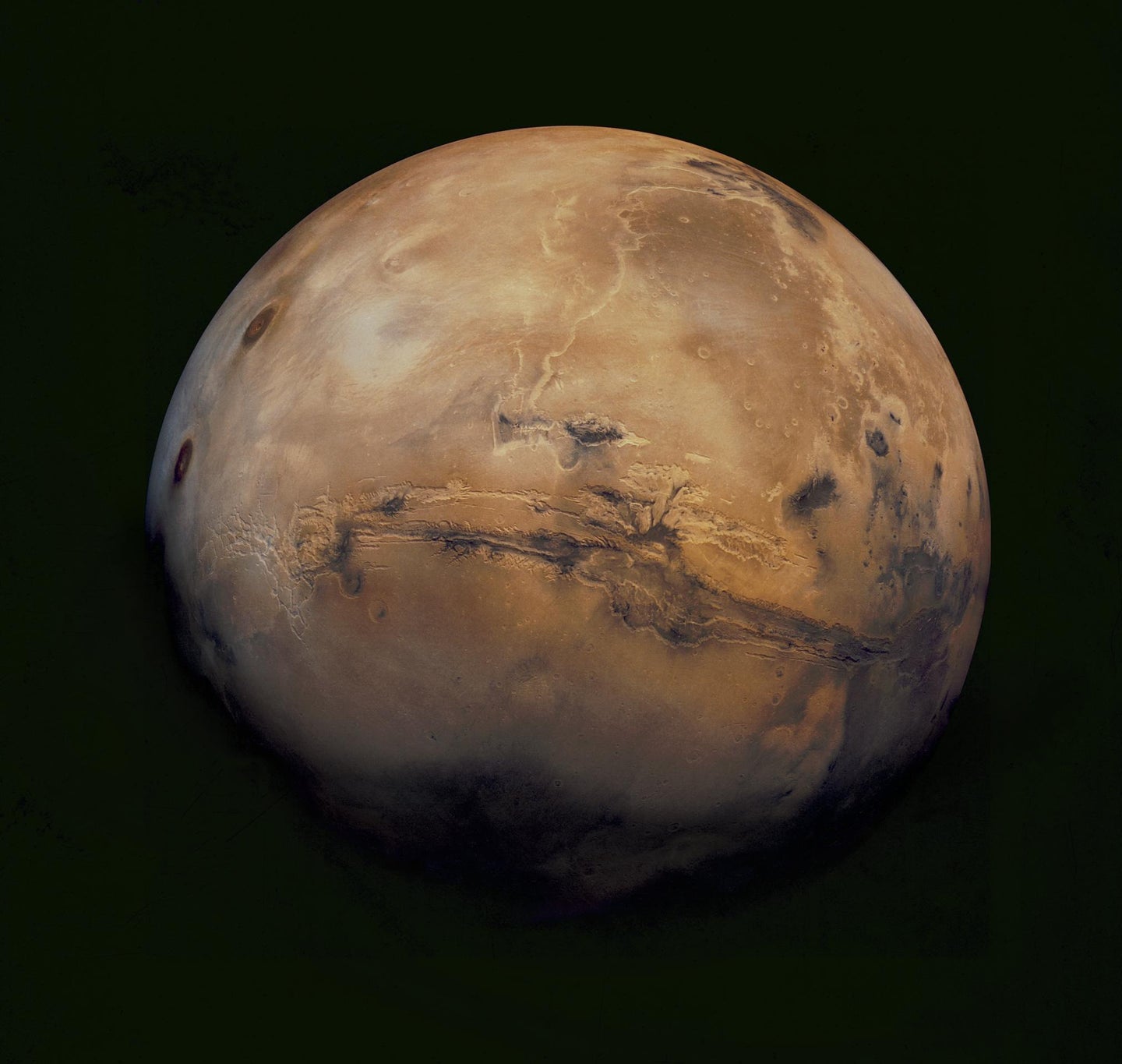 From trace elements inside Martian rocks, researchers are piecing together how the planet came to be. NASA/JPL-Caltech
SHARE

The solar system wasn’t always the set of calmly spinning orbs we see today. In its earliest epochs, mini-planets swarmed around the sun, mixing together in cataclysmic smash-ups. This game of cosmic billiards played out so violently that worlds like Earth and Mars started out their lives as largely liquid gobs of smoothly blended rock. Or so many researchers have thought.

Now, careful scrutiny of two ancient hunks of Martian crust has led a research team to conclude that the Red Planet may have formed somewhat differently. Their geochemical sleuthing, which appeared this week in Nature Geoscience, suggests that beneath the planet’s rocky shell sit two types of Martian material—unmixed relics of the baby planets that came together to form Mars. The researchers teased apart these twin substances based on traces of water, which also complicates the standard theory of how rocky planets like Earth and Mars got wet in the first place.

“We weren’t even planning to test that whole thing,” says Jessica Barnes, a cosmochemist at the University of Arizona. “But it was the results that we got from the crust that made us have to go back and kind of look at that hypothesis.”

The tale of the planet’s formation, the team unexpectedly discovered, can still be read in the distributions of its tiniest atoms: hydrogen. Most hydrogen atoms are light, containing just one proton. But occasionally they come double-stuffed with a proton and a neutron. These particles go by the name deuterium, but they’re basically just heavy hydrogen atoms. Researchers can study the history of various parts of a planet by measuring how rare the heavy variant is compared with its common lighter form.

Mars’s atmosphere, for instance, seems to have a relatively high concentration of the heavy stuff, because regular hydrogen is more likely to leak away into space over billions of years. Some researchers have suspected that surface rocks shed some light hydrogen in the same way, but the few Martian rocks that wound up on Earth haven’t given any clear answers. “Martian meteorites have been an enigma for a long time,” Barnes says, “because they plot all over the map.”

Initially, the team intended to study whether the crust had lost light hydrogen like the atmosphere did. To that end, they analyzed two unique, meteorites that got tossed into space by ancient impacts and crash-landed on Earth. One, nicknamed Black Beauty for its dark color, is an amalgamation of many crustal rocks, some dating back to 4.4 billion years ago (Mars is about 4.6 billion years old). The other meteorite is about four billion years old. Both show signs of having gotten wet at least once between their formation and modern day. Considering their ages and these wetting events, Barnes says, we have “a fairly large piece of Mars’s history right there just in two samples.”

And when they reconstructed that history, the team found something puzzling: the relative amounts of the two forms of hydrogen in the Martian crust appears to have remained unchanged over the eons, unlike the atmosphere.

But then they thought more carefully about the role of the alien crust. Where incessant grinding between Earth’s continents constantly sucks water (and hydrogen) out of the air and buries it, Mars’s (nearly dead) crust remains frozen in place—a crystallization of the planet’s interior. To figure out what its anomalous hydrogen content was trying to say, the team would have to dig deeper.

They dove into the scientific literature, seeking hydrogen measurements of samples of Martian rocks that originated beneath the crust in the mantle—a more lava-like layer making up the bulk of the planet. They focused on lava rocks falling into one of two categories, depending on their composition (in terms of elements), which was a sign that they came from two different locations in Mars’s mantle.

The two groups of deep-down rocks also differed in terms of how much of each hydrogen variant they contained. And when the researchers modeled how the two classes of rock might have fused to make the crust, they found an intermediate hydrogen ratio similar to the value they had measured in the two meteorites from earlier on.

In other words, these two lines of evidence suggest that deep within Mars lie two distinct types of rock left over from the small planets that formed it, like a poorly blended smoothie. Had young Mars been enough of a hothead to fully melt through to its core, as some theories suggested, these rock types would have thoroughly mixed and no traces of the different building blocks would remain today.

And because hydrogen mingles with oxygen to form water, the new result also hints that the Red Planet’s modest wetness has multiple origins. One common theory holds that rocky planets like Earth and Mars got much of their water from a particular type of meteorite known as carbonaceous chondrites. But water-rich carbonaceous chondrites tend to all have similar amounts of the two hydrogen types, which clashes with the dual nature of the Martian interior.

Next, some of her colleagues will work on developing simulations of Mars’s early days to find out how deep the mixing melt might have gone. Such models could be useful for figuring out how all of the solar system’s rocky planets formed. In the meantime, Barnes plans to study a wider range of Martian rocks to put the new theory on even firmer ground.

“We’re going continue analyzing new samples and analyzing other meteorites,” she says. “There’s plenty of work to do.”