Climate Change May Be To Blame For California Drought 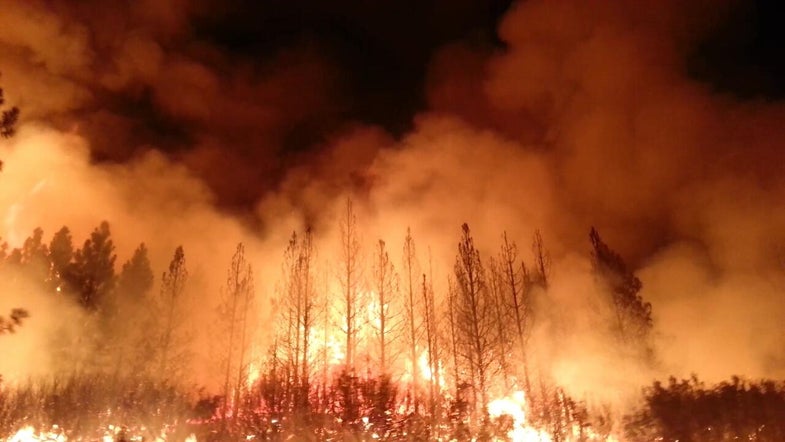 The Rim Fire in the Stanislaus National Forest near in California began on Aug. 17, 2013 and is under investigation. The fire has consumed approximately 149, 780 acres and is 15% contained. U.S. Forest Service photo. Forest Service unknown
SHARE

There is something coming between Californians and their water, and according to a brand new report from the American Meteorological Society, man-made greenhouse gas emissions are likely at fault.

Much of the American Southwest has been in drought conditions for more than a decade—harsher in some places than the dry spell that caused the Dust Bowl of the 1930’s. Until recently, however, California had largely been spared. That changed when an air mass dubbed the Ridiculously Resilient Ridge appeared over the Pacific in the winter of 2013—an event Daniel Swain, lead author on the study and weather blogger, says is likely the result of human activity.

The Golden State usually has clearly defined wet and dry seasons. In the summer, hardly any water falls and sunlight bathes the coast. When winter comes and much of the country lies under a frozen blanket, Californians await rainstorms that roll in on the jet stream from the Pacific to water their plants and fill their reservoirs. That atmospheric current is vital to the health of California. Without it, the state is vulnerable to crop failures, forest fires, and water scarcity. Researchers peg agricultural cost of the current drought at $2.2 billion and 17,000 seasonal and part time jobs–and that’s just for 2014.

Here’s where the Ridiculously Resilient Ridge (RRR) comes in. Swain tells Popular Science that the high pressure air mass blocks low pressure, water-carrying storms from reaching the coast. “The ridge is sort of like a big boulder sitting in a very narrow stream,” he says. Similarly, the mass is shunting away low pressure storm systems that normally carry water to California, often driving them away from the West Coast altogether and up into the Arctic.

Ridges have appeared before, but the RRR is bizarre in how long it has held on. In Earth’s shifting atmosphere, air masses usually last for periods of hours or days. The RRR showed up more days than it didn’t in Winter 2013. Then it did something extraordinary: it lasted into a second winter.

“This is a really rare event,” said environmental scientist Noah Diffenbaugh, another researcher on the report. Such a multi-seasonal formation is unprecedented in the climate record.

Swain and his colleagues studied the drought using a model that combines data about global air circulation patterns, greenhouse gas emissions, ice loss, and precipitation. The model allows the researchers to compare real world conditions to projections of a world without all the heat-trapping gunk humans have pumped into the air, and it showed that human-produced greenhouse gasses made the appearance of the Ridiculously Resilient Ridge at least three times more likely.

As for what Californians can expect this winter, Swain doesn’t have an answer. “We’re comparing today to what might have been,” he explains.

Whether the Ridge will return for a third go-around in the 2015 rainy season is still a mystery, but the implications are clear.

With the havok of drought and 2014 so far being the warmest Californian year on record, “Already we’re seeing that we’re in a different climate regime,” Diffenbaugh says.