The planet is more of a hellscape than we thought. 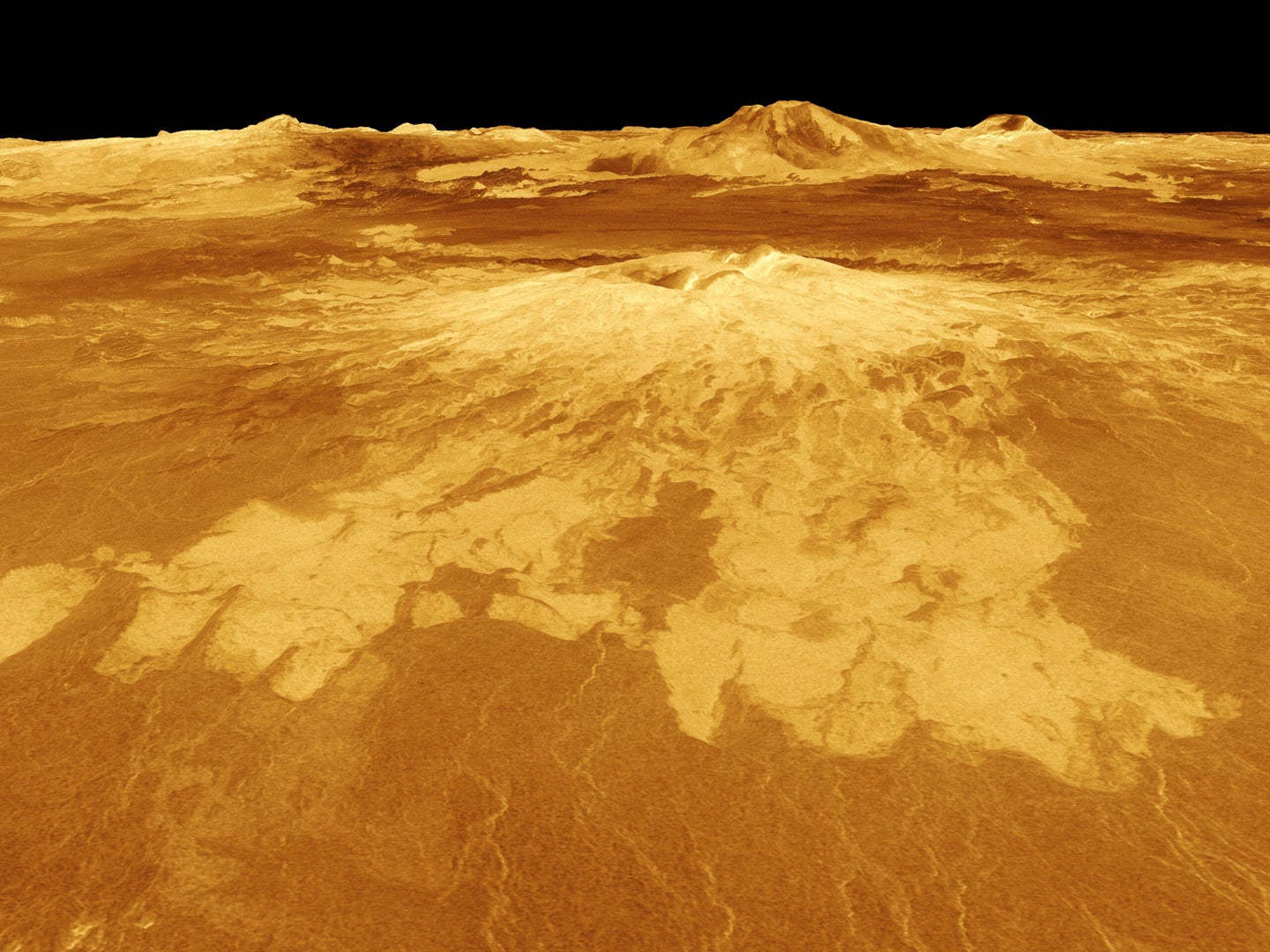 A volcano named Sapas Mons dominates this computer-generated view of the surface of Venus. NASA/JPL
SHARE

In many ways—size, density, chemical make-up—Venus is Earth’s fiery twin. Sure, this radiation-bombarded, sulfuric-acid-raining, blistering hellscape of a planet is hardly a haven of habitability like our home. But the longstanding hypothesis that Venus, like the Earth, is a volcanically active planet, is backed by new evidence. Researchers have identified three dozen features on Venus that appear to be recently active—and probably still are today.

“For the first time, we were able to pinpoint specific structures and say, ‘Look, this is not an ancient volcano but an active one,’” says study co-author Laurent Montési, a professor of geology at the University of Maryland. These telltale structures are in the form of rocky, doughnut-like terrestrial features planetary scientists call coronae.

In the study, scientists led by Anna Gülcher, a geophysicist at the Swiss Federal Institute of Technology in Zürich, Switzerland, used high-resolution 3-D simulations to model how the coronae that dot Venus’ cloud-cloaked surface form and grow. Most coronae appeared to be inactive, but they found that 37 structures showed signs of activity within at least the last few million years—a blink of the eye in geological time.

The study, published this week in Nature Geoscience, “adds to a growing groundswell of evidence that Venus is geologically active,” says Suzanne Smrekar, astronomer and principal investigator of NASA’s VERITAS, a proposed mission to the hot planet, who was not involved in this study.

When plumes of superheated rock from near the planet’s core rise through the mantle and crust, they destroy patches of the planet’s surface, creating these oval-shaped features. Similar structures formed the Hawaiian Islands on Earth.

According to Montési, coronae on the planet’s scorching surface reveal the geologic activity that’s going on under the hood. When a rock plume is active, molten rock slowly rises in the center of the corona. At the edges, however, cooler, denser rock sinks back into the planet’s innards, dragging parts of the crust down with it and leaving cracks and trenches around a corona’s outer edges.

“That tells us that the plume is still there, or has not gone for more than a couple million years,” Montési says. As this rock plume activity dies away, the downward pull ends and the crust bounces back up and levels off.

Once researchers parsed active features from the non-active ones, they scoured decades-old radar images of Venus from NASA’s cloud-penetrating Magellan spacecraft to find coronae that fit the bill.

Many scientists long had thought Venus, lacking the plate tectonics that gradually reshape Earth’s surface, was essentially dormant for the past half billion years, “despite its geology on the surface telling us anything but,” says Paul Byrne, a planetary geologist from North Carolina State University who was not involved in the study. Coronae were believed to be signs of ancient activity on the Venusian surface which had since ceased; most researchers thought Venus had cooled to the point where any hot material near the core would not be able to reach the surface. But the new study suggests otherwise.

“What this paper brings to the discussion that’s new is the possibility that the different styles of coronae might reflect not only differences in plume and lithosphere properties, say, but might be different stages of the same process,” Byrne adds. In other words, some of the coronae are active, some are vestiges of ancient eruptions and some are only temporarily dormant.

Researchers also found that most of the coronae on top of active plumes form a belt in the planet’s southern hemisphere, which they have dubbed the Ring of Fire in reference to our Ring of Fire, a roughly 25,000-mile chain of volcanoes on Earth. Only a handful of active plumes are located outside of this band.

The belt likely coincides with a zone that’s more active than others, Montési says, and may serve as interesting targets for detailed investigation by future spacecraft missions. Alas, he points out, only a few missions such as NASA’s VERITAS and ESA’s EnVision Venus are in the works in the coming decades.

“It’d be really important to look back at the places we suspect have recent activity and see if there’s been any change over the last few decades,” Montési says.

Such missions would teach us not just about Venus, he adds, but also how the barren, hellish wasteland and Earth—the definition of habitable—have wandered down drastically different evolutionary paths.