What we thought was lava might be mud instead. 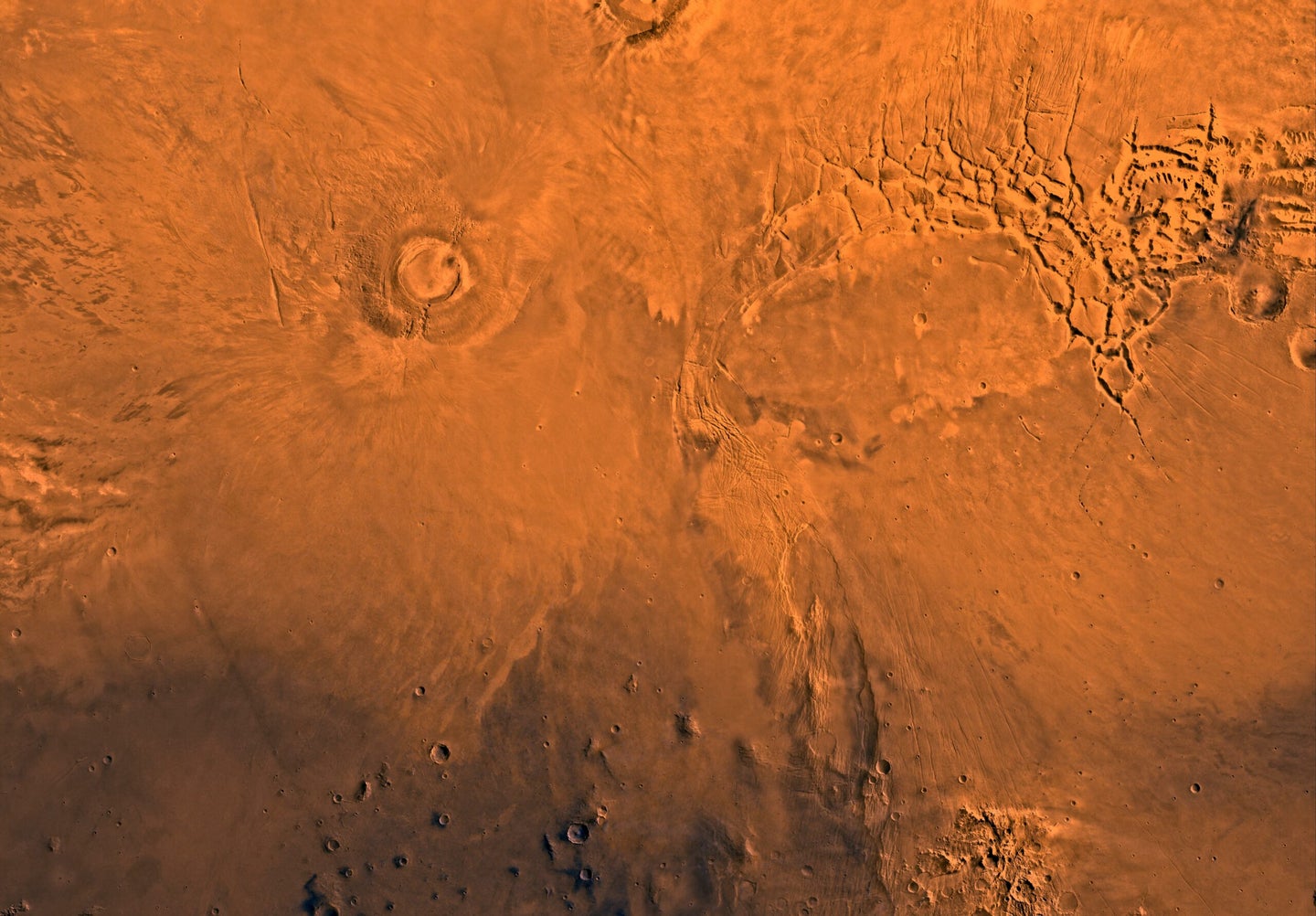 Arsia Mons once spewed molten rock across the surface of Mars, but some smaller volcanic features may have come from another source. NASA/JPL/USGS
SHARE

Mars’s northern lowlands are dotted with tens of thousands of what appear to be run-of-the-mill volcanoes, given the lava-like ripples and fingers that appear around them. But geologists debate whether these bumpy landforms are really frozen magma. In a select few places on Earth, mud erupts rather than molten rock. Could Martian orbiters be sending back pictures of mud volcanoes?

Absolutely not, assumed Petr Brož, a geophysicist at the Czech Academy of Sciences. The circumstances required—sediments buried in precisely the right way—were just too unlikely. Plus, would mud even slosh after hitting the frigid surface? After recreating the scenario in a lab, Brož and his team now have their answer: Muddy mixtures on Mars would flow nearly identically to the way lava flows on Earth, although for completely different reasons, they announced in Nature Geoscience this week. The finding means that the volcanic forms on Mars could be made of either rock or hardened mud, a frustration to geologists many millions of miles away.

“The work will be much more complicated now,” Brož says. “We cannot rely on [shape] only.”

But if researchers can learn to tell the two apart, they’ll be rewarded with a host of tantalizing sites for future exploration, as mud volcanoes may also be promising places to look for life.

Brož spent a decade skeptically scrutinizing Martian photographs and trying to argue that certain features proved that the volcanic outcroppings were rocky. Eventually, he realized that to convincingly disprove the existence of mud volcanoes, he’d need to answer a simpler question: Can mud even flow on the Red Planet? To find out, he sought a little piece of Mars on Earth, and collaborators who weren’t afraid to get their hands (and expensive machines) dirty.

Brož found what he was looking for with the Open University Mars Chamber in the United Kingdom, a six-foot by three-foot cylinder reminiscent of a deep-sea submersible that could match the low air pressure of the Martian surface. Most importantly, it wasn’t reserved exclusively for high-precision research that flecks of dirt could disrupt, such as testing aerospace equipment.

“You have a huge number of vacuum chambers around the globe, but only a few of them where the head of the laboratory has enough courage to let you make crazy experiments inside,” Brož says. “I’m sure they’re still finding mud in the chamber one year later.”

The researchers chilled a bed of sand to minus 20 degrees Farenheit, stuck it in the chamber, and rigged an apparatus to tip a solution of water and fine particles out over the “Martian” ground. What they saw was both alien and instantly familiar. In the next-to-airless environment, the mud boiled—much as how water boils quicker at higher altitudes. This boiling wicked away heat, cooling the mud until its crust froze. Its still-liquid innards then broke free, forming inches-long rivulets that snuck down the tray and formed a shape well-known from Hawaiian lava—although that rock cools from contact with air, not through boiling.

“The way they creep forward, stall, and have a breakout, it’s just like what you see in ‘pahoehoe’ flows in regular volcanoes,” says Lionel Wilson, a geologist at Lancaster University who helped analyze the physics of the experimental videos.

After a series of trials comparing a range of Mars-like and Earth-like conditions, Brož concluded that his intuition had been partially mistaken. Martian mud did not freeze. It could flow smoothly enough for volcanoes to be possible. But he also found validation of his instinct that comparing landforms on Earth with those in an alien Martian environment is a dangerous game. In this case, shapes that perfectly match terrestrial lava flows may be something else entirely.

“[This study is] something that will open up a whole new line of research that will help us to understand other features that maybe have been interpreted as lava and they well could have been mud,” says Dorothy Oehler, a senior scientist at the Planetary Science Institute in Arizona who was not involved in the vacuum chamber experiments.

A geologist on the ground could sort rock from dried mud with a single swing of her hammer, but for the foreseeable future researchers will have to stick to long-range photography. Further mud studies, especially those involving bigger buckets of muck, may help geologists identify behaviors specific to Martian mud. An upcoming publication from Brož and collaborators, for instance, will detail a freaky new behavior lava could never match: when researchers poured the liquid onto “warm” sand at 70 degrees F, it boiled so violently that it briefly levitated like a hovercar.

The consequences of the lava-vs-mud debate may someday spill beyond the geoscience community. Making mud takes warm water. And making a mud volcano takes warm water deep underground—where harsh cosmic rays can’t reach. Biologists expect that these environments represent some of Mars’s friendliest areas for life, but they’re nearly impossible to explore. The mole instrument on NASA’s InSight lander, for example, has spent a year struggling just to scratch the surface.

But if mud spurted up to the surface millions to billions of years ago, it might have brought along some Martian microbes along for the ride. And if geologists can nail down some definite mud volcanoes, future rovers could go prospecting for microfossils, no burrowing required. “It’s a window into the subsurface,” Oehler says.