This Is the Last Image the Spirit Mars Rover Ever Saw

Despite NASA’s attempts at anthropomorphism, the Mars rovers do not talk, so Spirit was unable to utter any last words.... 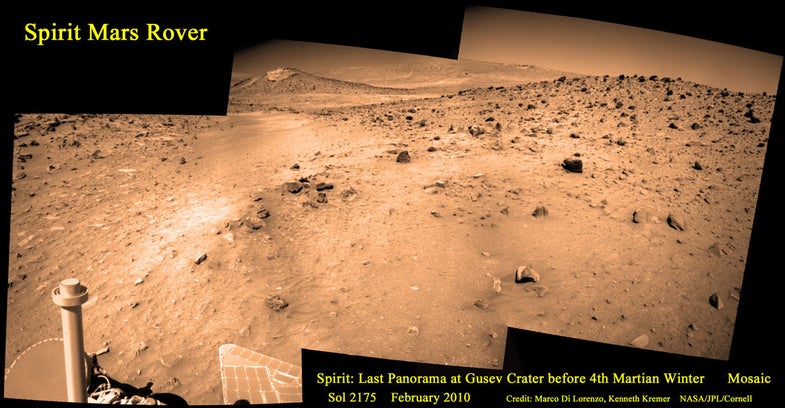 Despite NASA’s attempts at anthropomorphism, the Mars rovers do not talk, so Spirit was unable to utter any last words. But we did get to share its final view. Behold, our departed rover’s last Martian vista, the Columbia Hills.

This was the last panorama Spirit transmitted to Earth, on its 2,175th sol on Mars. (A sol is a Martian day, and it is 3 percent longer than an Earth day.) The rover’s final transmission came just 35 sols later, on March 22, 2010. With its wheels mired in soft sand, it was unable to turn its solar panels toward the sun to gather sufficient sun through a particularly harsh Martian winter.

NASA tried to hail the rover for more than a year before officially giving up last week. Its twin, Opportunity, is still going strong on the other side of Mars.

The rover science team will hold a planning meeting in July, and team members told Universe Today that event would serve as a sort of Irish wake for Spirit — filled with celebrations of the rover’s accomplishments during the past six years.

NASA shared this image through its Astronomy Photo of the Day. The panorama includes the Columbia Hills, each named for the astronauts who perished in the 2003 Columbia accident, and a hill nicknamed von Braun. That’s the hill with the light-colored peak near the top center of the image, explain astronomers Robert Nemiroff of Michigan Tech and Jerry Bonnell of NASA Goddard Space Flight Center. The von Braun mound and a related feature named Goddard could be the result of past volcanic activity on Mars, which was also evident in the soft sulfate-rich deposits that caused Spirit’s wheels to get stuck.

Spirit was driving toward von Braun when it got bogged down. Now it provides the backdrop for Spirit’s final resting spot.