New evidence points to volcanic activity just 50,000 years ago, a short timespan in the grand scheme. 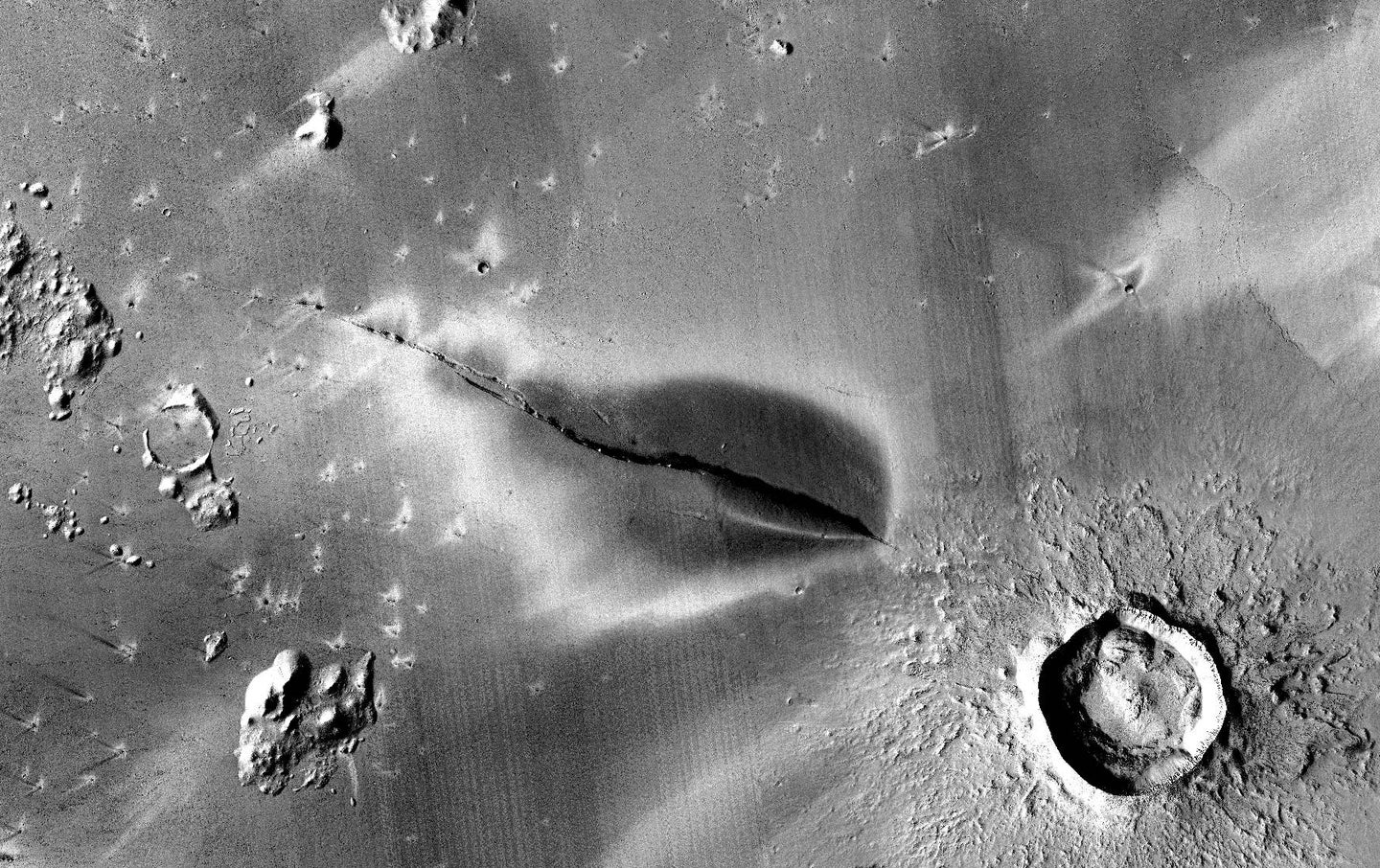 Not so long ago, most scientists thought of Mars as dead and cold. But, as we previously reported, microbial life could be hiding beneath the red planet’s surface, kept warm by its core and fed by radiation from rocks. Now, another study shows that Mars might have hosted volcanic explosions as recent as 50,000 years ago—practically last week in geologic time.

Such recent activity raises the possibility that, volcanically, Mars “may still be active, even today,” says David Horvath, a planetary scientist at the Planetary Science Institute in Tucson, Arizona, who led the study while at the University of Arizona.

What’s more, NASA’s InSight mission has picked up Marsquakes coming from the area Horvath studied. The quakes suggest there could still be molten magma below the surface, warming the frozen underground and making make liquid water possible around volcanic hotspots, Horvath says. That could create a subterranean haven for life under Mars.

The team, based out of the University of Arizona, looked at a single fissure, one of several splits in the ground known collectively as the Cerberus Fossae. They found it surrounded by a dark region which they think is ash and debris from a volcanic eruption. The fissures stretch across the Martian surface for miles, although they’re fairly shallow. The one in question is only about 20 meters deep, Horvath says.

They focused on this particular fissure because it stands out. It’s surrounded by visibly dark material which retains heat well, according to thermal imaging, Horvath says. The researchers think lava flowed out of the fissure, creating the dark patch. The spot isn’t too far from the volcano Elysium Mons in the equatorial region of Mars known as the Elysium Planitia.

They dated the feature by counting the craters in the dark layer that coats it. With basically no weather on Mars, impact craters stick around on the surface for eons. By counting the number per area, you can estimate the age of the area—the older it is, the more craters you should find.

Some of the craters were dark—the same color as the surrounding zone—and some lighter craters peeked through. The team interpreted this as a sign that the old craters got filled in with the darker lava and ash and the new craters broke through that dark layer, revealing the rock underneath.

The crater counting technique they use to estimate the age is “pretty standard,” says Erika Rader, a volcanologist at the University of Idaho who wasn’t involved with the study. But their age estimate relies on the assumption that the feature is the result of volcanism, she says. It’s possible the features aren’t volcanic at all, though we’d need a closer look at them to be sure—ideally a microscopic look.

“There’s a ton of sediment and there’s a ton of wind on Mars,” she says. Seen from afar, these moving particles can create similar patterns to volcanic processes.

If Mars was volcanically active, though, it’s not impossible that life could be hanging out in little underground islands around the larger Martian volcanoes. If Mars volcanoes are similar to those on Earth, they could have been active for millions of years, preserving those habitable pockets, Rader says. But it’s still a very extreme environment. By contrast, one deep underground and fed by radiation would probably be more stable, she says.

As for the possibility of current volcanic activity on Mars? “I want it to be true,” Rader says. “But … this paper alone would not convince me of that.”

Between InSight’s findings of Marsquakes and heat measurements on Mars, Rader says there’s “clearly enough evidence” to warrant a Mars mission dedicated to finding out whether the red planet still has a molten core.