The caves are an excellent facsimile of lava tubes on other planets. 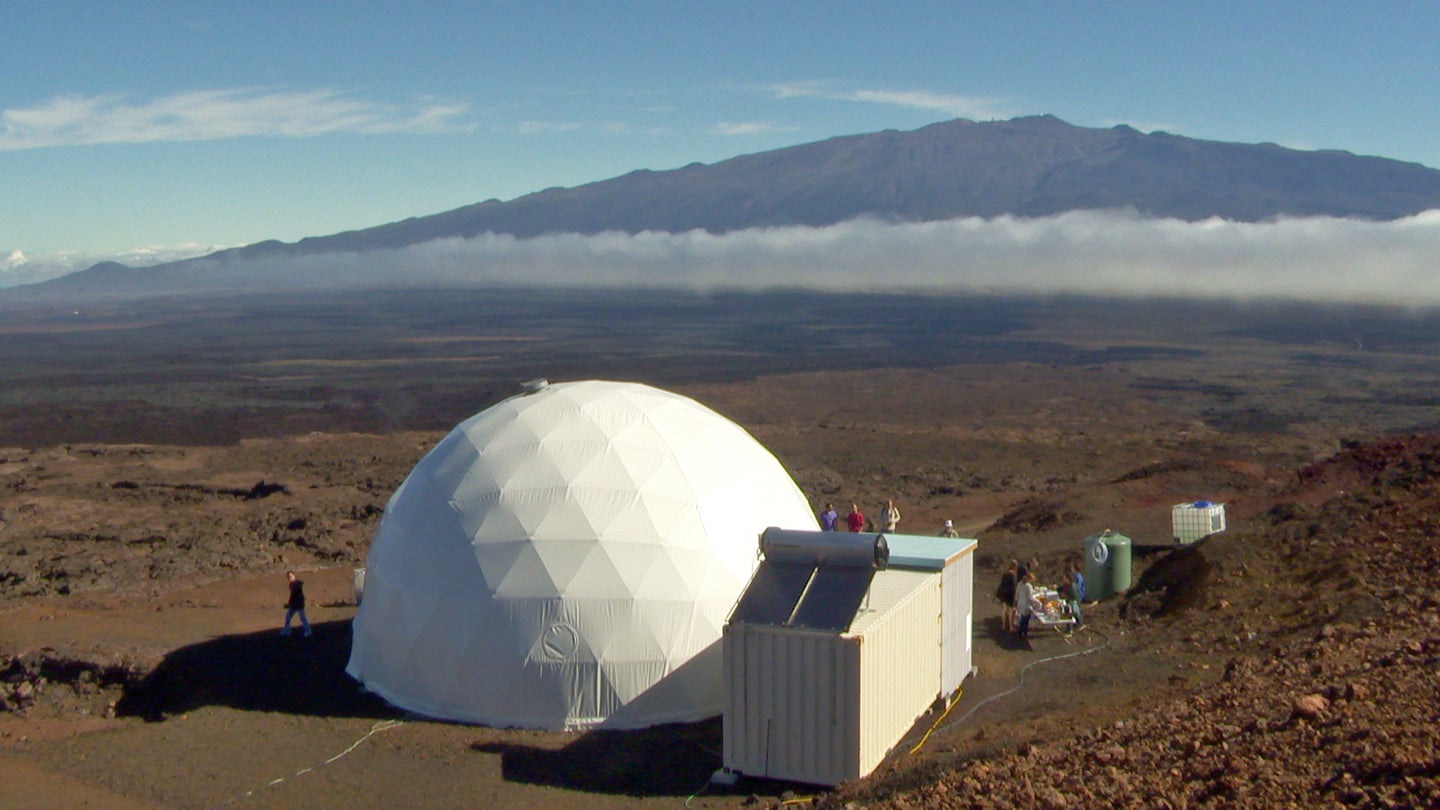 Somewhere along Mauna Loa in Hawaiʻi, there is what looks like an oversized golf ball housing the HI-SEAS facility. The dome sports six small rooms, a bathroom, a kitchen, a research lab, and relaxation area. It’s surrounded by solar panels on the ground outside and is attached to a shipping container for storage. All of this fits in a neat 1,200 square feet, just over a quarter of the size of a regulation basketball court. And within this dome, groups of six people live and train together for weeks or even months at a time—disconnected from the world outside the dome, they’re preparing to one day live on the moon and Mars. From the volcanic surfaces of Hawaiʻi to the arid deserts of the Atacama, humans are finding clever ways to prepare for life beyond our blue dot.

That is what Michaela Musilova spends her days investigating. As the director of the HI-SEAS facility, the product of a research program funded by NASA, she organizes missions that simulate, to the best possible degree, what life could look like on non-terrestrial surfaces. Musilova and her teams are looking at answering several questions that will arise once we embark: What food will we eat when we don’t have soil to grow it in? Will it be safe for us to explore Mars outside of the bubble we hope to create? And how will we cope with living in close quarters with six other humans for years at a time?

Testing out these scenarios on Earth can be a challenge, so space exploration hopefuls travel to analog territories, the places that might most resemble what we find on Mars and the moon. Mauna Loa is an active volcano, and the surrounding landscape is littered with hollowed-out lava tubes that once carried cascading torrents of molten lava. Its volcanic terrain is made up of material similar to what is on the moon today and is suspected to be on Mars, at least in part. This allows geologists and astrobiologists to conduct research that will mimic the scenarios astronauts will encounter on Mars and help them practice the research they will eventually have to carry out.

As we prepare for extraterrestrial life, we need a better understanding of the environments that we are going to encounter. If Mars were covered in thick, green jungle, we would probably be in a bubble somewhere in the Amazon. Instead, for their Mars missions, the scientists living in the dome don extravehicular activity suits every time they leave the dome to explore the lava tubes, conduct research, and test out new equipment.

They communicate with mission control every day, which on Mars requires a 20-minute delay for messages to travel each way, and subsist on a diet of freeze-dried food and limited water. But they’re not just playing house, the Mars-edition. The HI-SEAS missions are a part of efforts by the International MoonBase Alliance (IMA)—an association that seeks to unite space agencies, space companies and scientists—to emulate what life really could look like, to practice the standard procedures that may become our new normal, and to learn how to interact with whatever life might already exist.

Though the volcanoes on Mars appear to be much older and to have different rock compositions, Musilova says that there are enough similarities in the geological features that make it worthwhile for us to explore the lava tubes here at home.

“We’re still hoping to find life that could exist there today, but we’re more hopeful to find at least these biosignatures or fossils,” says Musilova. “But in order to even know what to look for, and then to design instruments that could detect these biosignatures, we first need to understand what kind of signatures life leaves behind in similar environments on Earth.”

The lava tubes on the moon are not as promising for astrobiology. Instead, they’re good news for space architects. After the rush of molten lava evaporates, an outer shell hardens and remains. Scientists like Musilova hope that these structures can be used as shelter from the harsh lunar environment.

Bernard Foing, doesn’t just dream of shelter within these lava tubes. He imagines houses and even cities. Foing is the director of the International Lunar Exploration Working Group, a public forum affiliated with the IMA but sponsored by space agencies dotted around the globe from France to South Africa.

Since the gravitational force is lower on the moon, Foing suspects that lunar lava tubes will be even larger than the ones found on Earth. The lava tubes would also provide protection from the elements. They would be able to withstand cosmic rays and meteorites, but also provide a much more temperate environment than on the extremely volatile surface. Moon surface temperatures can range from 100 to 400 degrees Kelvin. Lava tubes, both on Earth and the moon have a much smaller temperature variation, since they exist below the surface and are insulated against the extreme temperatures above.

But this kind of space exploration is also tethered dangerously to space colonisation. Is Mars really ours to make habitable? Currently, there are scientific and legal guidelines that prevent us from contaminating existing life forms on the red planet. Rovers and spacecraft go through extensive sterilisation efforts to prevent us from accidentally wiping out extraterrestrial life with terrestrial bacteria or viruses.

[Related: Lunar caves are the next exploration front]

“We have to be careful that we will not contaminate the layers that could be liquid, and then propagate all our germs there. And at the moment, it’s forbidden to bring your Earth life to Mars,” says Foing.

Though we still have to reckon with questions of domain and rights, all this preparation is not being done in vain for some. The IMA believes that eventually we will be able to build a base on the moon and start a moon village.

“We are on the first step, we are testing a little moon base in the volcanic environment of Mauna Loa, which is very similar to the moon,” says Foing. “[In] the next phase, we will build a moon base using basalt from Hawaiʻi to build the base itself, like we would do on the moon. And then after that we will contribute to building the base on the moon.” That might sound outlandish, but this work is funded by the likes of NASA and the European Space Agency, both of whom plan to build some type of lunar colony.

Foing hopes that the IMA will be able to prepare 10 people to live on the moon permanently, before slowly growing its population into the very first lunar village. While leaving the planet will be far from easy, for believers and optimists like Foing, that future is imminent.

“It will be a destination for some humans to go and live there. I, myself, plan to retire on the moon. So maybe within 10 or 20 years, I’ll be there and retired!” he says. “And I’ll look at the beautiful Earth in the sky.”