How It Works: The Next-Gen Wind Turbine

To take advantage of the strong winds that blow over the ocean, this gearless turbine uses a giant ring of magnets and 176-foot blades 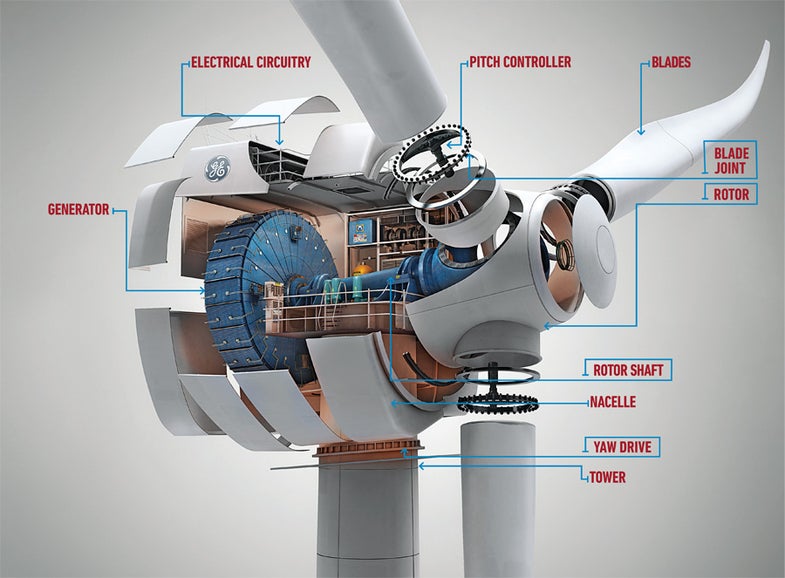 There’s enough wind energy along our coastlines to power the country four times over, and the race is on to build the best offshore turbines to capture it. Manufacturers worldwide are experimenting with two techniques: ever-longer blades to harness more gusts, and simplified drivetrains (including new generators) that slash the need for costly repairs at sea. GE’s upcoming machine, slated to go online in 2012, will combine both into one package. 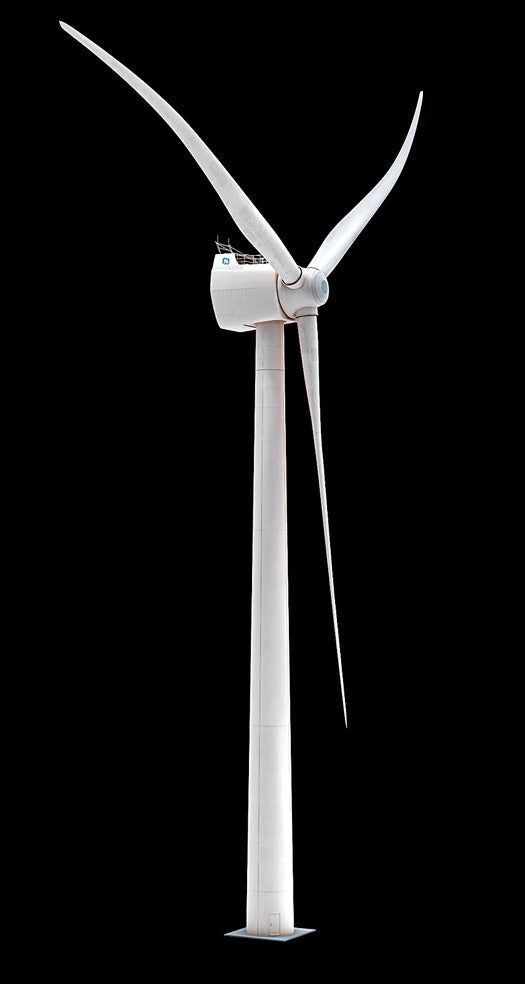 A Twist on Blades

The longer a turbine’s blades, the more wind it captures and the more electricity it creates. “If we could, we would just build infinitely longer blades,” Mercer says. “The problem is, blades get heavy and flexible.” That flexibility, coupled with the force from very high winds, can bend blades so much that they burden the machine or even smack the tower. So GE designed a blade that twists as it bends. It’s curved backward about eight feet, instead of extending straight out. When a gust pushes the tip up, the blade twists slightly around its curve—instantly angling itself so that it bears less of the gust’s brunt yet still captures a large part of its energy.

GE created lightweight 176-foot blades—about 40 percent longer than the average—with a more aerodynamic shape. The blades will attach to a drivetrain that does away with many of the moving parts, including the gearbox, that are prone to breakage and energy loss. A direct-drive mechanism replaces gears, and permanent magnets replace the electromagnets that require starter brushes, coils and power from the grid every time they fire up. The blades are now being tested in the Netherlands, and the drivetrain in Norway. Combining the two should result in a turbine that captures 25 percent more wind power than conventional models, so it can operate more often at its full four-megawatt potential—enough to power 1,000 homes.

Design Highlights on the Windmill

Generator: The 90-ton generator consists of a nearly 20-foot ring of magnets that spins to produce current. Its large diameter lets it create a lot of power when turning slowly, at the same 8 to 20 rpm as the blades, so it doesn’t need a gearbox to speed it up to the thousands of rpm most megawatt generators require. “Get rid of the gearbox, and now you don’t have to change the oil,” says GE engineer Gary Mercer.

Pitch Controller: To maximize lift as the wind speed changes, a controller can automatically rotate each blade anywhere from a fraction of a degree to multiple degrees per second. It can also turn the blades away from dangerously high winds to avoid power overloads or hardware damage.

Blades: Light, stiff carbon fiber replaces fiberglass at critical points in the blades, so they lose pounds and gain strength. A flat (rather than tapered) edge gives them a shape that increases lift.

How to Spin Power

1. Position the Blades Based on data from wind-direction sensors, a yaw-drive motor turns the nacelle to face the wind. A pitch controller rotates each blade around a bearing, setting it to the best angle for the wind speed.

2. Capture the Wind The three-bladed rotor spins in winds from 7 to 70 mph, sweeping twice the area of a football field. A 23-foot-long steel rotor shaft and two roller bearings transfer the mechanical energy to the generator.

3. Turn it into Electricity The shaft spins the generator’s neodymium magnets inside stationary copper coils, inducing current in the coils. Circuitry adjusts the frequencies and voltage of the current and sends it off to the grid. 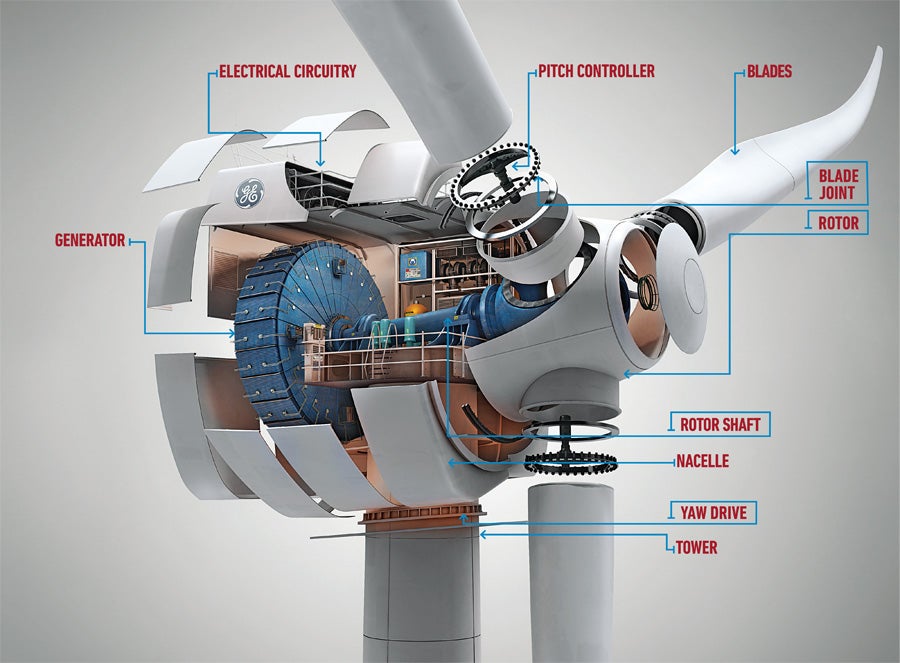