Breaking Blades: The Engineering Lab Where Wind-Power Propellers Get Built To Be Snapped

To demonstrate what the Advanced Structures and Composites Center’s new lab will do to wind blades, Larry Parent, an engineer... 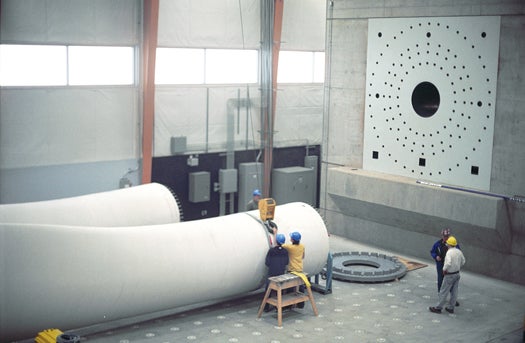 To demonstrate what the Advanced Structures and Composites Center’s new lab will do to wind blades, Larry Parent, an engineer at the University of Maine, takes out his bifocals and begins bending them. The 230-foot-long fiberglass composite blades will suffer greater strain; most will be bent until they begin to break. The Offshore Wind Laboratory is busting blades to design the toughest ones possible, capable of handling the extreme weather conditions 20 miles off the coast, in the Gulf of Maine. Habib Dagher, the facility’s director, says that the Gulf is the future of offshore energy in the U.S.—it opens up to the stormy North Atlantic Ocean and endures consistent class-7 winds (20 to 26 mph). Wind turbines there could generate more energy than those inland, in the wind corridor between Kansas and Texas. The Gulf, Dagher says, is “the Saudi Arabia of wind power.”

To bend a blade, engineers hoist it onto a 15-foot-square concrete wall inlaid with a perforated steel plate, sticking the studded end into the perforations as if plugging a colossal electrical cord into a socket. For one week, engineers attach harnesses to the far end of the blade and use hydraulic actuators and winches to torque it. The ASCC is one of two facilities in the U.S. that stress-test full-size blades, and it’s the only lab where blades for wind turbines are built and broken under the same massive roof. The lab is 37,000 square feet. “We were thinking about having an indoor softball game in here this winter,” Parent says. (A regulation softball field is 38,000 square feet.)

Engineers are now building a 337,000-gallon saltwater immersion tank and wave pool, where they will float 1/50th-scale turbines in the equivalent of 75-foot-high seas and 145mph winds. “We will make not just one perfect storm,” Dagher says, “but many perfect storms.”