How To Fix A Goldfish 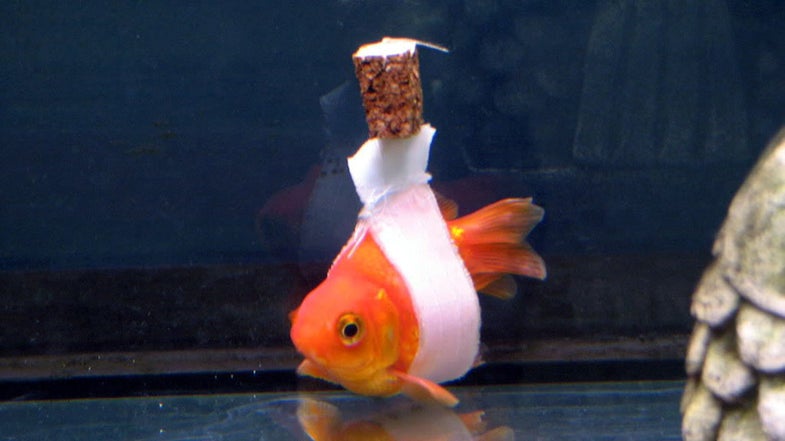 This goldfish has trouble staying upright. Thanks to a sling made from what appears to be a T-shirt tag and a cork, it can now swim right-side up. Reddit user Leability spotted the image and uploaded it recently, noting that he or she is not the fish’s owner. The goldfish and its repair date back to at least 2013, though there’s some evidence of the picture being online before then.

Cork isn’t the only way to repair a goldfish. Here’s video of a goldfish in what appears to be a sling made from straws and pipe cleaners:

In 2009, Lip Stick the goldfish suffered fin rot and an infected bladder, so YouTube user letsbefriendsok made a sling from nylons and a bobber that floats on top of the tank:

Goldfish slings on the Internet date back ever farther than that. In 2003, the resident goldfish at Skyport Diner in Scotia, New York, fell ill. Dick the Fish, reportedly 17 years old, had a team of customers caring for him, including both a sling and a new feeding routine. The AP reported that one customer with a daughter studying veterinary medicine recommended Dick be hand-fed a diet of cooked peas to combat his swim bladder infection. Dick’s trials and triumphs even made it into Field and Stream that year! This is what Dick looked like in his sling.

Despite the heroic efforts, Dick passed away within the year. Such is the fate of any goldfish, even an especially well-cared-for and beloved one.

For a longer-lasting animal prosthetic success story, look to this turtle in Turkey with a titanium jaw. Now that’s a lifesaving action that will be remembered for more than three seconds.