Watch A Pudgy Penguin Wobbling On A Treadmill 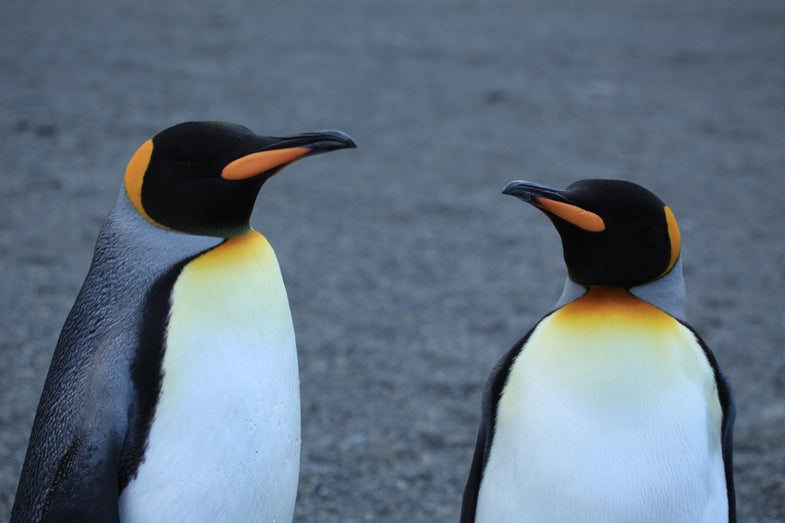 As slimming as a penguin’s tuxedo-like markings are, some of them do have a tendency to gain weight. And with good reason. Male king penguins spend up to a month fasting, and have to eat enough before that to survive and keep their baby penguins safe and fed.

While the additional weight (fish belly?) might be less noticeable in the water, once the penguins are on land, they have to figure out how to deal with the newly-acquired belly fat. Scientists noticed through observations that it seemed like the heavier penguins were falling down more often, but they wanted to figure out why. Were they walking differently?

In a paper published in PLOS One Astrid Willener and colleagues describe how the addition of weight affects how King penguins walk on land. Naturally, to measure this, they needed a penguin-sized treadmill.

No, really. Take a look:

The video is sped up. In reality, the penguin, and its fellow test subjects were walking along at a steady pace of 0.75 miles per hour (1.2 km). Well, most of them were. In an e-mail to Popular Science Willener explained that while about two thirds of of the penguins got the treadmill concept quickly, walking on it immediately, some of the penguins were a bit more stubborn. Instead of walking on the treadmill, they would lean against the box surrounding the treadmill and ‘ski’ on the moving ramp. While a novel experience for the penguins, skiing wasn’t as useful to the study.

While the 10 penguins used in the study all had relatively similar gaits, Willener and her colleagues noticed that the angle at which the heavier penguins leaned was slightly more pronounced, and that they tended to wobble more than their thinner companions.

A wobbly penguin is in more danger from predators on the lookout for easily snatched prey. Luckily for the heavier penguins, they have about a month of dieting to work it all off.