A new bridge concept incorporates wind and solar energy into its design, generating 40 million kilowatt-hours per year — and...

A new bridge concept incorporates wind and solar energy into its design, generating 40 million kilowatt-hours per year — and looking pretty slick to boot.

The Solar Wind concept would use the space between an existing viaduct in southern Italy to install 26 wind turbines, which designers Francesco Colarossi, Giovanna Saracino and Luisa Saracino say could provide 36 million kilowatt hours of electricity every year.

The design team conceived the Solar Wind project for a contest that aims to repurpose some old, unused viaducts near Calabria, a region in the toe of Italy. It would cost about $55 million to demolish the viaducts, so town officials held a contest for proposals that would re-use them in an environmentally friendly way. The wind turbine bridge took second place.

The proposal also includes a solar-paneled roadway to provide another 11.2 million kilowatt hours, Colarossi and colleagues say. It turns the entire viaduct into a park, with spaces to pull over and take in the view off the Italian coast. Travelers could stop and buy fresh produce grown in solar-powered greenhouses located along the bridge. The whole roadway would be covered in a dense grid of solar cells coated in a thin, transparent plastic, the designers say.

All in all, the system would be capable of generating 40 million kWh each year, enough to power 15,000 homes. 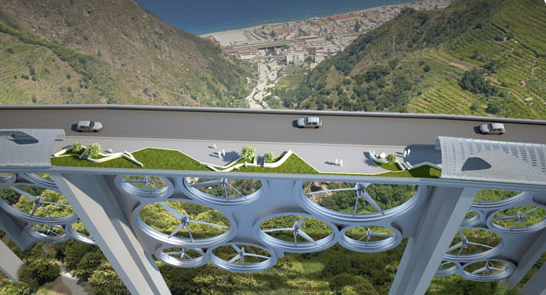