This Wind-Powered Commuter Ferry Is Built Like A Racing Boat 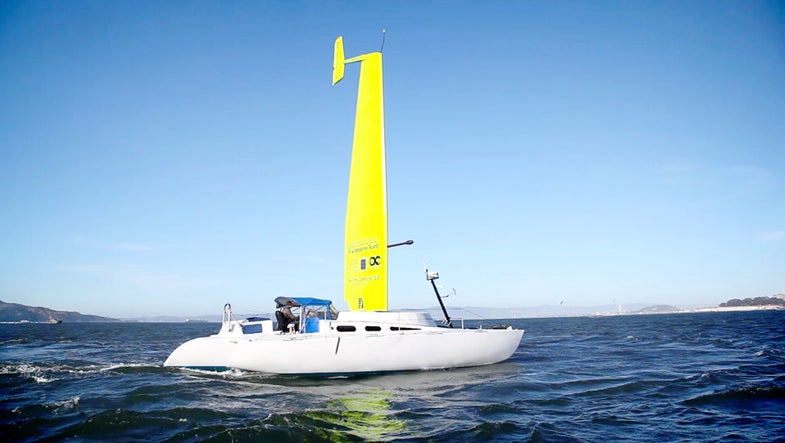 For all their convenience, most commuter ferries are dirty machines. A high-speed one burns 6,600 gallons of fuel a day, on average. Multiply that by the number of passenger boats on a busy waterway, like San Francisco Bay, and you’ve got a lot of spent diesel. “You can drive your Cadillac Escalade across the Golden Gate Bridge and get 19 miles to the gallon and you’d still be far more environmentally correct than to take the ferry system in the way it’s currently operated,” says Jay Gardner, president of Wind+Wing Technologies (WWT) in Napa, California. Gardner claims his company can reduce that diesel consumption by up to 40 percent.

WWT is developing a ferry that makes use of an abundant–and free–natural resource: wind. Instead of relying solely on engine power, specially designed catamarans  will be equipped with vertical carbon-fiber “wing sails” similar to those introduced in the last America’s Cup sailing race. The substantial area of the wings–nearly 3,000 square feet–will catch up to 72,000 pounds of wind force. (WWT is working with nautical engineers to ensure the ferries remain stable by designing interior bulkheads that have textured ribbing, which disperses these large forces over the two hulls of the boats.) The wings will be equipped with GPS systems and vessel data recorders, and powered by photovoltaic cells. Used in conjunction with an electric or clean diesel engine, the wings automatically adjust position to capture the wind, providing additional propulsion.

Unlike traditional cloth sails, the wings require no expertise to operate, which has been a big stumbling block for wind-powered commercial vessels in the past. When ferryboat operators want to disengage the wings, such as during docking or especially windy conditions, they won’t have to fold them down. Instead, crew members can simply set the wings in a neutral position. Even better, the process of using and disengaging the wings is completely autonomous. “The crew doesn’t need to know anything about the wing or how it works,” explains Richard Jenkins, president of Photon Composites, the company constructing the wings. “It’s literally an on-off system.”

WWT plans to outfit custom, 149-passenger ferryboats with two 75-foot-tall wings. Ultimately, the design can be scaled up to carry 500 passengers. And while  $2 million for a pair of wings ain’t cheap, WWT says they would likely pay for themselves in fuel savings in less than two years. The company has already run tests on a smaller 42-foot prototype vessel and is now in talks with public and private investors to service the route between San Francisco and Treasure Island. The project could be live by 2020. Finally, ferryboat travel will be befitting of a modern, environmentally conscious city.

Each wing weighs about 4,000 pounds and is connected to the vessel by a 75-foot spine that turns freely. Three microphones measure audio signals from the wind. A computer then analyzes the readings to determine the wind’s direction.

Based on real-time wind direction, an actuator offsets the thin, outermost piece on the top of the wing by 15 degrees. This action forces the trim tab to move the wing, which provides thrust to the ferry, propelling it forward.

A 200-pound lead beam balances the weight of the wing, making it sensitive to even tiny changes in wind direction.

A nine-square-foot photovoltaic cell generates about 50 watts of power to operate the wind sensor, wing controls, GPS, and communication tools.

Unlike traditional sailboats, these ferries need an interior bulkhead that runs the width of the catamaran. It will evenly disperse the wings’ force on the boat–up to 72,000 pounds–between the two hulls to ensure stability.

This article was originally published in the April 2015 issue of Popular Science, under the title “A Commuter Ferry Built Like A Racing Boat.” It has been expanded for the web.