Next thing you know, they'll be reciting multiplication tables 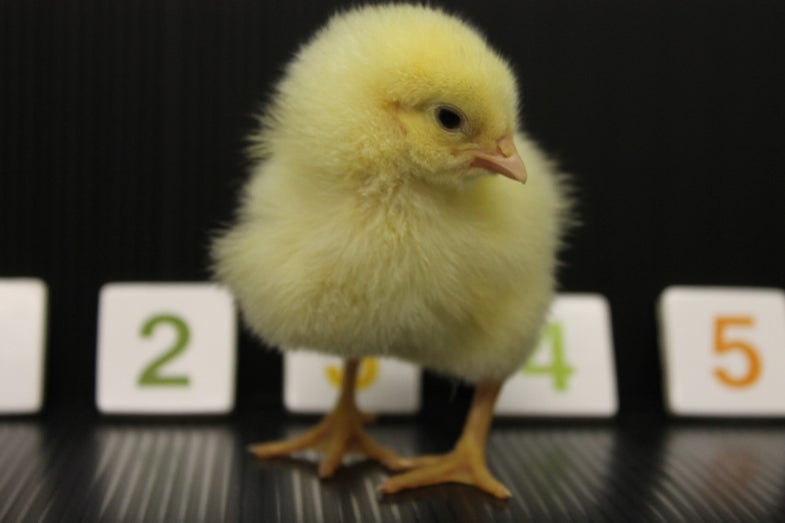 Think about a series of numbers, 1 through 10. Chances are, you imagined the numerals in a line, in increasing order from left to right. That’s the effect of your mental number line, the mental representation of numbers that research has shown basically all humans have—and, it seems, some non-humans, too. To put it another way, human adults tend to imagine numbers as being ordered in space, going a certain direction. It’s a phenomenon that seems to be nearly universal. Pretty cool.

To test chicks’ mental number lines, psychologists in Italy taught the chicks that they could find food behind a card with dots on it. To start, they showed the chicks only single cards, each with five dots. Then the psychologists began putting chicks in little setups where the birds could choose between two cards with some number of dots other than five. Both cards would have the same number of dots. Sometimes the cards would have two dots, while other times, they would have eight. The psychologists found that the chicks were more likely to walk to the left card, if the cards showed two dots. The birds were more likely to walk right if the cards showed eight dots. Voilà! The chicks were associating smaller numbers with the left side, and larger numbers with the right!

The effect worked even when the psychologists used a baseline training number other than five. Chicks trained on 20-dot cards tended to walk left when shown two cards with eight dots on them each.

It’s hard to really read the minds of chicks (ba-dum tshhh!), so it’s possible the chicks were responding to something other than a mental number line. The same is true for other mental-number-line experiments researchers have conducted on nutcracker birds, macaques, and chimpanzees.

If animals do have mental number lines, however, that suggests that the phenomenon arose early in the evolution of vertebrates. And why not? Understanding magnitude is clearly important to survival and there’s strong evidence many animal species count. Maybe they do it just like we do, along a line in space.

The Italian researchers published their work in the journal Science.