This Tiny Sea Snail ‘Flies’ Through The Water Like An Insect 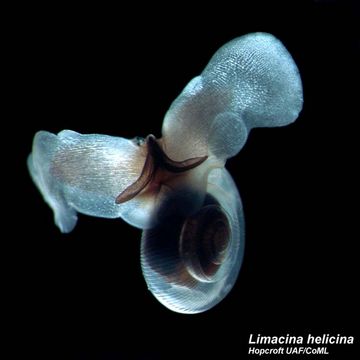 Every night, a hoard of tiny creatures takes part in one of the largest animal migrations, traveling hundreds of meters from the middle depths of the ocean to the surface, to feed and avoid getting eaten. One species of zooplankton that participates in this habitual feat is the 3-millimeter Limacina helicina, more colloquially known as the sea butterfly. Don’t be fooled by the name though, it’s actually a tiny sea snail, or pteropod, with a shell covering about two-thirds of its body. Scientists at Georgia Tech were curious as to how the little snails were able to swim hundreds of meters each night, and so they scooped up a sample from the Pacific Ocean and studied their unique mode of motion with a high-speed camera.

Most small underwater animals would paddle to get around, like how a sea turtle swims. But these little sea butterflies are true to their name: they swim through the ocean much like how insects fly through the air, by flapping their “wings.” The flapping motion produces lift, much like it does for insects in the air, first clapping their wings together, then swiftly flapping them outward. But the snail isn’t exactly the same as a buzzing bee or its namesake butterfly. At each stroke, the snail turns its body to make sure its wings are in the right position to flap, making it travel upwards in a zigzag path.

Watch the sea butterfly in action below:

“Snails evolutionarily diverged from flying insects 550 million years ago,” one of the study authors, Donald Webster, said in a press release. “Hence, it is amazing that marine snails are using the same figure-eight wing pattern that is typical of their very distant airborne relatives.”

Why all this fuss about a tiny sea snail, you ask? Well, they’re actually rather important creatures. Living in cold waters, not only are they eaten by many other creatures such as birds and fish, but their shells also sink down to the ocean floor once the creatures die, adding to the seafloor’s carbon. Plus, better understanding the motions of these tiny creatures could one day lead to new micro underwater robots.

The research was published this week in the Journal of Experimental Biology.