Oil companies look for oil where they think it might be most abundant, so doesn’t it make sense to seek... 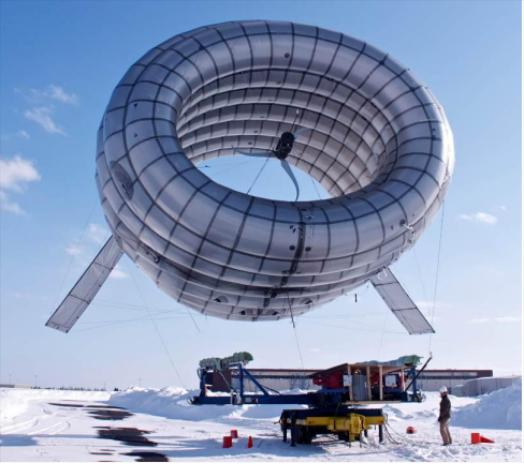 Oil companies look for oil where they think it might be most abundant, so doesn’t it make sense to seek wind power in the places where the wind is most abundant? An MIT spin out called Altaeros Energies seems to think so. Not content to harvest wind energy from atop a static tower just a few hundred feet tall, Altaeros has demonstrated an aerostat wind turbine that can be lofted up 1,000 feet from a trailer, no tower necessary.

Tested last month in Maine, the 35-foot scale prototype of Altaeros’s Airborne Wind Turbine (AWT) was lofted into the air under its own power, via a helium-filled inflatable shell that borrows its design from aerostats. Completing a full automated cycle, it was launched from a towable trailer, climbed to 350 feet, produced power at its apogee, and then descended automatically.

The AWT is actually designed to go much higher, up to 1,000 feet or more where winds are stronger and more consistent. Once up there, it can remain in place for extended periods of time, sending power back to the ground via its tethering cables. It hasn’t completed full testing yet, but its portable and rapidly deployable nature seems well suited to needs ranging from military to humanitarian to the simple need for a quick, temporary source of relatively consistent power anywhere off the grid. See it fly below.