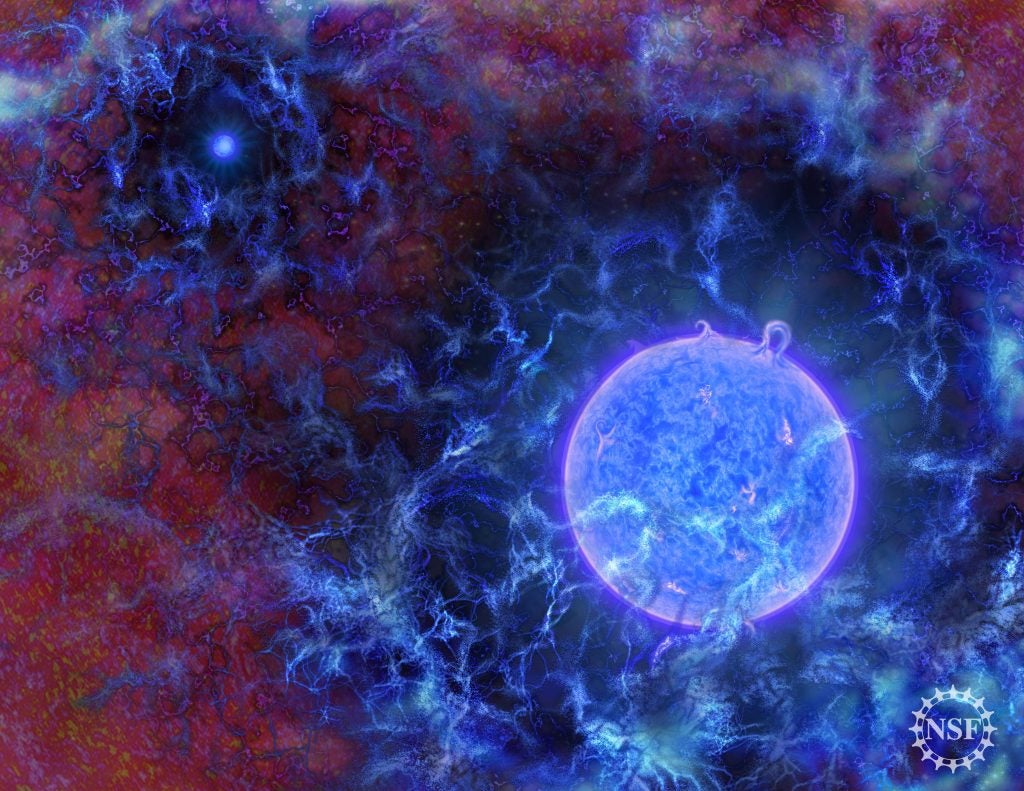 When we look through telescopes, we can see into the past. Light travels fast, but it still takes a lot of time for light from sources spread across the universe to get to our searching eyes. We’ve spotted supermassive black holes from the dawn of the universe, just 800 million years after the big bang. But in a study published this week in Nature, researchers were able to look back even farther than that—180 million years after the big bang—when the very first stars were forming.

“What’s happening in this period,” Alan Rogers, an astronomer at MIT’s Haystack Observatory, said in a press release, “is that some of the radiation from the very first stars is starting to allow hydrogen to be seen. It’s causing hydrogen to start absorbing the background radiation, so you start seeing it in silhouette, at particular radio frequencies. This is the first real signal that stars are starting to form, and starting to affect the medium around them.”

The researchers think it’s unlikely we’ll see further back into the history of stars anytime soon, but they will keep looking for other information about the infancy of the universe, including why the hydrogen gas appears to be colder than expected. A lot colder. Another paper in Nature suggests that this might be due to the presence of dark matter, a fascinating possibility that other researchers are eagar to investigate.

With all the other news going on in the world this week, there’s a chance you didn’t have much space for space. But there was a whole universe of stuff going on. Here are a few other stories you might have missed:

There was a lot of lunar news this week. We already knew that there was water on the Moon and that some of it was probably pretty difficult to get to. A new study published in Nature Geoscience found that the water might be even more widespread than we thought, spread out across geographical regions, but also concluded that the water might be pretty immobile. Researchers are interested in understanding more about the Moon’s water reserves because water is a valuable resource for future expeditions—great to use for drinking, sure, but also for breaking down into oxygen (for breathing) and hydrogen (for fueling up rockets).

Water on the Moon also tells us something about our natural satellite’s development. A paper published in Earth and Planetary Science Letters used models to mimic theories about how the Moon might have formed. They found that having widespread water on the moon was still consistent with the leading hypothesis, which is that another planet-sized object collided with the early Earth. The impact sent material flying into space, which eventually coalesced into our Moon.

That little blip was the thermal energy from the rocket carrying GOES-S, NASA and NOAA’s latest satellite. It will monitor severe weather across the United States, and was imaged by its immediate predecessor, GOES-16, which also caught the exhaust from the launch.

See that little wisp heading through the clouds near Cape Canaveral? Yep, that’s it again! Both images were made possible by an instrument called the Advanced Baseline Imager. Read more about the technology that lets this satellite monitor and forecast disasters here.

And last but not least, there’s a space robot in the news. The Crew Interactive Mobile CompanioN (CIMON) will head to the ISS in June. The 11-pound companion equipped with IBM’s Watson technology will follow around the ISS astronauts and help them… wait, what will a round, disembodied ball with a smiley face on it do, exactly?

According to IBM’s blog, “together they will experiment with crystals, solve the Rubik magic cube based on videos, and conduct a complex medical experiment using CIMON as an ‘intelligent’ flying camera.”

Hopefully it works out better than the last robonaut. Robonaut 2, broken since 2015, is packaged up on the ISS and awaiting an unceremonious return to Earth.