Ice technicians are the secret stars of the Winter Olympics 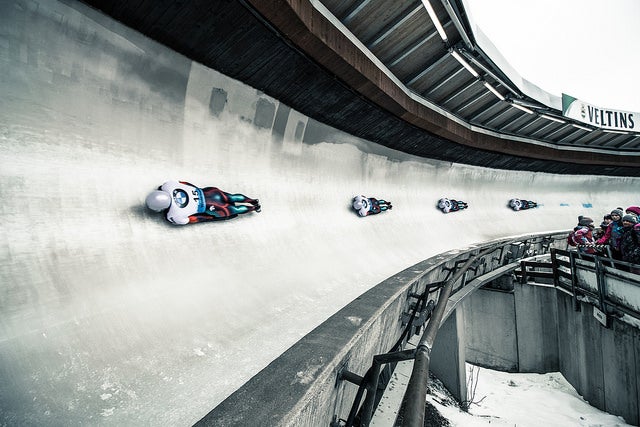 The emphasis of this year’s two-week-long Winter Olympic Games has been placed squarely on the Olympians themselves. After all, the stated purpose of the international competition is to bring together the world’s greatest athletes in a nail-biting competition across 15 different winter sports.

But before the curlers, skiers, and skaters even arrived in Pyeongchang, South Korea, the Olympians of the ice technician world were already a few weeks deep in a competition of their own. Mark Callan of the World Curling Federation and Markus Aschauer of the International Bobsleigh and Skeleton Federation both say they’re hoping to make the best ice the Winter Olympics have ever seen.

To transform the barren concrete jungle of existing tracks and arenas into an ice- and snow-covered wonderland is an enormous undertaking. And it takes a keen understanding of the physics and chemistry that keeps frozen precipitation pristine.

Callan has been making and maintaining ice for more than 25 years. The Pyeongchang event will be his second Olympic Games as the official ice technician for the World Curling Federation. He arrived at the arena two weeks before the games began in order to start preparing the ice.

“At the [beginning], we have effectively a concrete floor,” he says. “We start by cooling the concrete until we get it… around 23 degrees Fahrenheit and then we start to spray water on it to build ice up.”

But it’s not just any water—after all, this is the Olympics. Callan says the surface of the curling ice has to be totally even, or else the stones don’t slide correctly. “In a normal tap or city water, you’ll have fluoride or chlorine and other such chemicals,” he says. “During the freezing process… these chemicals pool so you get a little dent in the water, a little ripple. So to try and counteract that, we use treated water.” Callan’s team runs the tap through a reverse osmosis and a deionization system. Both processes remove ions and molecules suspended in the water. This ensures only the purest H2O pours out onto the concrete court.

After the ice is layered on, the technicians, in true Alice and Wonderland fashion, literally paint the ice to give it that shine you see on TV. Then, they layer on the game-specific markings, like those big bullseyes. When everything else is finished, Callan’s team sprays small droplets of water across the hardened surface; that way, there’s something lubricating the granite stones as they shuffle across.

But this prep work is the easiest part. Maintaining a consistent chill is where the real challenge lies. “There’s lots of different issues that can arise,” Callan says. Number one? Body heat. “We have up to 3,200 people appearing in the building for every game and then at the end of it, they all clear out, and a couple hours later we have to start again,” he says. “The building goes through a big swing in terms of its environmental position.” When the building is empty save for the ice and maintenance crew, air stops moving. But the moment the crowds return—opening doors and bringing their body heat in with them—the entire facility starts to warm.

Coolers in the floor mean the ice won’t totally melt, but this skyrocketing temperature can have a more insidious effect. “The biggest enemy we have in any curling event is frost,” Callan says. Frost forms when water vapor in the air settles on a surface in the form of ice. But these little chips are nothing like the pristine ice sheets Callan carefully curates. Rather, they’re just one other way of disrupting the perfectly smooth surface of the play field. “If you get frost on the ice,” Callan says, “the stones don’t run very well. They stop very quickly and they curl very unevenly.” Fortunately, the dehumidifiers in the building are typically strong enough to maintain the arena’s equilibrium.

Other indoor sports like skating and hockey require similar setups. But Callan says there’s one crucial difference. “Because a figure skater or a hockey skater [is] powered,” Callan says, “they don’t notice those small differences in the surfaces.” While ice maintenance teams are still careful to create even sheets of ice for these competitions, Callan says, the ice isn’t as high stakes as it is in curling, where even a slight divot can totally disrupt the surface.

Still, maintaining ice for bladed sports like these requires a lot of time and energy. Each time an athlete marrs the surface, technicians have to do their best to patch it on the spot.

For still other sports like bobsleigh, luge, and skeleton, which take place in open-air but roofed facilities, things are a little different. The ice and snow is still made artificially (even if there’s snow and ice already on the ground), but it takes a different strategy to maintain.

Markus Aschauer of the International Bobsleigh and Skeleton Federation is leading the ice technician team for these three sports at Pyeongchang. Similar to Callan, Aschauer’s team began with a snaking concrete track, which they then cooled and filled with smooth sheets of ice. But unlike a single curling arena floor with one centralized cooling system, this track, which looks like a rollercoaster without cars, is set up in pieces. “The track is in many sections,” he says. “There are some sunny spots or some shady spots.”

Aschauer and his team must try to reach a consistent temperature for the entire track. A good spot is around 26 to 28 degrees Fahrenheit—a fairly narrow set of parameters to place on nature. If the ice is too warm, it starts to frost or even melt. But if it’s too cold, Aschauer says, “that makes the ice very hard, like glass, and the ice is cracking.”

As with skate sports, Aschauer’s pristine surfaces must cope with immense wear and tear. In this case, three different sports—luge, bobsleigh, and skeleton—use the same track and affect it in different ways. The four-man bobsleigh, for example, weighs almost 1,400 pounds. Given it also has an elaborate break system, the sleighs can easily take chunks right out of the icy track.

“It’s very challenging for the ice crew during the games, it’s a very tight ice schedule,” Aschauer says. “During these three weekends, all of the disciplines are on the tracks many, many times.” To keep things slick, the ice technicians have to spray down the track, which is about 6,200 feet long, as much as five times a day. Each individual “spritzing” requires about 290 gallons of water.

What to watch for

Callan, Aschauer, and their colleagues rely on time-honed recipes to keep Olympic ice pristine. But their process isn’t totally frozen in history.

This year, Callan says, they won’t paint the curling markers on as they have been in the past. Instead, his team will lay out a thin skin on the surface of the ice with the colorful bullseye already in it. This process, which mimics screen-printing a t-shirt, will hopefully save the federation money and Callan time.

And the curling ice team will have to account for an entirely new sport. This year, instead of just men’s curling and women’s curling, the Olympics will also include mixed doubles curling. Because the mixed doubles teams move less, the ice droplets scattered on the curling surface will be sprayed out of a slightly smaller nozzle. “The water droplets for the men’s and women’s will be slightly bigger in size, so they can take more sweeping and sliding,” Callan says.

In recent years, ice technicians have also increased their reliance on smart technologies to monitor their icy facilities from afar. While Callan still works 14 hours a day for most of the Olympics, if he heads out for lunch between competitions, he can now monitor the temperature of the ice from his phone.

But perhaps the most relevant change, at least for viewers at home, is an aesthetic one. “It has to look sharp on TV,” Callan says, “bearing in mind a lot of the TV providers are going to shoot them in high-definition.”

Note: this article previously misstated the length of the bobsleigh track. It is about 1,900 meters or 6,233 feet.