Figure skaters have to train themselves to ignore their natural reflexes

Brain areas that control movement have to learn new tricks. 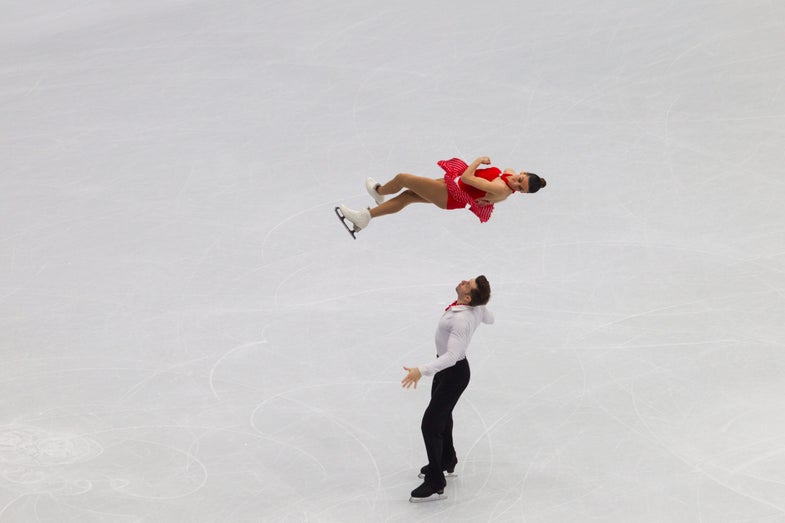 This Monday, the American Olympic figure skating team won a bronze medal partly thanks to Adam Rippon’s dazzling performance in the men’s free skate portion of the event. His routine wasn’t the most challenging, allowing two skaters who fell during the competition to outscore him. But its near-flawless execution still captivated audiences.

Even performances without the sport’s most acrobatic moves are pretty stunning to watch. Figure skaters don’t look as though they obey the same laws of physics as the rest of us. In fact, their skills flummox even scientists who study how the brain controls balance and complex movements. “I see it on TV, and I can’t turn it off,” says Rui Costa, a neuroscientist at Columbia University’s Zuckerman Institute. “You sit there and you’re like, ‘no way!’”

He and his colleagues have a few ideas about what’s happening in the brains of these elite athletes, though.

Before a figure skater can glide across the ice, his brain must learn to overcome its natural skittishness toward moving about on slippery terrain. “You’re on this strange surface and you have to learn rules for balance that are very different and more extreme than in normal cases,” says Nate Sawtell, also a neuroscientist at the Zuckerman Institute. “The margin for error is so slim.”

When most of us step onto a rink, we slip and start to tilt backwards. “We feel as if we’re falling and we rapidly, hopefully, correct that falling backward by pitching forward and stabilizing ourselves,” Sawtell says. These reflexes are controlled by a part of the brain called the cerebellum. When it receives signals from the inner ear telling it that our heads are not upright, the cerebellum issues motor commands to our muscles to jerk our bodies back up.

“These reflexes…are there for good reason to protect us, but then in the context of acrobatics and figure skating are not adaptive,” Sawtell says. “A figure skater is somehow able to make those kinds of movements on purpose, [seemingly] effortlessly and without the reflexes that would normally put them back in an upright posture. So the question is, how are they able to do that?”

Sawtell studies how the brain learns to recognize sounds or feelings related to the body’s own movements and then tune these sensations out. He and his team have found that an area of the brain called the dorsal cochlear nucleus can act like a pair of noise-cancelling headphones in mice, keeping them from being distracted by the sounds they make while licking a waterspout. This brain region receives auditory messages from the inner ear as well as copies of motor commands issued by other parts of the brain. If the sounds it receives were created by the mouse lapping water, its neurons stay quiet. That indicates that it uses information about the rodent’s own actions to cancel out any noises they might cause.

When a figure skater learns a new move, a similar kind of process happens in their cerebellum, Sawtell says. Their brain learns to expect that when he tilts backwards on purpose it will be accompanied by a falling sensation.

“Copies of those motor commands could go to the cerebellum, and that’s what would indicates to the cerebellum that this movement was being done on purpose,” Sawtell says. “In the context of slipping on ice there’s no motor command coming from higher centers…there’s just the sensory information telling you you’re slipping, you better do something about it.”

With practice, the brain will dampen that feeling so the skater doesn’t reflexively jolt upright. “You don’t actually fall, so the brain learns over time that it’s okay, that you’re going to survive this,” Sawtell says.

Eventually, a figure skater will learn to leap and twirl without balking, and even perform these maneuvers seamlessly one after another. These points of transition are where skaters often fall. “But with practice you kind of link together all those individual movements as if they were one,” Costa says.

He investigates how the brain learns to put complex movements together. He’s measured brain activity in people as they play the piano. Before each key press, there’s a burst of activity in the motor cortex and basal ganglia, which help initiate and control motion. As people learn a new melody, the spike in activity preceding each note disappears, until it only happens before the first and last note.

By the time a figure skater steps into the rink to compete, their brain doesn’t need to plan every tiny motion; the burst of activity initiating movement might come at the beginning of the routine instead of before each element, Costa says.

A process called chunking helps them link their movements together. It’s similar to how we recall phone numbers by splitting them into groups of three of four digits to make them more manageable. Basically, instructions for each piece of the intricate maneuvers the skater will perform come from different parts of the motor cortex. The basal ganglia receives these signals. If they occur in the same order, over and over again, it begins to group them so that doing the first will trigger the rest automatically. Over time, it cements a series of jumps, spins, and steps together into whole routines.

Sometimes, a skater will falter on one of these elements. “When things go wrong they can go terribly wrong,” Costa says. “But sometimes they just go a little bit wrong and the jump is not exactly perfect and they still manage to get back on track within a few milliseconds.”

Some part of the brain is paying close attention to how well each of these moves are executed. Scientists don’t really understand how this happens or what parts of the brain are involved, though. “How does your brain go backwards in time and figure out exactly what was the cause of the problem?” Sawtell wonders. “How does it compute the right kind of error signal and then use that to actually fix the movement?”

Also a mystery is how the brains of figure skaters might differ from everyone else’s. Learning depends on our brain’s ability to strengthen the connections between different neurons. But the fine-scale changes that happen when a skater learns how to do a double axel or Biellmann spin are not ones we have the technology to observe noninvasively.

However, if we were to peek at the brains of figure skaters with fMRI—an imaging technique that measures changes in bloodflow—we might see some distinctive behavior. When scientists have imaged the brains of people while they play video or memory games, they have seen synchronized bursts of activity in different regions. In figure skaters, there’d likely be a lot of related activity between the motor cortex and basal ganglia, Costa says.

“It would be great to know what goes on in the brain of figure skaters,” he says. However, “We don’t directly study figure skating because of the complexity.” Instead, neuroscientists study simpler versions of their mind-bending feats.

That’s because figure skating is an extreme showcase of skills that humans have a superior affinity for to begin with. “Human beings would be some of the animals that are most amazing at learning motor skills,” Sawtell says. While Mirai Nagasu’s triple axel is freakishly difficult to land, even everyday movements like picking up a glass or climbing a ladder are pretty complicated.

“People try hard to get robots to do coordinated things and to play soccer, and the results are much worse than any second grade or even kindergarten team probably,” Sawtell says. “So that speaks to how difficult a problem movement is.”