Everything Americans know about science in seven graphs

See how the country stacked up in a recent National Science Foundation quiz. 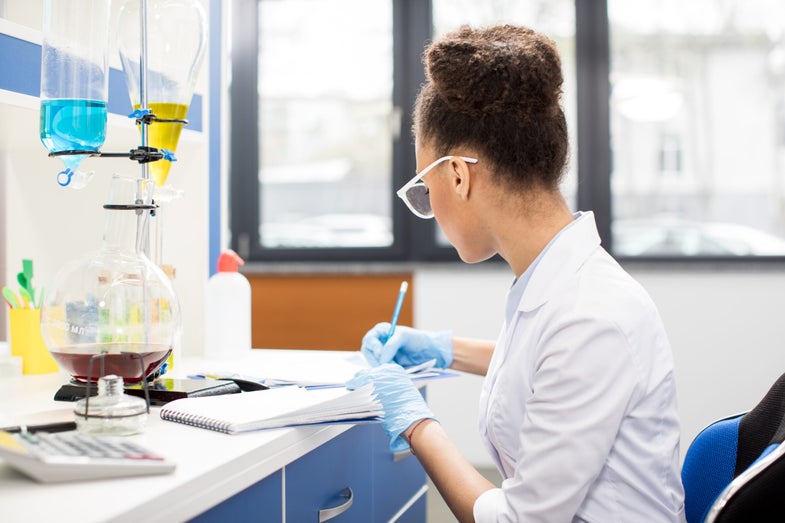 Every two years, a couple thousand lucky Americans get to take a science quiz. The National Science Foundation surveys the representative sample to see how much they (and, by extension, we) all understand about science and technology. And it’s not just for fun. The NSF has a vested interest in figuring out what Americans know, think, and understand about the scientific world so they can construct policies in line with our collective reasoning. So once it’s collected, this survey data gets compiled and put it into one big report.

Of course, no survey can perfectly capture how well a person understands science. A few questions can’t distill that kind of information; scientific literacy is less about memorizing specific facts than it is understanding how to interpret evidence. But these tests can help us get a snapshot of what Americans do know, and how our understanding is changing.

Here’s how we did: 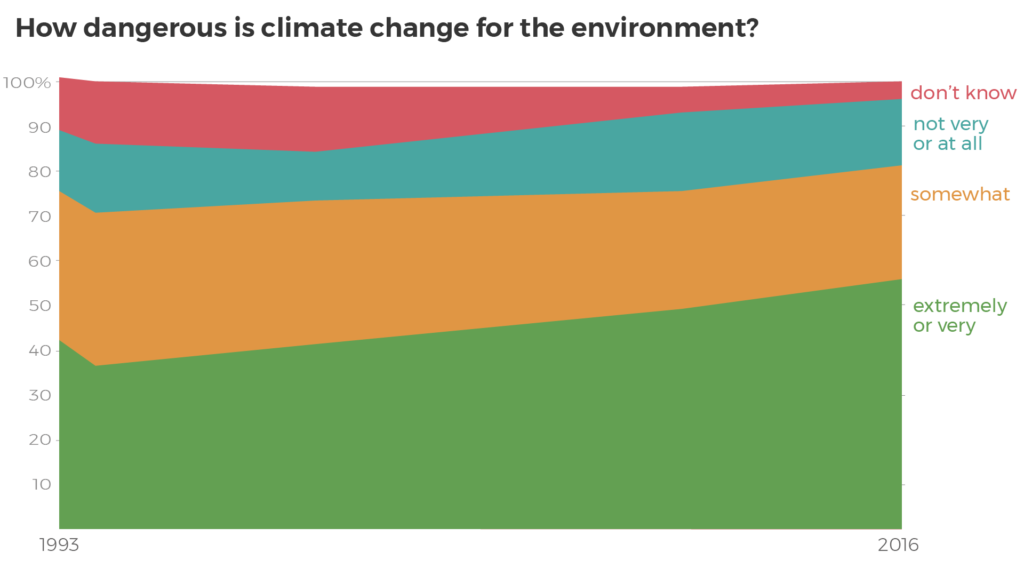 More Americans than ever think climate change poses a real threat to the environment, though the proportion who feel it’s not that bad has stayed around 15 percent. It seems to be the undecided who have come around, not the outright deniers. And unfortunately, the survey also found that only 6 in 10 think global warming is caused by humans—though on the bright side, that’s the highest number ever. 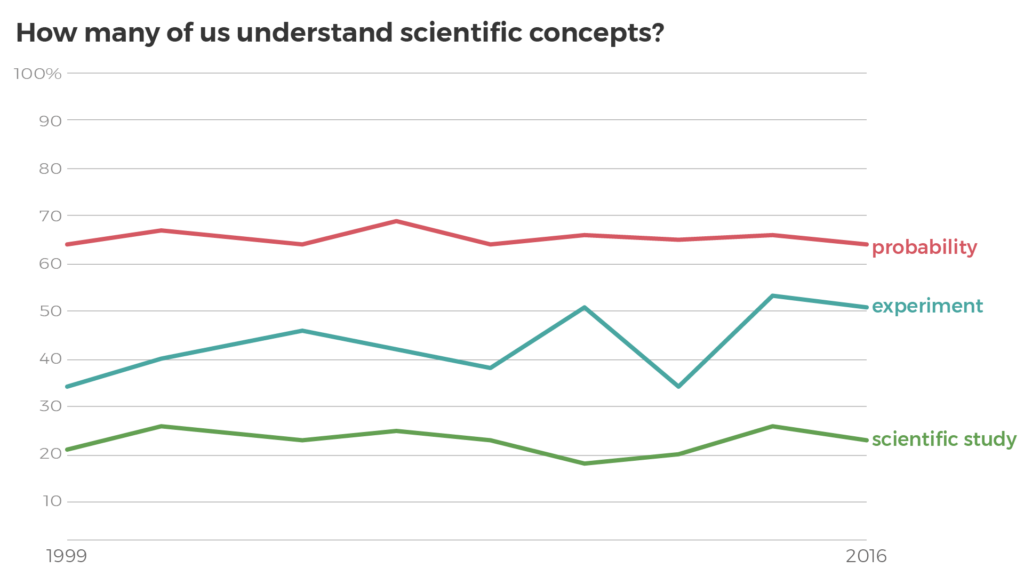 Testing “understanding” of scientific concepts requires some careful finagling. We’ll let you be the judge of how well NSF did. Here are the two-part questions used, which respondents had to get entirely right to receive credit:

(2) Why is it better to test the drug this way?

Answer: The second way, because a control group is used for comparison. 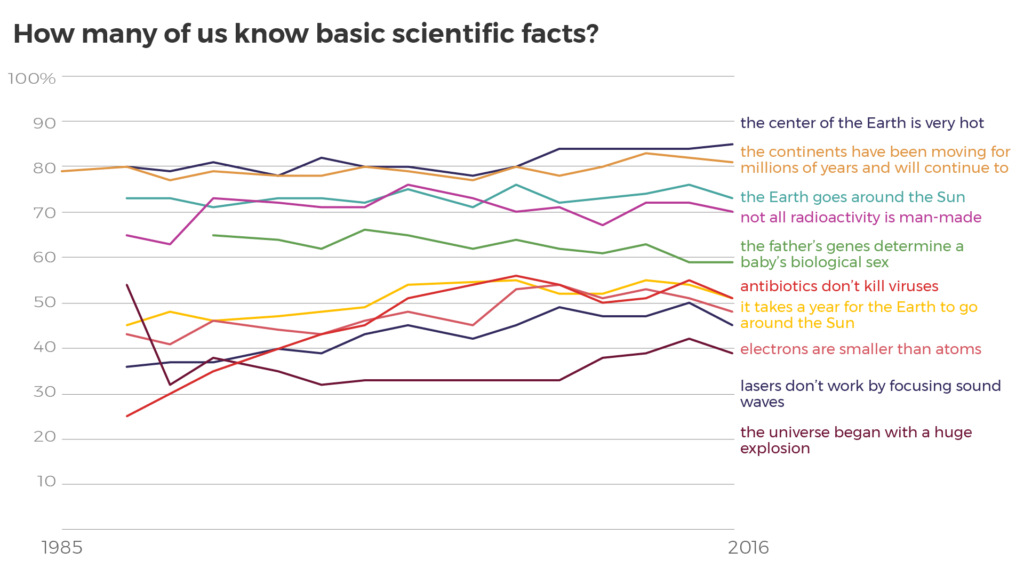 Despite the wayward influence of Journey to the Center of the Earth, apparently the best-known fact is that the center of the Earth is hot (far too hot to be hospitable, at least). We also seem well-versed in plate tectonics, and about 3 in 4 Americans have figured out that the Earth goes around the Sun. But only 1 in 2 know that it takes a year.

Not included here are the questions about evolution and the big bang. The NSF found a small change in those questions had a huge impact on the answers. Adding “according to the theory of evolution” or “according to astronomers” increased the proportion answering correctly to each question. A 2016 study found a similar phenomenon, but substituting a question asking about elephant evolution rather than human—people seemed to understand elephant origins better than human ones. And that suggests that it’s not that people can’t or don’t grasp the theory of evolution, it’s that sometimes scientific principles conflict with a person’s beliefs—and sometimes the beliefs win out. 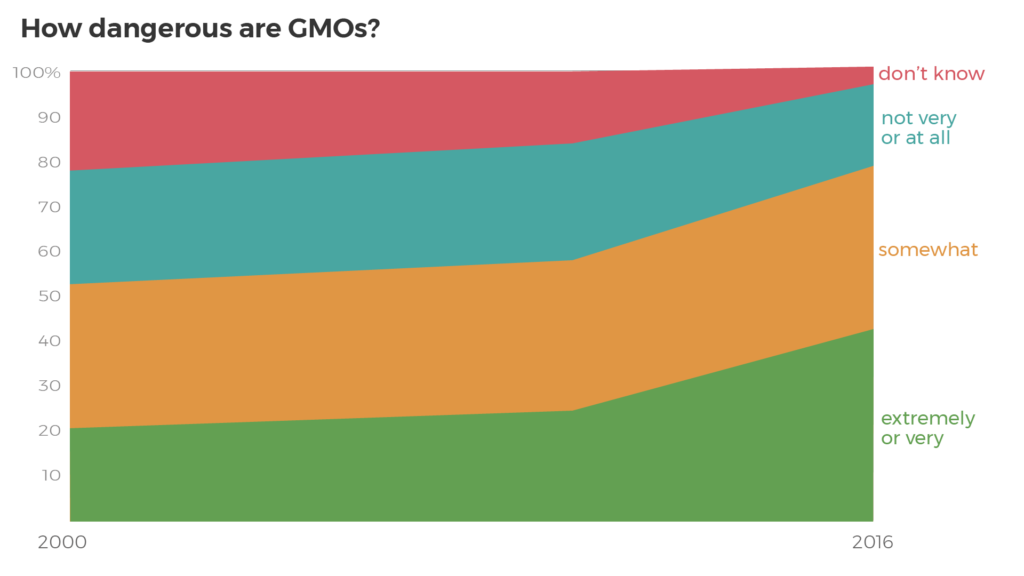 Concern over genetically modified food is on the rise, despite the fact that 88 percent of National Academies of Science, Engineering, and Medicine members think they’re safe. Other surveys suggest the public isn’t well-informed about the actual technology involved in creating these crops, which means views are shaped by general perception and worldview rather than scientific evidence. 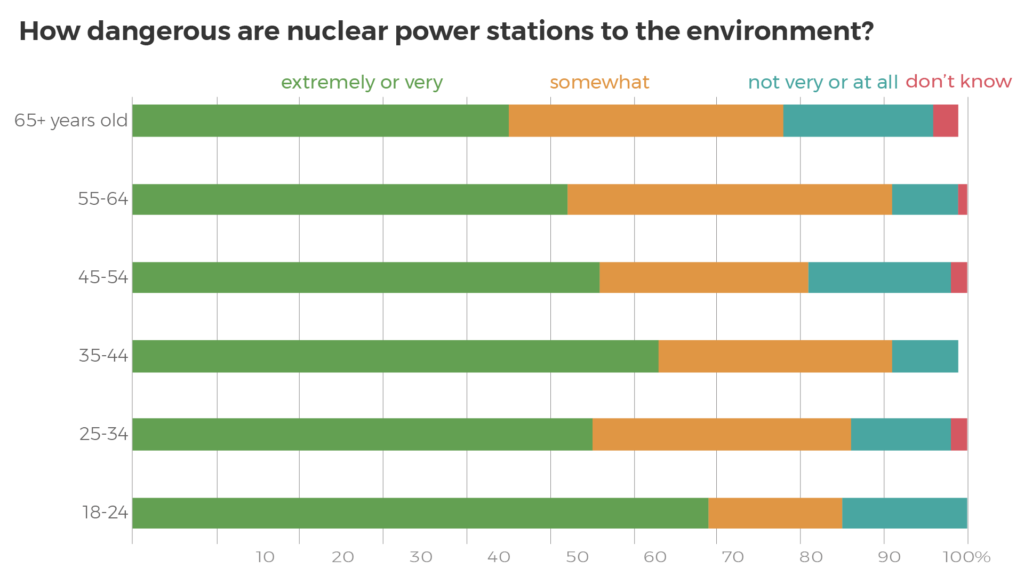 The younger you are, the more you think nuclear power stations harm the environment. Accordingly, fewer and fewer Americans support using nuclear energy, though 30 percent still want to prioritize fossil fuel development over alternative energy. Oddly, Gallup data suggests that the nuclear accident at Fukushima didn’t change perspectives much, which could mean that other factors—like “energy prices and perceived abundance of energy sources”—are a bigger priority than safety. 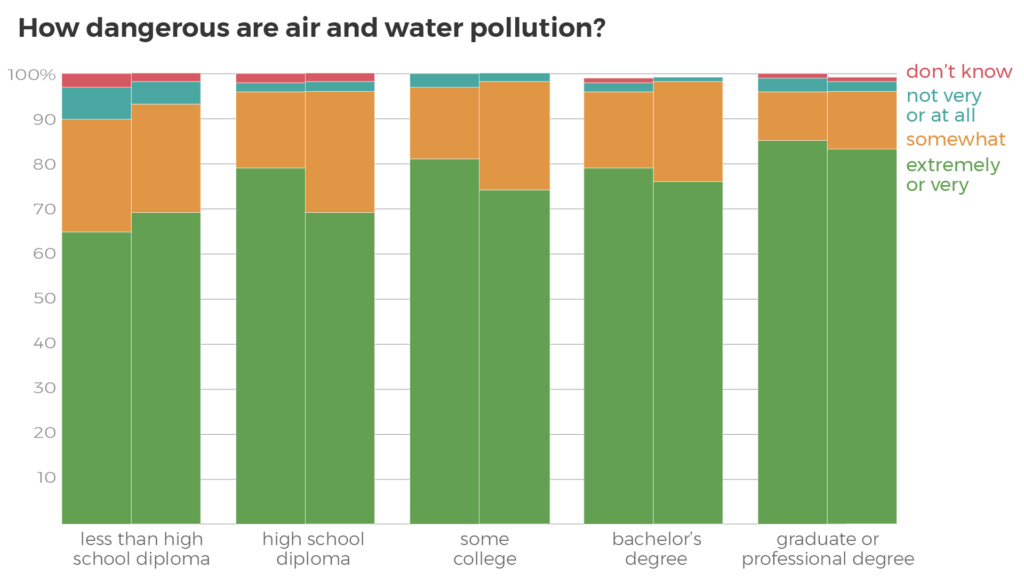 Education doesn’t have much of an impact on understanding that water and air pollution are dangerous. And really, why would it? The vast majority of people, including adults who dropped out of high school, think that both forms of environmental damage are dangerous (though apparently a graduate degree teaches you to feel it’s more extreme danger). 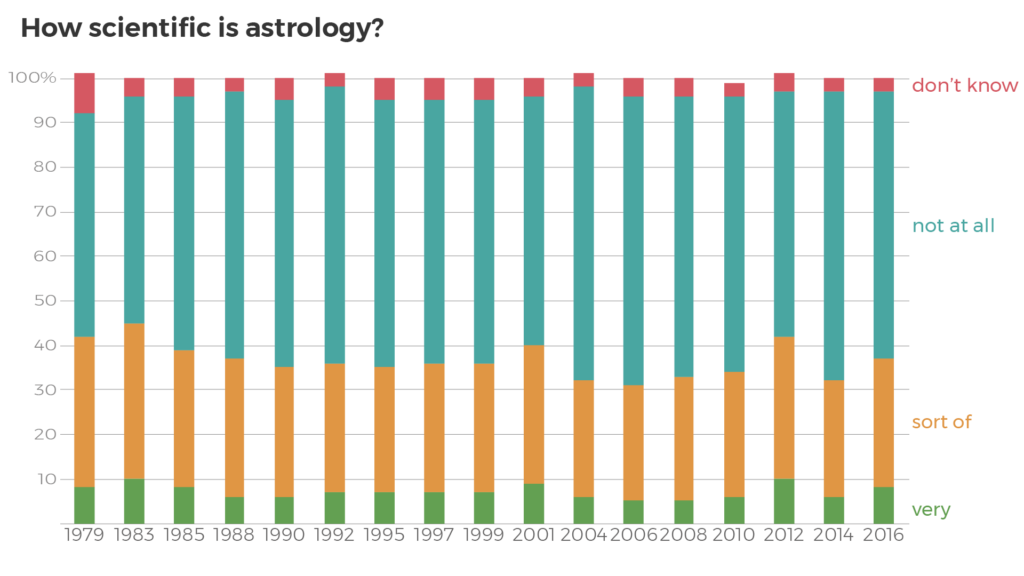 Americans have been waffling about astrology for as long as the NSF has been asking about it. There is, for the record, no true scientific basis for astrology, though there is plenty of evidence that horoscopes only feel like they’re accurate, even when they aren’t. Seminal research from the ’70s and ’80s showed that horoscopes are so general that everyone will identify the same personality description as their own, as long as it’s labeled with their astrological sign. Take away that Libra title at the top, and your previously perfect personality description will suddenly feel alien.