How do I find a meteorite? 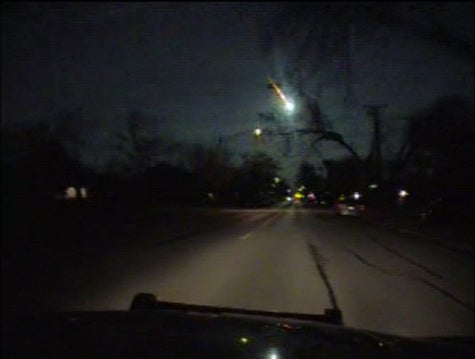 Monday's meteor streaks over Michigan and gets caught on camera by a police dashcam. Morton Grove Police Department
SHARE

A massive flash of light illuminated the skies above Illinois and Wisconsin early on Monday morning. It blazed a Northeasterly path bright enough for folks to spot from New York to Minnesota before falling into Lake Michigan.

You’re probably picturing a steaming rock, hissing briefly as it hit the chilly surface of the Great Lake. But you’d be wrong. “That was completely made up in Hollywood,” says Mike Hankey, Operations Manager and meteorite hunter at the American Meteor Society. “It’s literally cold when you first touch it.” He would know—he’s been tracking down meteorites for years with the AMS and has found many a meteorite chunk. “Everyone always writes in saying they know they’ve found a meteorite because it was hot,” he says. “Nope, definitely not.”

It’s true that when you see the flash of a meteor in the sky, it’s literally white-hot. But it’s not burning up. Meteors and meteorites (which is what a meteor is called if it hits the ground) glow because the air in front of them gets compressed and heats up, which in turn heats the meteorite itself. And almost all solid materials glow when they get above 977 degrees. That’s called the Draper point, after the first president of the American Chemical Society who discovered the phenomenon in 1847. Incandescent light bulbs work by the same principle: a wire filament inside the bulb is heated to the Draper point and emits visible light. Meteorites can get above 3000 degrees, which is plenty hot enough to produce a bright light.

All that intense heat vaporizes part of the meteor. Between that and the friction from the atmosphere, the rock breaks up miles above the ground. As it slows and comes apart, it enters what’s poetically known as “dark flight.” The meteor fragments cool and slow down, carried along by the wind—flying almost invisibly. By the time a meteorite hits the ground, it’s at ambient temperature.

Monday’s meteorite was unexpected. Meteor showers happen periodically as the Earth’s orbit takes it through clouds of debris from comet tails. Sporadic meteors like this one break off from asteroids. There are plenty of meteors in our patch of sky every day, but most fall over remote regions of the world or in daylight, when they’re usually too dim to see. Sunday’s was unusually large and bright—if it hadn’t landed in Lake Michigan, it probably would have been one of the few each year that produces a fallout large enough to scatter individual meteorite pieces for hunters to find. It landed pretty close to shore, but given the whole dark flight thing and the fact that it was about 1 a.m., it’s not like anyone saw the meteorites hit the water. We know where it landed because the AMS gathers enough data to find it on Doppler radar.

It was Hankey’s idea to have the AMS host a citizen science site to report meteor sightings. To track a meteor, he explains, you normally have to interview witnesses or have videos, or both. That means you have to go to people’s houses and then try to measure the angle at which they would have seen the meteor, but all of that is fairly imprecise. Instead, Hankey thought, you could make an app for people to report their sightings right away. Hankey is a software developer professionally—he just works with the AMS out of sheer love of meteorites—so he was in an ideal position to make that idea a reality.

And the system works. “We can get really precise trajectories,” Hankey says, which is all the more impressive when you realize that this is not a subset of dedicated citizen scientists reporting findings. It’s random people. “It’s involuntary citizen science,” Hankey says, “When you have events like this, it’s once in a lifetime. For 99 percent of people, it’s the first fireball they’ve seen.”

But he says “the beauty of Google” is that basically everyone immediately goes on the internet and searches for more info on what they just saw. “You can’t not be captivated by it. It’s the type of thing that really gets your mind going.” So, Hankey says, people type in things like “I just saw a bright light in the sky,” and the AMS site comes up. Right on the homepage, there’s a button that says “Report a Fireball.” They got 222 reports on last night’s meteor, which they used to plot the trajectory.

Based on that trajectory and their knowledge of exactly when the meteor fell, they could go look at the Doppler radar data that NOAA and other government agencies gather and look for a cloud. Not a literal cloud, but a radar cloud produced by the falling meteorite pieces. Since the Doppler info was collected far above the ground surface, it can’t be used to determine the precise location of the fallout, but it can get within one kilometer.

Sometimes, if they have enough data, astronomers can figure out where the meteor came from in space. The massive meteor that hit Chelybinsk, Russia in 2013 was captured on so many cameras that researchers could backtrack and figure out the meteor’s original orbit.

This whole system is basically dependent on people’s sense of wonder. In fact, the entire AMS was founded on it. In 1911, Charles Olivier wanted a way to collect observations of meteors and meteor showers, so he created the AMS as an offshoot from the American Astronomical Society. Hankey says people used to mail in letters describing their observations for the AMS to collect, and the tradition carries on today.

Lots of people send in photos thinking that they’ve found a meteorite. But more often than not, it’s just a heavy black rock. Real meteorites take practice to find. The stereotype of heavy and black is right, Hankey says. Meteorites have embedded metals in them that Earth rocks don’t, so they’re unusually heavy, and they’re definitely black. “With a new fall, it’s so black—blacker than anything you’ve ever seen,” he says. They’re also aerodynamically shaped from their descent. Still, lots of people hoping that they’ve found a little piece of space in their backyards are sadly mistaken. “It takes training and holding a lot of real meteorites. And finding a lot of false meteorites. And having your heart broken,” Hankey says. “I’ve broken a lot of hearts.”

(GIF made from footage courtesy of Space Science and Engineering Center (SSEC) and Department of Atmospheric and Oceanic Sciences, University of Wisconsin-Madison)