What can NASA’s twin study results actually tell us? 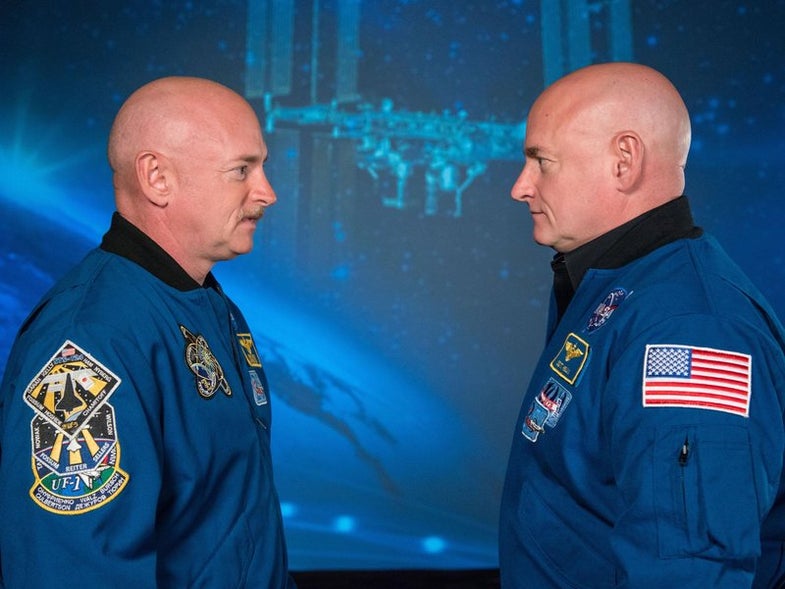 Scott and Mark Kelly—NASA astronauts and identical twins—have given countless blood and saliva samples this past year as part of NASA’s first twin study. According to the first findings announced by NASA, there certainly are differences between the twins’ DNA. But understanding what those differences might mean is a long way off.

Identical twins are like gold to scientists. Because they are born with essentially the same exact genes, researchers use them to understand how the environment interacts with and changes our DNA. But having identical twins that were both astronauts was pure luck for NASA.

Between 2015 and 2016, Scott Kelly spent nearly an entire year—340 days, to be exact—in zero G aboard the International Space Station. Meanwhile his twin brother, Mark, stayed within Earth’s gravitational limits (though he did spend 54 days in space between 2001 and 2011). To understand what a year in space does to your body, NASA researchers began studying the twins while Scott was in space—and never stopped.

First, the differences: After parsing through the data, the researchers found that the lengths of Scott’s telomeres (essentially caps that sit at the end of a person’s DNA) grew slightly longer while he was in space, but returned to more normal levels shortly after his return. Mark’s telomeres got shorter. There were also some changes in both twins’ DNA. The number of methylated DNA—methyl groups added to DNA sequences that change the activity of the DNA segment without changing its sequence—decreased for Scott while he was in space and increased for Mark while he remained on Earth.

But the real question is what to make of these changes. As Nature reports, it’s quite normal for DNA methylation levels to return to normal once astronauts come back to Earth, because they go through rapid changes in diet (no more freeze-dried meals) and sleep behaviors (in a bed, supported by gravity). But scientists don’t yet understand why the twins’ telomere lengths changed, and what effect that will have on their respective health.

The next step is to figure out which changes can be attributed to spaceflight and which are just normal consequences of aging. Figuring that out will almost certainly take more than one set of identical twins. If you want to assume that a study’s findings can be applied to the general population, you need to conduct that study on a large, diverse group of people. In statistics, the higher the sample size (known as n or number of people in a study) is, the more likely the conclusions that come out of it are going to be statistically significant, meaning they can’t be attributed to chance alone.

So while NASA expects to release the full results of the twin study within the next couple of years, we might not ever be able to draw solid conclusions from those findings. Unless the space agency gets a huge glut of twin recruits in the next few years, that is. Anyone interested?