See our solar system like you’ve never seen it before 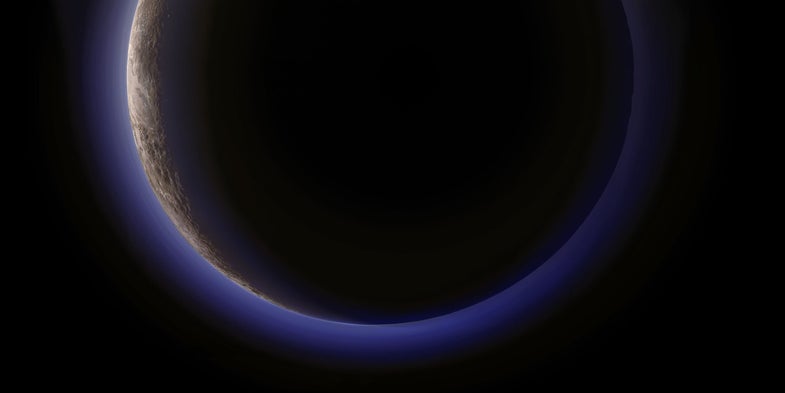 When NASA’s New Horizon’s spacecraft flew by Pluto in July 2015, a sense of astonishment was experienced by the mission’s scientists. Pluto contained a far more variegated surface than anyone had dared to hope for. And soon after the closest approach, it became clear that when back-lit by the Sun, the dwarf planet's tenuous atmosphere was as blue as the skies of Earth. Mosiac composite photograph. New Horizons, July 14, 2015. NASA/Johns Hopkins University Applied Physics Laboratory/Southwest Research Institute/Michael Benson/Kinetikon Pictures
SHARE

The following is an excerpt from Otherworlds by Michael Benson.

Editors note: to see all of the incredible, otherworldly details in these photos, click on the arrows at the top right of each image to enlarge. 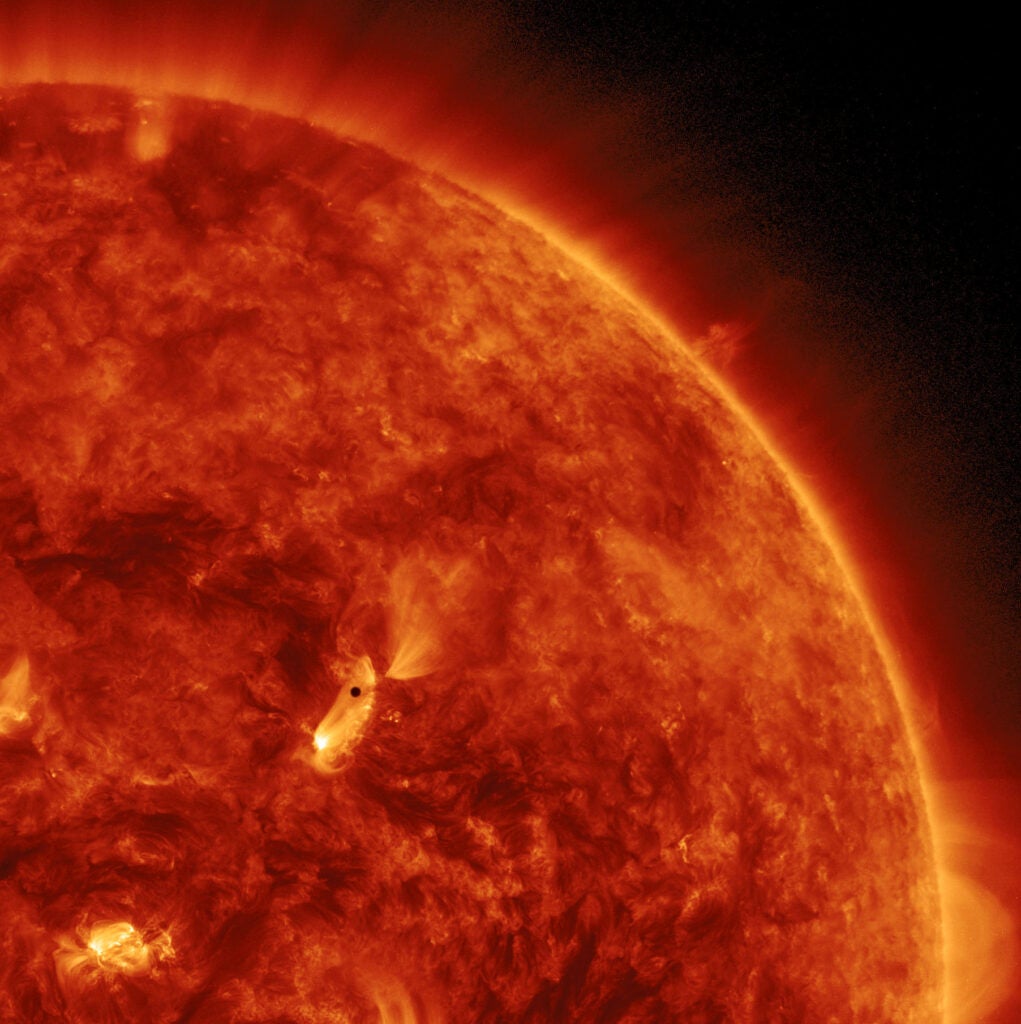 The innermost planet, Mercury, is the small black dot in the upper left. Because the solar observatory that took this picture was orbiting Earth, the true size of Mercury in relation to the Sun is apparent. The Sun contains 99.86 percent of the mass of the Solar System, and Mercury is the smallest planet. Composite ultraviolet photograph. Solar Dynamics Observatory, June 5, 2012

Lava flows from Venus’ Kunapippi Mons volcano on the right spread across the Tan-yondozo Vallis. A single bright meteor impact crater can be seen on the left. Radar image. Magellan, 9/15/1990 – 9/14/1992 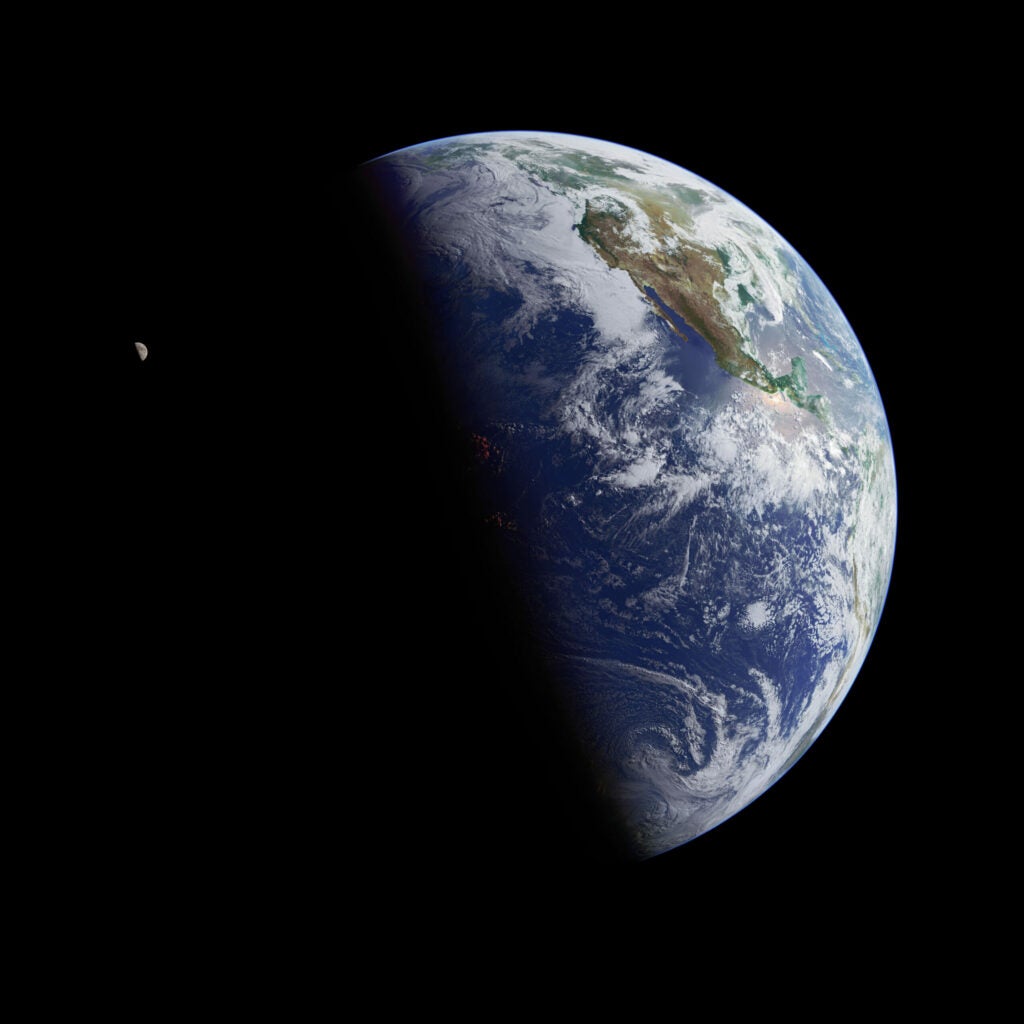 Taken above the Pacific Ocean, this geostationary satellite image captures Earth and the Moon in a single frame. In the mid-Pacific, high clouds near the planet’s day-night terminator line glow red with sunrise. Composite photograph. GOES West, May 25, 2015

The western part of the 1,900-mile-wide (3,060 kilometres) Valles Marineris canyon system is seen here covered in morning water-ice and water-vapour ground fog. The canyon is more than four miles (six and a half kilometres) deep in places, over three times deeper than the Grand Canyon in Arizona, the United States. Mosaic composite photograph. Mars Express, May 25, 2004. 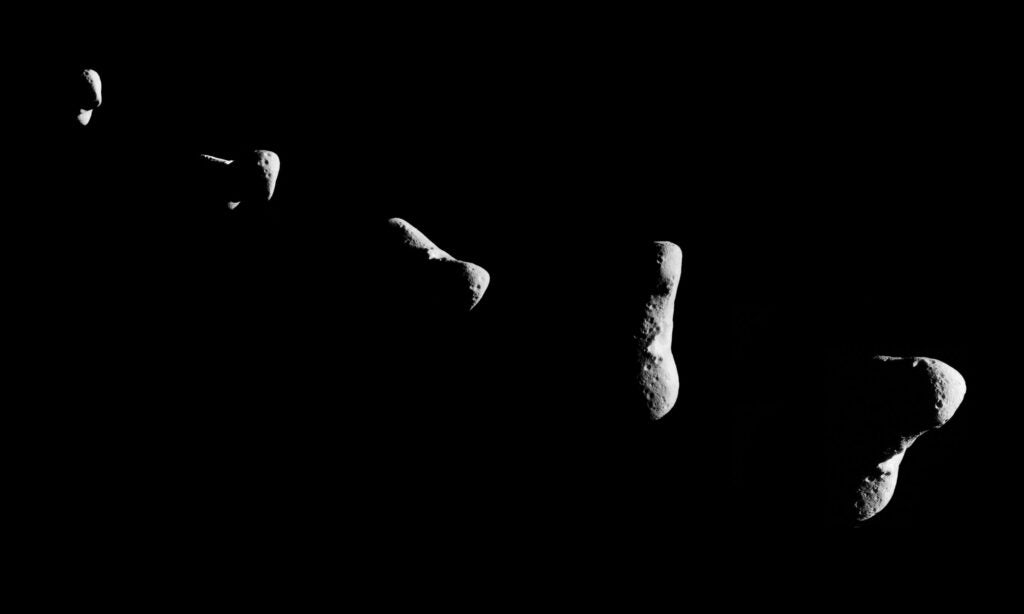 Tumbling through space, 433 Eros is the first near-Earth asteroid ever discovered, in 1898. About 21 miles (34 kilometres) long, it makes one complete rotation in just over five hours. Studying meteorites from asteroids similar to Eros tells us it may contain more gold, silver, zinc, aluminium and other useful metals than exist in Earth’s upper crust. Mosaic composite photograph. NEAR, February 16, 2000 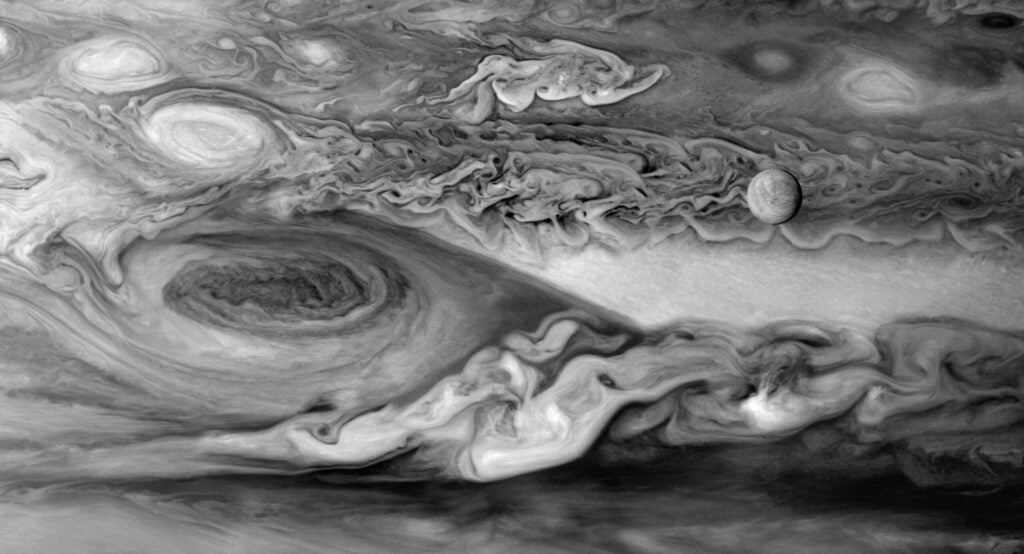 Europa and the Great Red Spot

Europa is the second closest large moon to Jupiter, and can be seen on the right hand side of this image. It is slightly smaller than Earth’s moon. To the left is Jupiter’s Great Red Spot, a vast storm system three times the size of Earth that has been raging for at least 348 years. Mosaic composite photograph. Voyager 1, March 3, 1979 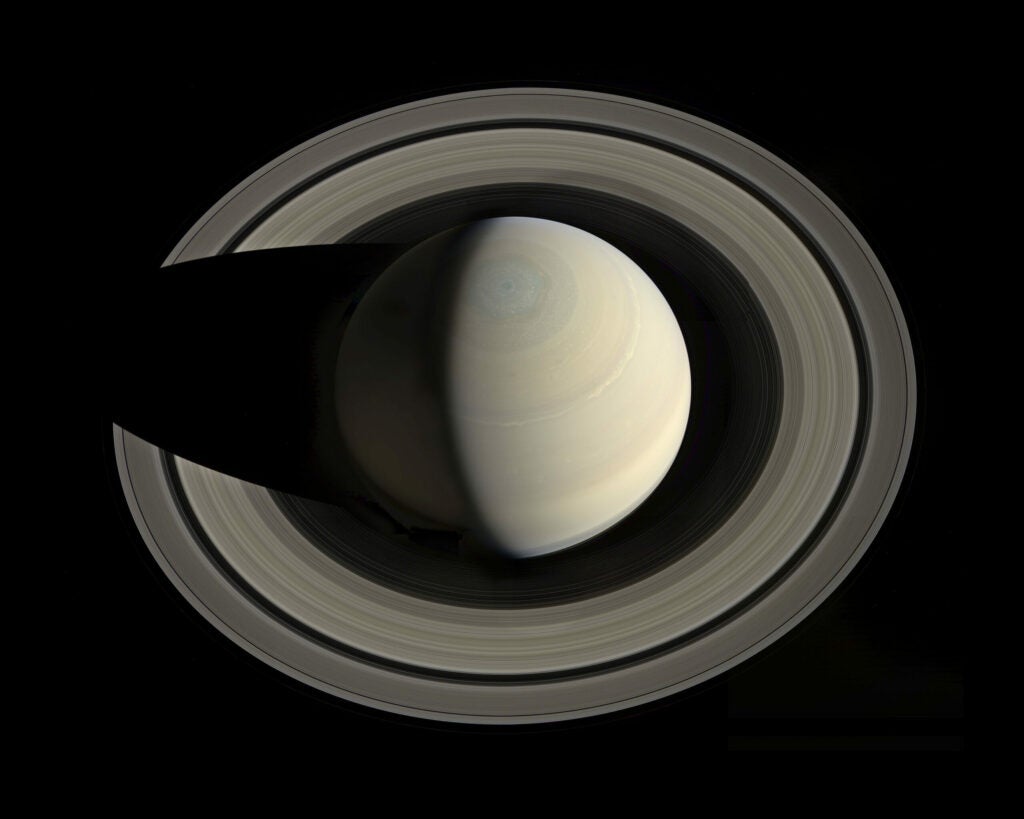 Girdled by its magnificent rings, Saturn is perhaps the most striking object in the Solar System. Here, all the planet’s main rings can be seen, lit by the Sun. The planet casts a shadow across the rings to the left. The rings reflect so much light on the planet’s night side that a perpetual twilight lingers. Mosaic composite photograph. Cassini, October 10, 2013 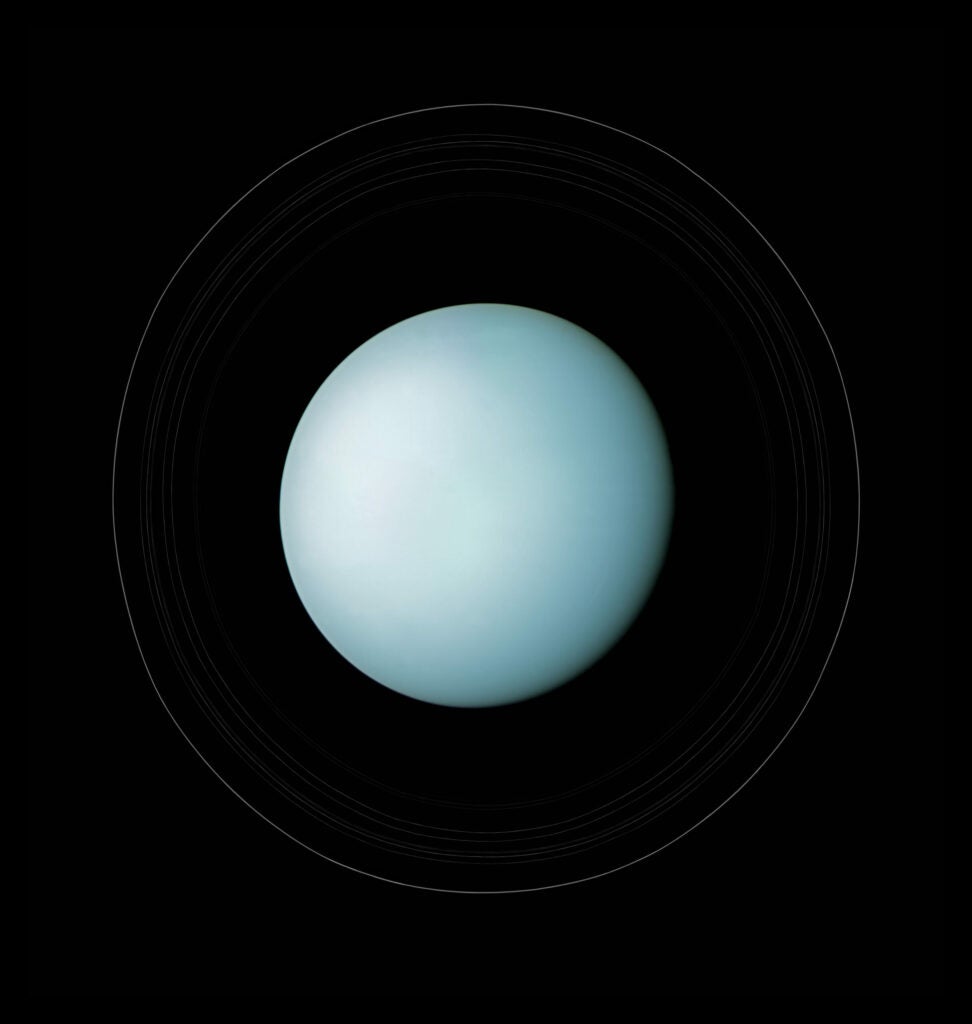 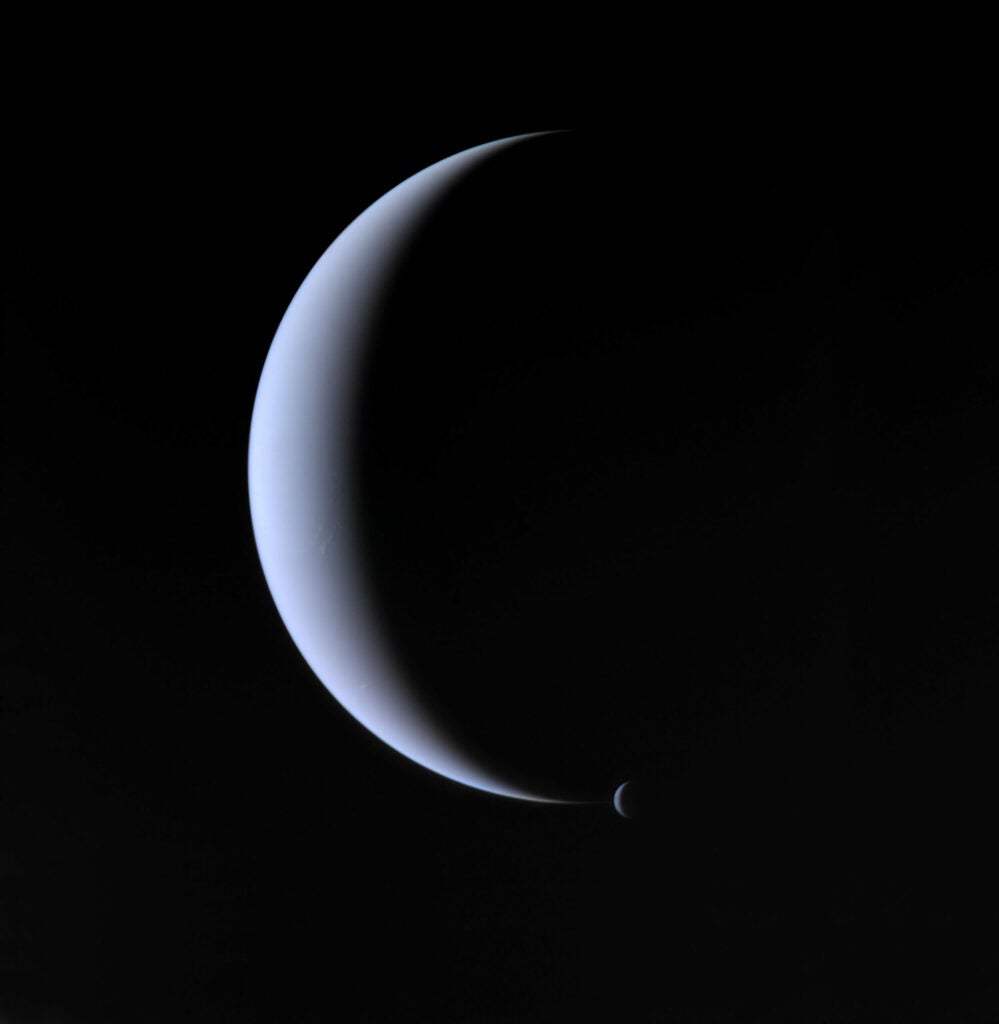 This crescent view of the outermost planet in the Solar System and its moon, Triton, is one of the last images recorded by Voyager 2 as it sped onward toward interstellar space, having surveyed all the gas giant worlds of the outer Solar System. Launched almost 40 years ago, we continue to receive transmissions from both Voyager spacecraft. Composite photograph. Voyager 2, August 31, 1989 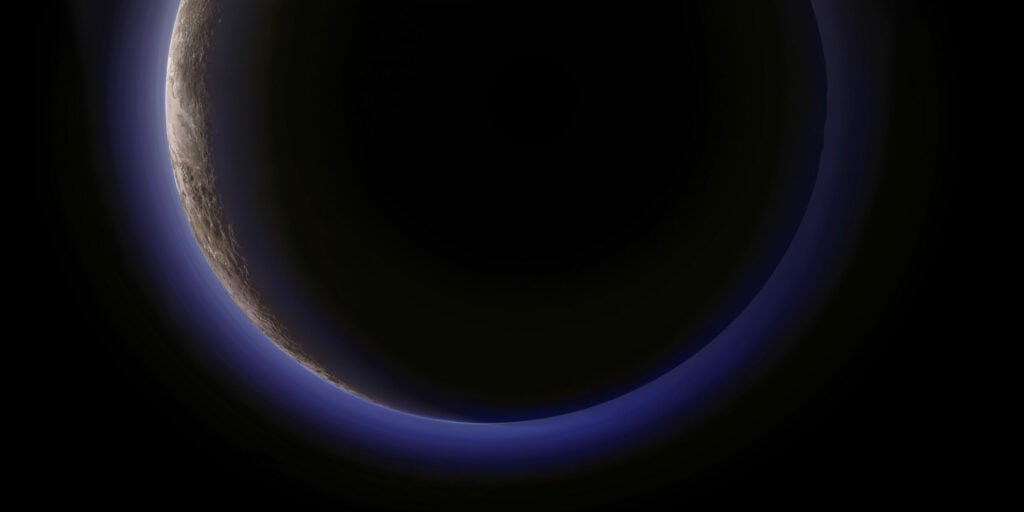 When NASA’s New Horizon’s spacecraft flew by Pluto in July 2015, a sense of astonishment was experienced by the mission’s scientists. Pluto contained a far more variegated surface than anyone had dared to hope for. And soon after the closest approach, it became clear that when back-lit by the Sun, the dwarf planet’s tenuous atmosphere was as blue as the skies of Earth. Mosiac composite photograph. New Horizons, July 14, 2015