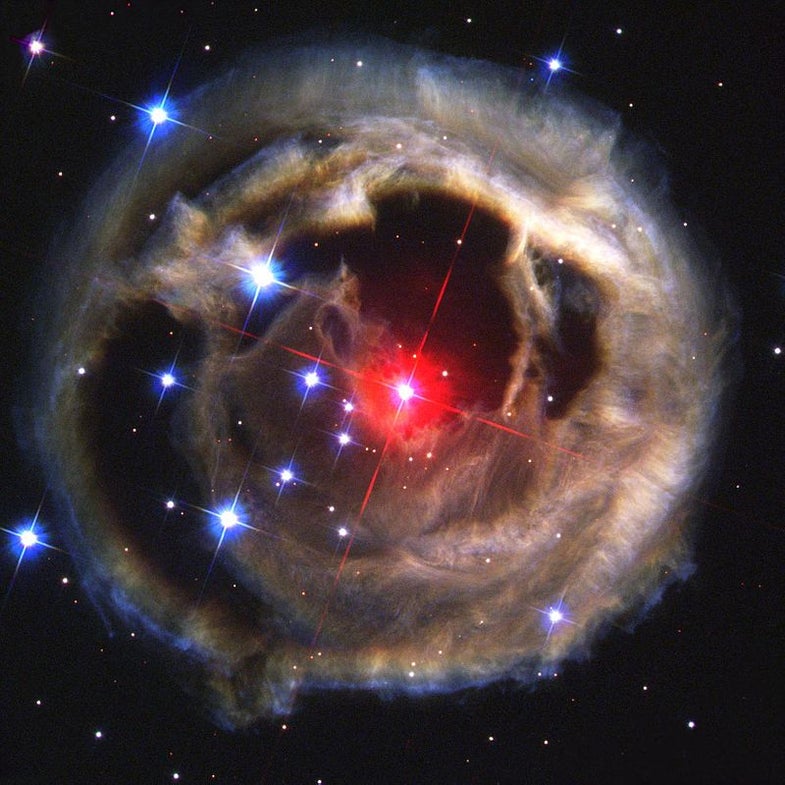 To look up into the night sky is to gaze deep, deep into the past. Light moves fast, but not fast enough for us to get an instantaneous peek at the cosmos. So when we look at some of the glowing balls of plasma that light up our sky, we’re actually seeing them as they looked thousands of years ago. Even the light from our own sun is eight minutes old before it reaches Earth.

But just because the sky is a glittering time capsule doesn’t mean we can’t occasionally see something new. Or new to us, anyway. Scientists think a massive star collision occurred about 1,800 years ago, and they’re predicting that the resulting red flash will reach our eyeballs sometime around 2022.

“It’s a one-in-a-million chance that you can predict an explosion,” Calvin College astronomer Larry Molnar said in a statement. “It’s never been done before.”

For several years now, Molner and his colleagues have been studying the binary star called KIC 9832227, located about 1,276 light-years from Earth. The team bolstered the case for its star-making quality last week at the annual meeting of the American Astronomical Society. The two stars that make up this pair in the constellation Cygnus (the swan) are spiraling towards one another, destined to collide. When they do, they’re likely to form a red nova—a red-flashing explosion resulting in one new, massive star. If the researchers are correct, their years of observation will have a massive payoff: this would be the first time scientists accurately predicted the collision of two stars ahead of time.

“The project is significant not only because of the scientific results, but also because it is likely to capture the imagination of people on the street,” said Matt Walhout, dean for research and scholarship at Calvin College. “If the prediction is correct, then for the first time in history, parents will be able to point to a dark spot in the sky and say, ‘Watch, kids, there’s a star hiding in there, but soon it’s going to light up.'”

Because the flash can’t be investigated until it “happens” (even though it actually happened almost 2,000 years ago, if happened at all), we can’t be certain we’ll get a new star out of the deal. If Molner and co.’s predictions for the binary pair’s behavior are correct, we’ll likely see something 10,000 times brighter than the stars are now—one of the brightest objects in our night sky, in fact. But it’s possible the stars aren’t on the exact crash course they’ve calculated.

“It is not a secure result,” Caltech’s Shri Kulkarni, who isn’t involved in the new research, told National Geographic’s Nadia Drake. “But not implausible either.”

Luckily, it’s not as if we’ll need fancy telescopes to fact-check this one. In five or six years, we’ll all be able to look up and determine for ourselves whether or not Molner’s conclusions were correct.